The nine lives of Mugabe: What’s next for Zimbabwe? 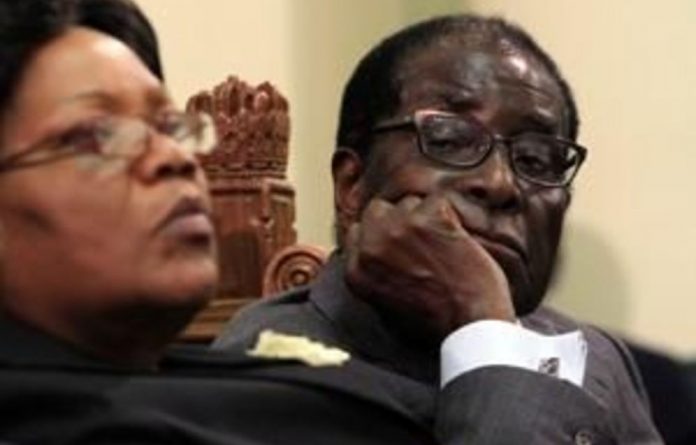 Just days before his 32nd year in power, Robert Mugabe has yet again brushed off the latest round of speculation over his future.

But in the aftermath of the sudden death of his close friend, Malawi’s Bingu wa Mutharika, and the transition there, even some of Mugabe’s allies are beginning to ask: “What will happen if Mugabe dies?”

It is a question Zanu-PF refuses to ask. Its administration secretary, Didymus Mutasa, said on Tuesday it was “unAfrican” to discuss it as long as Mugabe was alive.

The different legal opinions regarding what ought to happen should Mugabe suddenly leave the scene, Zanu-PF’s factional struggles and the increased role of the military in politics add to the fears that Zimbabwe may not be prepared for a sudden change of guard.

The prospect that there would be a standoff between rival factions was raised after Mutasa and party spokesperson Rugare Gumbo appeared to dismiss the perceived ambitions of one of the key figures in the Mugabe succession battle.

False info being embraced
Over the past two weeks the speculations about Mugabe has been more outlandish than usual. A report by a virtually unknown Zimbabwean online newspaper that Mugabe was on his deathbed went viral.

The reports came after a week in which superstitious Zimbabweans had been gripped by a “prophecy” by a popular local preacher that the country faced a major event that would lead to chaos. Local papers interpreted it as Mugabe’s death.

All that speculation and the events in Malawi, closely followed in Zimbabwe, have whipped up national debate over how well the country would handle its own transition.

Zimbabwe celebrates 32 years of independence on April 18 and an entire generation has not known any other leader than Mugabe. He has spent the past three decades building an image of a leader indispensable to his party and his country.

However, even within his party many are daring to debate what would happen once he does go.

The coalition agreement states that, in the event the president is no longer able to hold office or has died, Zanu-PF must nominate a replacement because it has title to the presidency. But some experts wonder whether this requirement replaces a constitutional provision that Parliament would have to sit to vote in a replacement.

Should Zanu-PF follow its hierarchy, its nominee would have to be Vice-President Joice Mujuru. But although Mujuru has grassroots appeal, her relations with the influential military are perceived as weaker than those of her rival, Defence Minister Emmerson Mnangagwa.

Hierarchy must be followed
Mnangagwa’s growing ambition would probably encounter opposition, however. According to Mutasa, only Mujuru and party chairperson Simon Khaya Moyo can take over. “We have a hierarchy in our party,” he said.

Zanu-PF spokesperson Rugare Gumbo also told the Mail & Guardian that Mnangagwa was “way down” the pecking order and could not “leapfrog the order of the party”. It suggests a major power struggle would ensue should Mnangagwa choose to pursue his ambitions. According to political analyst John Makumbe, this “is something that could cause a meltdown in the political realm”.

At the root of the succession riddle has been Mugabe’s deliberate strategy to centralise power around himself. He has never ceded any real decision-making power to any of his lieutenants, leaving them to depend entirely on him.

This was displayed this week when, in his absence, two Cabinet meetings were put off and critical meetings on the new Constitution and the controversial empowerment laws were cancelled. “Whatever would have been decided in those meetings would have been null and void as soon as he comes back,” a government minister told the M&G.

Some in Zanu-PF privately want to see the back of Mugabe because they are afraid his clinging to power will continue to weigh the party down. But they will not dare to oppose him publicly, fearful of losing influence and privilege.

Recently, the divisions clearly showed when Mugabe publicly threatened lieutenants he had accused of opposing his plan for an unpopular new election.

“I am told that there are some among us who do not want elections this year. If you are here, you can go and join the [Movement for Democratic Change],” Mugabe told his central committee.

The rumour mill went into turbo-drive amid persistent murmurs of Mugabe’s ill-health. He left for Singapore two weeks ago and, according to the office of the president, travelled to the Asian nation to secure a postgraduate place for his daughter, Bona.

Last week, the Cabinet also failed to meet because Mugabe, who chairs the weekly meetings, was absent and Zanu-PF ministers snubbed a council of ministers meeting set up by Prime Minister Morgan Tsvangirai.

But it is Mugabe’s prolonged absence that had sparked intense speculation, fuelled by media reports at the weekend. The main originator was an obscure, small news website, the Zimbabwe Mail, which reported that the 88-year-old was “fighting for his life on a hospital bed” in Singapore.

“A senior Zanu-PF official, whose identity cannot be revealed, said the president was undergoing intensive treatment in Singapore and he also confirmed that some members of his family had since joined him after boarding a chartered private jet on Saturday evening,” the website claimed.

Underscoring the anxiety that gripped the three-year-old unity government this week, the opposition Movement for Democratic Change (MDC) convened an “emergency” standing committee meeting on Tuesday morning at its Harvest House headquarters to “prepare for any eventualities”. The meeting was attended by senior MDC officials, among them Tsvangirai, secretary general Tendai Biti and national organising secretary Nelson Chamisa.

In an interview with the Mail & Guardian at its headquarters, MDC spokesperson Douglas Mwonzora confirmed that Mugabe’s ill-health had not only shaken Zanu-PF’s ranks, but had also sent shock waves through the MDC.

Mwonzora did dismiss the severity of Mugabe’s ill-health, however.

“The real motive [for Mugabe’s trip to Singapore] was for health,” Mwonzora said. “The president collapsed and was flown at night to Singapore, but he is now okay. We have it on good authority that one of his eyes lost pressure and that is why he was speedily taken to Singapore.

“The behaviour of the office of the president caused us to be suspicious. We wondered how it would take two weeks to get a university place for Bona and through that we realised there was something wrong.”

Last year Mugabe travelled often to Singapore for medical attention — the veteran leader is understood to suffer from prostate cancer. But Minister of Information and Publicity Webster Shamu denied this week’s media reports that Mugabe was on the brink of death. “It’s a lot of hogwash. This is not the first time we have heard these rumours. If anything like that had happened, we would have issued a statement.”

Gumbo told the M&G: “We expect the president in the country in 48 hours [on Thursday]. His absence was planned and has not caught anyone in the party by surprise. He went on family business as he is very supportive of his children and is close to his family.”

Meanwhile, the Parliamentary committee tasked with writing a new Constitution completed its work on Tuesday and is eagerly waiting for Mugabe’s return to the country to present him with a draft copy. The draft is set to be presented to a second “stakeholders’ meeting” later this month.

Mwonzora hailed it as the first truly democratic document to come out of Zimbabwe after three decades of independence. The highlights of the proposed new Constitution will include the devolution of power, abolishment of the positions of prime minister and deputy president position, power checks between the executive and legislature and a 50% quota for ­gender representation in state institutions. — Ray Ndlovu