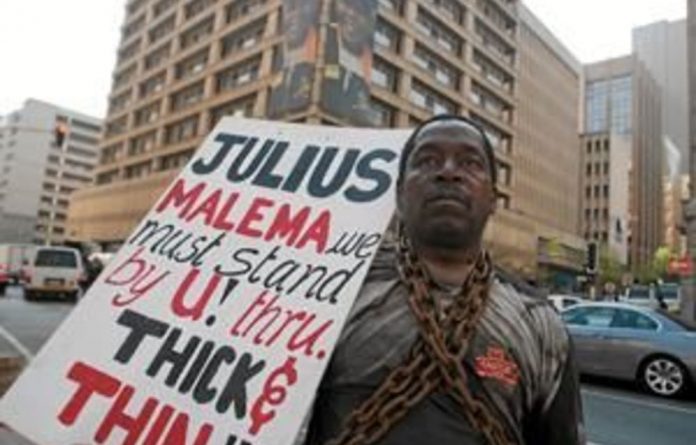 Now this outspoken former prisoner is embarking on a new campaign in support of the man he claims never to have met in person.

His independent civil society group, National and International Friends of Julius Malema and the ANCYL Campaign, intends to launch its campaign next week with a website, Facebook page and SMS hotline account for messages of support.

Bhudu (49) told the Mail & Guardian the campaign would also focus on raising money for any legal battles Malema might face, including problems he might encounter with the investigation into his business activities that is being carried out by the Hawks. The campaign is in the process of being registered as a non-profit organisation.

All this, he said, was being done for a man he had never met.

“I’ve seen Julius Malema on television and read about him, just like most people. I have never had a cup of tea with him and I’ve never sat in a glorious shebeen with him.

Malema a lot like Sobukwe
Bhudu likened Malema to Robert Sobukwe, who initiated a break­away from the ANC, founding the Pan Africanist Congress. Although he had been expelled from the ANC, Malema was as popular today as he had always been, Bhudu alleged, and the fact that he had access to financial resources should not bother anybody.

“Without having access to financial resources, he would not be as popular or famous as he is today,” he said. “We know the resources he has access to he has not gained through the barrel of a gun or through a cash-in-transit robbery.”

Many people would “love to see Malema being found guilty to silence him for once and for always” and it was for this reason, he said, that he had made contact with Floyd Shivambu, the ANC Youth League spokesperson who was recently expelled from the ANC for three years, to tell him about his campaign.

Shivambu had put him in touch with a “middleman” in case Bhudu wanted to make contact with either him or Malema, he said, without explaining why this was necessary. “We will stand with Julius Malema until the bitter end and help him get the best legal assistance,” he said.

Bhudu, the spokesperson for the South African Prisoners’ Organisation for Human Rights, denied his stance had anything to do with the factionalism in the ANC. “We have absolutely nothing against [President Jacob] Zuma as the president of this country. It has got to do with the land and the wealth, which has to be distributed.”

Jailbird?
Three years ago, Bhudu spent five months in a Johannesburg prison before being granted bail of R10000 after he was convicted of aiding and abetting the escape of Israeli national Moti Sabag while he was being transported to the Lindela repatriation centre for deportation in 2005.

A laboratory technician with a national diploma in analytical chemistry, Bhudu served five years in prison for breaking into a furniture store with three others. At the time he pleaded not guilty, but he now admits to having committed the crime when he was broke and unemployed.

In prison, he put his skills to good use, teaching Afrikaans, maths and biology to other prisoners and founding an organisation to give prisoners a voice, he said.

Bhudu is now works for an organisation started by Julie Mashele, who had spent seven years awaiting trial on theft, car hijacking and fraud charge before the case against her was dropped. He receives a stipend from her Dream Team Foundation.

“My wife, Gloria Ruth Bhudu, is a manager at the Randburg Post Office and we manage [to survive]. I paid off our house and furniture when I was working full-time for the South African Prisoners’ Organisation for Human Rights, and so we do fine.”

Attempts to reach Malema for comment on Bhudu’s campaign in his honour were unsuccessful. A woman answered his cellphone but then ended the call.