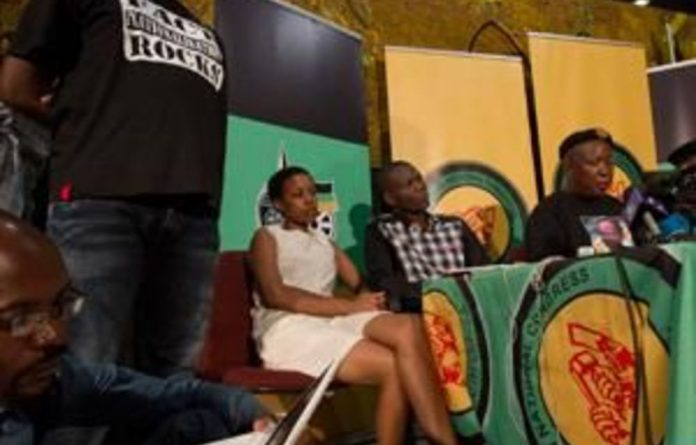 With Julius Malema facing possible expulsion from the ANC and its youth wing, his fellow leaders in the ANC Youth League’s national executive committee are divided over whether to support or dump him.

Until recently the youth league has been united behind its embattled president. But, as it is becoming increasingly likely that the ANC’s appeals committee will uphold the national disciplinary committee’s decision to expel Malema, youth league leaders are lining up for the league’s top job.

The Mail & Guardian has also learned that the pro-Malema group is planning to propose a “truth” tribunal for all ANC members who commit acts of ill-discipline or misconduct to appear before. Among other things, the proposed tribunal, which would be headed by ANC veterans, would attempt to find the root causes of ill-discipline in the organisation and find long-lasting solutions to address the problems.

Initially suggested by the youth league in Gauteng, the aim of the proposed tribunal would be to rehabilitate transgressors and serve as a platform where they could confess and ask for absolution for bringing the party into disrepute.

The youth league is suggesting that the tribunal should be given the power to subpoena any member of the ANC, including President Jacob Zuma, to appear before it. It would also encourage the ANC leadership to deal consistently with acts of ill-discipline within its ranks.

The youth league leaders in all nine provinces said this week they would defy any decision to expel Malema and would recognise him as president until the league’s next congress in 2014.

Scared for Juju’s safety?
It is understood that some senior ANC leaders are worried about the safety of Malema and have suggested the youth league leader should consider accepting a nomination by several countries, including Germany, Angola, Zimbabwe, Cuba, Venezuela and Brazil, to serve as president of the International Union of Socialist Youth.

Those who want Malema out include the league’s treasurer Pule Mabe, and national executive committee members Stanley Galane and Lebogang Maile.

On the other hand, those who want Malema to remain in his position include his deputy Ronald Lamola, the league’s secretary general Sindiso Magaqa, its spokesperson, Floyd Shivambu, and national executive committee members Thabo Kupa, Andile Lungisa and Jacob Lebogo.

Apparently Malema’s opponents on the league’s national executive committee are planning to distance themselves from Malema’s remarks that Zuma is a dictator when they gather at a meeting of the committee on Sunday. It was planned for Monday this week but was postponed at the 11th hour because not all its members could attend.

The hearing into Malema’s appeal started on Thursday but has been postponed. He is expected to argue for the case to be dropped because it has taken more than six months to be completed. In terms of the ANC constitution’s rule 25.10, all disciplinary proceedings must be disposed of expeditiously and within six months from the date that the notice of the charge is delivered to the member. Failure to complete the disciplinary process within that period is regarded as a violation of the rights of the accused.

Ditched by his supporters
Although senior leaders in the ANC supported Malema in the past, largely on the grounds that the charges against him emanated from the league’s congress resolutions taken in June last year, some are now saying Malema’s attack on Zuma was not the position of the organisation and that he must take responsibility for his actions.

Malema’s supporters believe that the disciplinary action was linked to the ANC’s succession battle in Mangaung in December. Malema and his supporters are known to want ANC deputy president Kgalema Motlanthe to replace Zuma as ANC president and Sports Minister Fikile Mbalula to take over from Gwede Mantashe as ANC secretary general.

If the anti-Malema group succeeds in ousting the firebrand youth leader and their favoured candidate for the position of president is elected, the youth league is most likely to call for the status quo to remain and to support the re-election of Zuma as ANC president.

Unlike in 2007 in the run-up to Polokwane, the road to Mangaung is proving to be difficult for Zuma as his once-trusted allies, the youth league and a powerful bloc within labour federation Cosatu, led by general secretary Zwelinzima Vavi, have turned their backs on him. He only enjoys solid support from the South African Communist Party, a junior partner in the tripartite alliance.

Shadrack Tlhaole — Northern Cape youth league chairperson
‘We stand firm behind the leadership of Julius Malema. When Malema went to address [Wits] university, he was wearing the cap of the youth league. After Polokwane, when the current leadership was elected, we said that the biggest problem in the country was Thabo Mbeki. Mbeki never even wrote to the ANC to charge or fire the ANC. Why can’t the ANC write something and say to the youth that they are not dictators?

‘Some of us would agree that we are under a dictator. It is unconstitutional for us not to be given a fair hearing. It is not that we were charged for misconduct because we were charged for corruption. The youth league did not rape anyone, and we did not steal from anyone. No one has brought any [criminal] charges against us.”

Frans Moshwane — Limpopo youth league chairperson
‘As the Limpopo youth league, we would continue to support Malema as president. Malema is a victim of the ANC succession battle in Mangaung. There is nothing that warranted any action against him. All these things are products of Mangaung. Malema was making a political opinion as he has always done with other presidents of the ANC. What he said warranted debate and if people differ with his views, they should put a counter- argument on the table so that we can engage.”

Senzeni Mphila — Western Cape youth league co-ordinator
‘As far as we are concerned, Julius will remain president until 2014. There is nothing that Julius has betrayed [with regards to] the youth league. He is the custodian of the youth league and what he says represents the interest and aspirations of the young people of South Africa.

‘There is no discussion around the leadership of the league and those who are sell-outs with uncontrollable ambitions will fall aside.”

Lebogang Mogoera — Free State youth league provincial secretary
‘We continue to support our president [Malema] because he is being persecuted for articulating the resolutions of our congress, which we are not prepared to abandon. We are disappointed with the statement made by President Jacob Zuma during the New Age breakfast meeting, where he said that the ANC Youth League would have to elect a new president when Malema was finally expelled. We find this problematic because President Zuma is a complainant in the matter and it undermines the disciplinary processes. We must wait for the completion of the process. Nobody can pre-empt the elective congress, the highest decision-making body of the ANC.”

Clarence Maseko — Mpumalanga acting youth league chairperson
‘The position of the province is that we are unwavering in our commitment that Malema remains president. We believe that Malema has been unfairly treated in the processes of the ANC. When Julius said to the whole country that the problem was Mbeki, it was the same organisation, but how was the matter dealt with?”

Papiki Baboile — North West youth league provincial secretary
‘We elected Malema democratically in June at the national congress and we will continue to support him through his trials and tribulations. He was charged for articulating the resolutions of the national congress that all of us agreed to. The position of Malema cannot be occupied by anyone. We remain steadfast that it should not be filled. Those who want to replace him must wait for their turn. We will also present this position at the upcoming youth league national executive committee.”

Ayanda Kasa-Ntsobi — Gauteng youth league provincial secretary
‘We have not been informed as the provincial executive committee [of the suspension of Malema by the ANC]. The PEC hasn’t yet reflected and assessed the matter. We have no comment.”

Mzonke Ndabeni — Eastern Cape youth league secretary
‘As a province, we were shocked by the announcement that Malema was summarily suspended. We are still firmly behind the leadership of the youth league. The matter was thoroughly discussed by the structures during the lekgotla this week. Members were very disturbed. We will dig in our heels and insist on a meeting with the ANC.”

Vukani Ndlovu — KwaZulu-Natal youth league provincial task team co-ordinator
‘There is no crisis in the league. Our mandate is clear: the leadership will remain until 2014.” — Michelle Pietersen, Matuma Letsoalo and Charles Molele