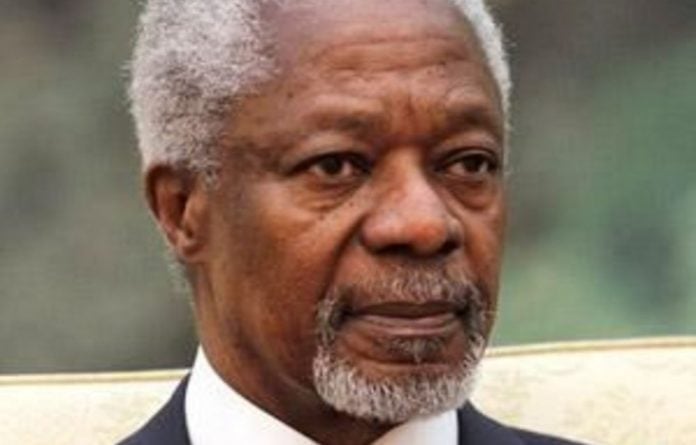 A team of UN ceasefire monitors started work in Syria on Monday, seeking to ensure that both government forces and the opposition respect the terms of a truce, mediator Kofi Annan’s spokesperson said.

“The mission will start with setting up operating headquarters this morning [Monday], and reaching out to the Syrian government and the opposition forces so that both sides fully understand the role of the UN observers,” spokesperson Ahmad Fawzi said in a statement.

“The remaining 25 are expected to arrive in the next few days,” he said.

The United Nations security council agreed on Saturday to send the unarmed monitors to supervise the ceasefire that officially began last Thursday but has been marked by reports of violence and shelling in the flashpoint city of Homs.

On Sunday, Fawzi said he expected the security council to adopt a second resolution by the end of the week to authorise the deployment of a full observer mission of at least 250 monitors, including human rights experts.

Peace plan
The monitors’ mission was to oversee a shaky ceasefire undermined by persistent violence and the shelling of the opposition stronghold of Homs by forces loyal to Syria’s President Bashar al-Assad.

The ceasefire is part of a broader peace plan brokered by Annan, but it looked increasingly under threat throughout the weekend as the government vowed a crackdown on a wave of “terrorist attacks” in Syria.

An advance team of five unarmed monitors arrived in the capital Damascus on Sunday evening, a Reuters witness said.

A Syrian official escorting the team at a Damascus hotel told Reuters that more observers were expected to arrive on Monday, but offered no details. Under the U.N. plan, two dozen more observers are due to enter Syria in coming days.

As the monitors prepared to embark on their mission, violence persisted on the ground.

One activist said the city of Homs, one of the hotbeds of opposition to Assad, was bombarded on Sunday by government forces at a rate of “one shell per minute”.

Other activist sources said that six people had been killed on Sunday, and four bodies had been found.

Casting further doubt on whether the ceasefire would hold, Syria said it would stop what it called “terrorist groups” from committing criminal acts, state television reported.

Annan, joint special envoy of the United Nations and Arab League, brokered the six-point peace plan in March as part of international efforts to stop 13 months of violence.

The plan calls for the start of political dialogue, the delivery of humanitarian assistance, the release of prisoners including those involved in peaceful protests, freedom of movement for journalists to work throughout Syria.

The security council authorised the deployment of up to 30 unarmed observers on Saturday in the first resolution on Syria the 15-nation council managed to approve unanimously since the uprising erupted in March 2011.

Violence in Homs
Syria blames the violence on what it says are terrorists seeking to topple Assad. It has denied journalists access to the country, making it impossible to independently verify reports.

“Since the announcement of an end to military operations, terrorist attacks have increased by dozens, causing a large loss of life,” SANA added.

“[Security forces], based on their duty to protect civilians and the country, will stop terrorist groups from continuing their criminals acts and the killing of civilians,” SANA said.

UN secretary general Ban Ki-moon said he was concerned about the shelling of Homs and urged the Syrian government to refrain from any escalation of violence.

Annan’s spokesperson said the mission could be expanded to 250 or more but that would require another resolution.

Syrian government spokesperson Bouthaina Shaaban said Syria could not be responsible for the safety of the monitors unless it was involved in “all steps on the ground”.

On the eve of the mission, Syrian forces pounded Homs, activists said. “Early this morning we saw a helicopter and a spotter plane fly overhead. Ten minutes later, there was heavy shelling,” said Walid al-Fares, a local activist.

Activist video footage, reportedly from Khalidiya, shows an explosion shortly after the sound of a missile flying through the air. Another whiz follows, and the cameraman, standing in a nearby building, pans across to show a ball of flames and smoke rising into the air. — Reuters

More than 50 women have accused Ebola aid workers from the World Health Organisation (WHO) and leading nongovernmental organisations of sexual...
Read more
Environment

The ANC has, until now, always rejected going to the International Monetary Fund, which underscores how bad our economic situation is
Read more
Africa