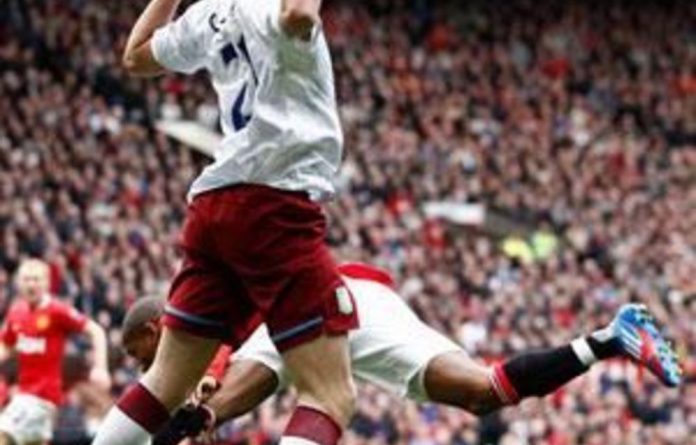 Sir Alex Ferguson has defended winger Ashley Young from accusations of cheating after Manchester United closed in on their 20th English league title with a 4-0 victory over Aston Villa.

The victory featured two goals from Wayne Rooney, who took his tally for the season to 31, the first of which came from the penalty spot after Young won a hotly disputed sixth-minute spot kick after going down under contact from Ciaran Clark.

While TV replays showed there was some contact, pundits quickly said Young seemed to “go looking” for the collision and fell down theatrically to convince referee Mark Halsey.

The decision followed Young winning an equally contentious decision in United’s previous home game against Queens Park Rangers and will see the behaviour of the former Villa winger once more come under close scrutiny.

Ferguson conceded that Young “played” for the penalty and fears his man may be gaining an unwanted reputation but insisted that it was a legitimate penalty call.

“I think he played for the penalty,” said Ferguson. “If the player decides to put his foot in and doesn’t straighten his own feet and read the situation, then he’s fallen into that … He’s there for the taking. I think it was a dramatic fall, I think maybe he overdid the fall. But it was a penalty, there was no doubt about that. I don’t think there can be any complaints as he does take him … Good defending has always been good defending. He’s a young lad, don’t forget, and if they read the game and keep their feet they should really cope with that … He’s bought the fact Ashley has jinked in and come inside him. He’s gone down quite easily but it was a penalty, he was definitely brought down.”

‘A diver’
Given the instant and angry reaction to the penalty incident, Ferguson, however, does concede that there is a danger of Young becoming known as a “diver”.

“Yes. I think in that situation, the last week or two, yes,” said Ferguson.

“I’ve never seen that in him, it’s not a habitual thing in him. He was brought down, he just made the most of it.”

United’s victory, which also featured an effort from Danny Welbeck and Nani’s first goal since December, was the perfect response to Manchester City’s emphatic 6-1 victory at Norwich a day earlier, as well as United’s surprise midweek loss at Wigan.

It also restored a five-point lead at the top of the table.

Intriguingly, the Manchester derby at City’s Etihad Stadium at the end of the month is now looking a possible, if not likely, place for United to clinch the title although Ferguson is taking nothing for granted.

“There could be twists and turns yet but the name of the game is to enjoy ourselves, play with the expression we did in this game and hopefully we will be alright,” said Ferguson.

“You can never be too confident. My experience tells me there is always something that is going to bite you on the bum. Hopefully we can avoid that, the name of the game is not dropping any more points … It’s one game less. That is what I take out of the game. We’ve won our game with a good performance which is good at this time of the year. The players accepted the fact we lost the game on Wednesday and did something about it. There was no panic.”

Villa manager Alex McLeish declined to join the debate over whether or not Young dived to win the contentious penalty but did feel that the decision was incorrect.

“I think the players are long enough in the tooth,” he said. “We know Ashley will jink in and out. We don’t give special instructions and say be careful of Ashley getting a penalty but you have to be reliant on the officials getting it right … We’ve seen examples of that before but I don’t want to get into an Ashley Young debate. It’s been given, we’ve suffered from it, end of story … The game is played at such a fast pace at this level and one touch football at the top level is quicker than the human eye. We feel a little bit aggrieved at certain decisions over the last couple of weeks.” — AFP