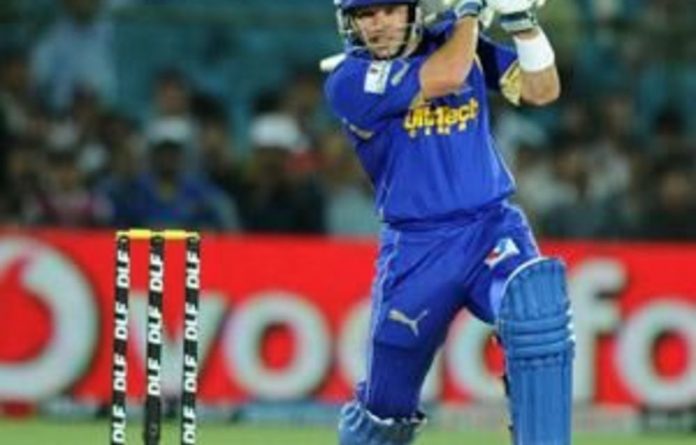 Australian batsman Brad Hodge hammered 48 not out off 21 balls on Tuesday to lead Rajasthan to a five-wicket win over Deccan Chargers, taking the Royals back to the top of the Indian Premier League table.

In-form Ajinkya Rahane hit 44 and captain Rahul Dravid 42 to be the other contributors in Rajasthan’s victory.

Rajasthan had looked on course until leg spinner Amit Mishra brought Deccan back into the game from the 12th over, taking 3-32 that included the wickets of Rahane and the dangerous Owais Shah.

Rahane leads the tournament with 304 runs, including a top score of 103 not out against Royal Challengers Bangalore, but he was caught at long off. Shah holed out to deep mid-wicket.

For Deccan, South African batsman JP Duminy (58 not out) and Shikhar Dhawan (52) were the main scorers.

Duminy capitalized following a sparkling 94-run stand between left-handed openers Kumar Sangakkara (44) and Dhawan that set the base for a huge total.

Duminy, who played for Mumbai Indians before moving to Deccan last year, smashed two consecutive sixes off both pace bowlers Amit Singh and Pankaj Singh in the final two overs of the innings to boost the total.

Duminy added 88 in an unbroken third-wicket stand with Australian all-rounder Daniel Christian, who chipped in with 29 off 19 balls with one six and two fours.

Rajasthan recorded its fourth win from six games, while Deccan is without a victory after three matches. — Sapa-AP