Cosatu sets in motion the ‘mother of all protests’ 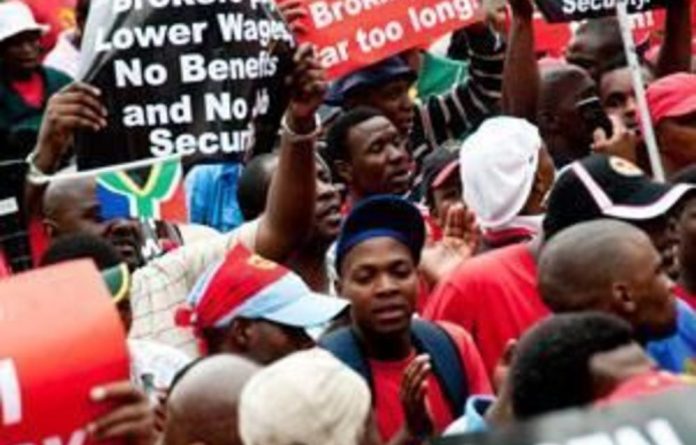 The Congress of South African Trade Unions (Cosatu) will encourage its two million members to take part in a national protest against the e-tolling system, it said on Tuesday.

“[Cosatu] is mobilising its two million members for the mother of all protests against the act of highway robbery set to be committed from 30 April 2012 — the Gauteng e-tolls,” spokesperson Patrick Craven said in a statement.

“We are confident that we will be joined by many thousands more angry residents and motorists who support our demand for the scrapping of these tolls.”

Cosatu is planning several rallies, marches, demonstrations and night vigils at the offices of the South African National Roads Agency Limited (Sanral) and the transport department across the country from April 23.

These would lead up to a large “national stay-away or socio-economic strike” on April 30.

Craven said opposition to the tolls was “overwhelming”, especially to the new punitive rate which will be applied to motorists who do not get windscreen-mounted e-tags.

“These threats will have the exact opposite effect. They will infuriate people and make them even more determined to follow Cosatu’s advice not to register and not to buy an e-tag,” he said.

“In the end, however, it is the pressure of the masses which will force government to back down. People power has brought down governments in North Africa; it can surely stop this assault on our living standards.”

Recovering costs
On March 7 thousands of people participated in Cosatu’s nationwide march against the tolls.

Alternate users (people without e-tags) will be charged R1.75/km, compared to the standard tariff of 30c/km for registered users.

It said the higher fee was because of the need to recover costs, including invoicing and debt collection.

On Tuesday, several organisations and political parties raised concerns about the tariffs and asked Sanral to postpone the launch.

The South African Chamber of Commerce and Industry said it was “concerned by the uncertainty” surrounding the fee system and the exemptions for public transport.

“This makes a clear case for delaying implementation until there is clarity on the toll fees and exemptions for certain road users,” it said.

Public concerns
Business Unity South Africa (Busa) called for a delay in implementation until the public’s concerns had been fully addressed.

“Unless these serious practical problems can be timeously resolved, Busa sincerely believes that the magnitude of challenges facing the e-toll system in Gauteng justify delaying its implementation … to a later date.”

Afrikaner lobby group AfriForum instructed its lawyers on Tuesday to urgently prepare court papers in an attempt to stop the launch.

“The public is asked to wait for the outcome of the proposed legal action of AfriForum and other groups, before deciding whether to register for e-toll at all,” said AfriForum chief executive Kallie Kriel said.

The National Council of Societies for the Prevention of Cruelty to Animals said the tariffs would severely impact its ability to rescue animals.

“We do not receive any funds whatsoever from national or local government and exemption from Sanral was denied … [we are] now in a position whereby we shall have no option but to use public funds to pay for our vehicles to be allowed onto freeways as we go to assist animals,” it said.

On Monday, national consumer commissioner Mamodupi Mohlala said she would look into a complaint by the Democratic Alliance about the punitive rate. — Sapa

With large-scale job losses on the horizon here and around the world, the Covid- 19 pandemic has put the vulnerability of workers in sharp focus
Read more
Business

Lisa Seftel started out in the labour movement before she took up positions in government. Now, as the head of Nedlac, she has to create a space where both sides can meet to discuss and debate important policy issues
Read more
National