Norwegian mass killer ‘would have done it again’ 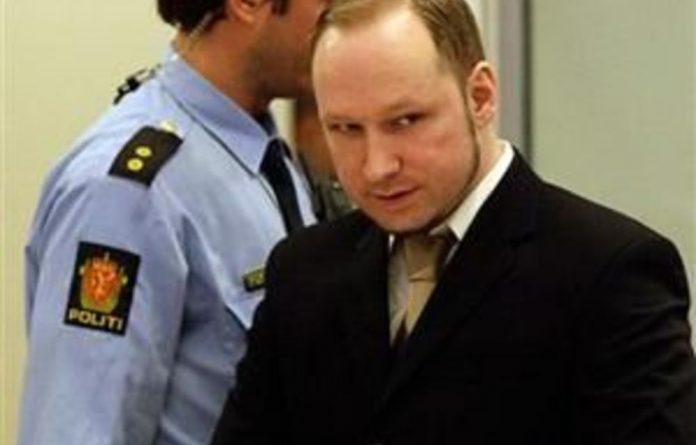 The gunman behind the Norway massacre said he was inspired by al-Qaeda as he took the stand Tuesday at his trial, after a judge who called for him to face the death penalty was dismissed.

Right wing extremist Anders Behring Breivik said his attacks last year were aimed at defending “ethnic Norwegians” from rising multiculturalism, and that he “would have done it again”.

Insisting “universal human rights” gave him the mandate to carry out his acts, he described himself as a “militant nationalist” and, using the pronoun ‘we’ to suggest he was part of a larger group, added: “We have drawn from al-Qaeda and militant Islamists.”

“You can see al-Qaeda as the most successful militant group in the world,” Breivik told the court during questioning on the second day of the trial.

Granted clearance earlier to address the court with a prepared text, Breivik described his killing of 77 people on July 22 last year as a “preventive” attack to avoid a European culture war with Muslims.

After describing Christians as “a persecuted minority,” the 33-year-old asked the court to acquit him while making clear he had no remorse over the bomb attack in central Oslo and shooting spree on a nearby island.

Breivik said that spending his life in prison or dying for his people would be “the biggest honour”.

Breivik had been granted 30 minutes to speak but ended up lecturing for 73 minutes, as chief judge Wenche Elizabeth Arntzen repeatedly urged him to wrap up quickly though the prosecution supported Breivik’s wish to go on.

Shooting spree
On July 22 last year, Breivik first killed eight people when he set off a bomb in a van parked outside buildings housing the offices of Labour Prime Minister Jens Stoltenberg, who was not present at the time.

He then travelled to Utøya island where, dressed as a police officer, he spent more than an hour methodically shooting at hundreds of people attending a ruling Labour Party youth summer camp.

The shooting spree claimed 69 lives, mostly teens trapped on the small heart-shaped island surrounded by icy waters. It was the deadliest massacre ever committed by a lone gunman.

Breivik on Tuesday evoked the idea of accomplices, telling the court during questioning that two other one-person “cells” existed.

“I am a self-run and independent cell, and I am connected to two others,” he told the Oslo District Court.

Police have previously said they had not been able to prove he had accomplices.

In his address to the judges, Breivik compared the Labour Party’s youth wing AUF to the Hitler Youth, saying he targeted them on Utøya because “most AUFs are naive and indoctrinated”.

“These were not innocent children but political activists,” Breivik argued, as survivors and relatives of the victims shook their heads in disbelief and grew impatient for him to finish.

Widespread concerns
Television and radio were banned from broadcasting his remarks as there had been widespread concerns prior to the trial that Breivik would use his testimony as a platform to spread his Islamophobic and anti-immigration ideology to the masses.

Breivik described his attacks as “the most spectacular operation conducted by a militant nationalist this century” and claimed that “rivers of blood caused by Muslims” are now flowing in European cities.

“Multiculturalism is a self-destructive ideology,” he said.

During questioning by prosecutor Inga Bejer Engh later, Breivik said he had toned down his address to spare the feelings of the survivors and victims of the families.

“I have never had any intention to act in an unacceptable way towards the [survivors and relatives] — I have no intention of adding to the[ir] burden,” he said.

“I can’t even comprehend the suffering I have caused,” he added.

He also explained why he had cried in court the previous day, when a 12-minute Islamophobic video he made and broadcast on the internet on the day of the attacks was screened in the courtroom.

“Because my country is in the process of dying — it was the sorrow over seeing my country … deconstructed,” he said.

Friendly tone
Breivik spoke in a calm and collected manner throughout the proceedings and was cooperative during questioning, which had a friendly tone.

The day’s proceedings were delayed for around 30 minutes at the start of the day after it emerged one of the five judges had posted a message on a website the day after the killings suggesting Breivik should be sentenced to death.

“The death penalty is the only fair outcome in this case,” Thomas Indreboe, one of the two lay judges on the panel, wrote on July 23 last year.

Following a submission from both the defence and prosecution teams, Indreboe was deemed unfit and replaced by one of two substitute judges, Anne Elisabeth Wisloeff, already present in court.

“The lay judge himself has acknowledged that he made these comments on July 23,” Arntzen told the court.

The death penalty does not exist in Norway.

If he is found sane, Breivik risks a 21-year jail term, which could then be extended indefinitely if he is still considered a threat to society. If he is found insane he could be sentenced to closed psychiatric care, possibly for life.

Two psychiatric evaluations have drawn contradictory conclusions on his sanity and ultimately it will be up to the judges to rule on them when they hand down the verdict sometime in mid-July.

Breivik has confessed to the attacks but has entered a plea of “not guilty”. — AFP

Nina Larson
Covering the United Nations agencies and other international organisations based in Geneva, as well as Swiss news for international readers. Producing news articles and features, translating and editing articles written by other correspondents in English and French, and shooting and editing video for AFPTV.
Facebook
Twitter
WhatsApp
Linkedin
Email
Telegram