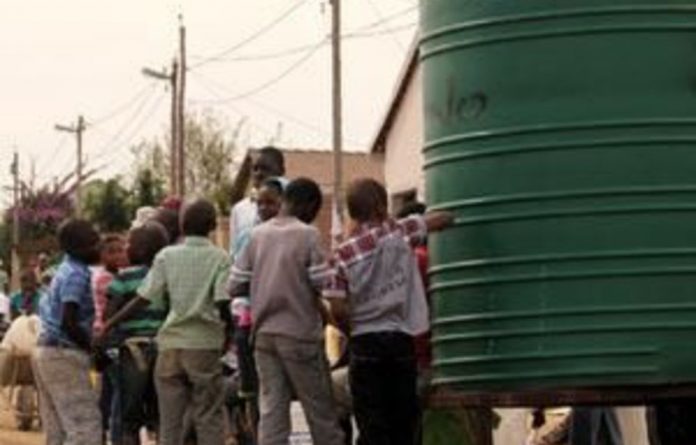 Diepsloot was at a standstill on Wednesday as a water crisis entered its sixth day, with no official word on when residents could drink from taps again.

The focus of life in the informal settlement, north of Johannesburg, is now water as men, women and children stand in long queues waiting for trucks to bring drinking water.

Problems began last Thursday when a contractor upgrading infrastructure accidentally broke a water pipe which was then contaminated with sewage, affecting the water supply to the whole area.

Communal taps were pouring clear water on Wednesday as Johannesburg Water flushed the pipes to ensure all signs of bacteria were gone.

“We were told by the police that there was poison in the water and we must not drink it,” said resident Johanna Matlhadisa.

“We are too scared to touch it, never mind to drink it,” she said.

Mpho Dumiso said she needed water to make mielie pap, the staple of her family.

“We are eating bread and drinking Coke but we want to cook now, my baby wants pap; really, we can’t go on like this.”

The price of life
Grade 11 Iterele High School pupil, Vinas Macefane, said she had not been to school this week because she couldn’t wash and her school clothes were dirty.

“We also don’t have anything to drink at school and we can’t flush the toilets.”

Mother of two Lucia Maswanganye said some of her neighbours were buying water from other communities, who were charging R15 for 25 litres.

“But I don’t have a job so I have no money to buy water,” she said.

Agnes Lehobye said she left home at 6am with her water buckets in a wheelbarrow on Monday.

“I found a water truck eventually and by the time I got home it was past 11am.”

Maureen Mamafha was one of the few lucky ones. Her husband has a car and a job in Centurion and has been filling water buckets every day at work.

“At least I don’t have to fight and wait in queues,” she said.

Feeding scheme
Mamafha has two small children and, she said, the school feeding scheme at her grade one daughter’s school had stopped this week.

“They can’t make food without water so I am sending my child with a lunchbox and some of the water that my husband brings.”

Many children were not going to school, she said.

In his yard he had three buckets lined up for the household’s water needs.

“We were moved from Alexandra township many years ago and the government promised us a house. We have filled in forms six or seven times and they keep putting stickers on our door for a house, but nothing happens. We want a house with electricity and, most importantly, a tap,” he said.

Across the road at Hlongwane’s Kitchen and Tavern the water cut-off has been devastating.

Closing shop
Every day, Petros Hlongwane makes pap and meat as a take-away. He sells about 20 plates a day for R20 each. Since the water cut-off he has not had water to cook and has been turning away customers.

On Monday and Tuesday he had to close shop.

“There is nobody else here, just me. When that water truck comes I must run because I need water for my business. It has been very hard and I am losing a lot of money.”

Even a live chicken seller was battling. He asked to remain anonymous but explained his chickens couldn’t be given contaminated water because locals would not buy them.

“I have to run for water for my chickens, otherwise they will die of thirst,” he said.

According to the 2001 census Diepsloot covers an area of 8.58 km² but has a population of 50 000. The majority of the community speak Sepedi or isiZulu. – Sapa