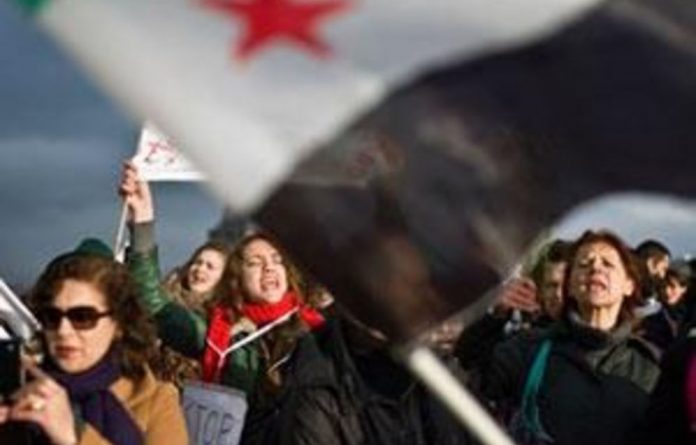 Syria challenged the UN chief over the size and scope of a UN truce monitoring mission on Wednesday, resisting a larger presence as its army shelled targets in the city of Homs in violation of the ceasefire.

Despite the seven-day-old truce agreement between government and rebel forces, explosions rocked the battered Khalidiyah quarter of Homs as the army resumed what has become a daily barrage of heavy mortar shelling and plumes of black smoke drifted over the rooftops.

In northern Idlib province, six members of the security forces were killed by a bomb placed by an “armed terrorist group”, state news agency SANA said. It was the second such attack in two days.

While the truce has held in some parts of Syria since President Bashar al-Assad pledged to enforce it last week, in strong opposition areas such as Homs, Hama, Idlib and Deraa, the army has kept up attacks on rebels, using heavy weapons in violation of the pledge by Damascus to pull back.

Syrian Foreign Minister Walid al-Moualem told a news conference in Beijing that no more than 250 truce monitors were needed, and they should come from what he called “neutral” countries such as Brazil, Russia, India, China and South Africa, all of which have been more sympathetic to Assad than the West and the Arab League states.

UN secretary general Ban Ki-moon was due to present proposals for the next phase of the mission on Wednesday to the Security Council. He says more monitors are needed for credible supervision of the truce in a country the size of Syria in the 13th month of a conflict marked by extreme violence and over 10 000 deaths.

An advance party of a half a dozen UN peacekeepers in blue berets, led by Colonel Ahmed Himmiche of Morocco, toured towns near Damascus on Wednesday in two white UN Land Cruisers with a Syrian police escort.

‘The butcher continues’
In Erbin their convoy was mobbed by anti-government protesters who chanted demands to arm the rebel Free Syrian Army. A banner was plastered on one UN car reading: “The butcher continues killings. The observers continue observing, and the people continue with their revolution. We only bow to God.”

With the flashpoint cities in Syria scattered over several hundred kilometres, Ban said he had asked the European Union if it can supply helicopters and planes to make the proposed monitoring mission rapidly and independently mobile, but Moualem said Syria would supply air transport if necessary.

A political source in neighbouring Lebanon said Damascus has already refused the use of UN helicopters.

The West has shown no desire to intervene militarily or push for the sort of robust peacekeeping mission that might require 50 000 troops or more. Russia and China, Syria’s powerful friends on the Security Council, have made clear they would block a UN mandate to use force. They are likely to back Damascus as the terms of the mission are thrashed out later this week.

Assad says Syria is under attack by foreign-backed terrorist and that for their own safety, the unarmed observers would have to coordinate every step of their operation with Syrian security to protect them from “armed gangs”.

The rebel Free Syrian Army fighting to topple Assad says it will stop shooting if he keeps his pledge to UN peace envoy Kofi Annan to withdraw tanks, heavy weapons and troops from urban areas, which critics say he clearly has not done since the truce took effect a week ago.

Apart from the shelling of targets in Homs, the city at the heart of the revolt, troops have swept towns and villages in raids to arrest suspected opponents of Assad. Activists say scores of people have been killed since the ceasefire officially came into force last Thursday.

Armed terrorist group
Syria’s official news agency SANA reported that four law enforcement members and a civilian were killed on Tuesday when “an armed terrorist group threw a bomb at a bus” in Aleppo, Syria’s second largest city after the capital, Damascus.

It said terrorists were attacking and killing loyalist troops in their homes and kidnapping judges.

Internet video showed what anti-Assad activists said was renewed shelling of Homs shortly after dawn on Wednesday. There were no immediate reports of casualties.

The Syrian Observatory for Human Rights, a UK-based group opposed to Assad, reported explosions and heavy gunfire in the southern city of Deraa early on Wednesday. It confirmed the five killed by a bomb in Aleppo.

Ban said on Tuesday that the ceasefire was being “generally observed”, though there was still violence. He said the 250 observers Assad will accept would be “not enough, considering the current situation and the vastness of the country”.

Annan delivered a status report to Arab League ministers, who called on Assad to let the UN observers do their job.

“We fully support Mr Annan and his six-point plan, but sadly, the killing still goes on,” Qatari Prime Minister Sheikh Hamad bin Jasim bin Jabr al-Thani told reporters after the meeting. “We are fearful that the regime is playing for time. We expressed this to Mr Annan.”

Syrian consent
Equipment for the mission, including vehicles, is already being transported to Syria via Beirut from a UN logistics base in Brindisi, Italy.

Diplomats say Annan’s main aim is to get a UN mission on the ground backed by Syria’s supporters Russia and China, even if it is not big enough at first to do the job.

The mission must have Syrian consent and Moualem said “this commitment does not cancel out the right to self-defence and appropriate response against any attack on government forces, infrastructure, civilians and private or state property”.

Qatar and Saudi Arabia say it is time to arm the Free Syrian Army with weapons to combat Syria’s powerful, Russian-armed forces, but other Arab League states say this would tip the crisis into all-out civil war, threatening the wider region.

Russia is also critical of Western and Arab states backing the Syrian opposition-in-exile in the “Friends of Syria” group.

France said it would host a foreign ministers meeting of the group on Thursday in Paris, including US Secretary of State Hillary Clinton, to discuss the fragile ceasefire.

Western sanctions have halved Syria’s foreign reserves and should be stepped up to force Damascus to comply with the UN-backed peace plan, France’s Foreign Minister Alain Juppe told officials from 57 countries meeting in Paris. — Reuters