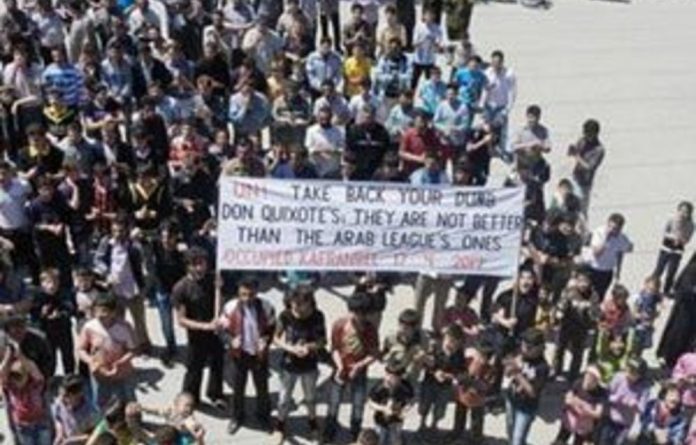 Jean-Marie Guehenno told the 15-nation council that deploying more unarmed military observers “would have a potential to change the political dynamics on the ground,” a diplomat said on condition of anonymity. Other envoys confirmed the remarks.

Syria and the UN signed a preliminary agreement on Thursday on the terms of a ceasefire monitoring mission but the deal skirted the vital issue of air assets, Edmond Mulet, deputy head of the UN Department of Peacekeeping Operations, told the council.

Mulet said that Syria and the world body have agreed to sort out the issue later, though he emphasised that use of aircraft “will be vital to the mission”, a diplomat said.

Syria has dismissed any need for UN aircraft, though diplomats and UN officials say the small mission will need UN planes and helicopters to monitor the ceasefire properly.

Monitoring team
UN secretary general Ban Ki-moon has also said that choppers and other military hardware would be necessary. He told reporters on Thursday that “this issue will be discussed more closely with Syrian authorities”.

“In view of the vastness of the country and in view of the very limited number of our monitoring team, we will have to have a very efficient and effective means of mobility,” Ban said.

He added that Syria’s UN Ambassador Bashar Ja’afari had reiterated the Syrian government’s determination to provide full support and cooperation to the observer mission, which Ban said in a letter to the council on Wednesday will be called the UN supervision mission in Syria, or UNSMIS.

In that letter, Ban said Syria has not fully complied with Annan’s six-point peace plan but outlined plans for an “initial deployment” of up to 300 observers to Syria for three months to supervise a fragile truce between forces loyal to President Bashar al-Assad and opposition fighters seeking to oust him.

Diplomats had said that Ban’s letter and Guehenno’s briefing would be crucial in determining whether conditions are right for deploying a larger monitoring mission to Syria, where Assad’s 13-month assault on pro-democracy demonstrators sparked an uprising that has brought the nation to the brink of civil war.

Full compliance
US and European diplomats on the council have suggested that Syria’s lack of full compliance with its obligations to end the violence might make them reluctant to approve a new resolution that would be needed to deploy an expanded mission.

However, envoys said it would be difficult to reject Annan’s request to quickly augment the advance team of a handful of UN observers who headed to Syria after the Security Council passed a resolution on Saturday authorising their deployment.

“There’s broad agreement among council members that we should be ready to authorise a full-fledged mission but real concerns [exist] about the conditions for its deployment being met, so that mission is on right track and doesn’t suffer a fate familiar from other missions,” a diplomat said.

An earlier Arab League monitoring mission ended in failure and the team pulled out of Syria.

“Also there’s clearly not a sustained cessation of violence as required under [Saturday’s] resolution, still tanks and heavy artillery deployed and violence up to pre-early-April surge levels,” the envoy said. “Hence, there’s much stress on the importance of moving ahead on all aspects of Annan plan.”

Annan’s peace plan calls for an end to fighting by government security forces and rebels, withdrawal of heavy weapons from towns, return of the army to barracks, humanitarian access and dialogue between the government and opposition aimed at a “political transition” for the country. — Reuters