Chelsea on the up after Barcelona stumble 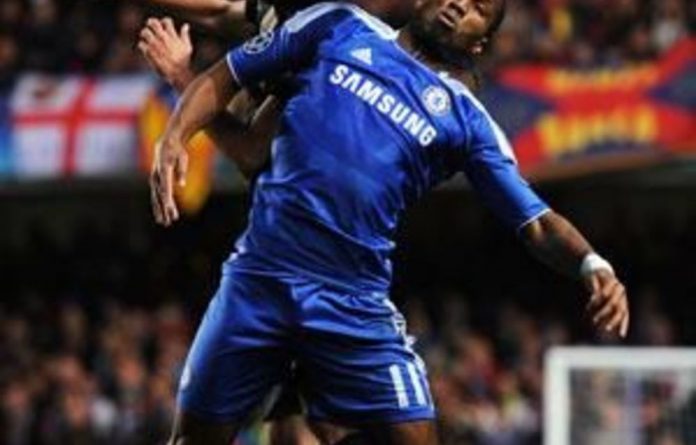 Didier Drogba scored the only goal as Chelsea stunned holders Barcelona to score a 1-0 upset victory in their Champions League semifinal first-leg match on Wednesday.

Drogba left Chelsea dreaming of advancing to their first final since 2008 in next week’s return leg at Camp Nou after pouncing on the stroke of halftime as Barcelona suffered their first European reverse of the season.

Drogba’s goal was Chelsea’s only attempt on target in a match where Barcelona carved out chance after chance, only to be denied by some desperate defending by their Premier League opponents.

“It’s a good result. Now we will go there and try and qualify,” said Drogba.

“I am happy to play these games. We have had difficult times, but now we are winning games.”

Skipper John Terry said the performance was one of Chelsea’s best in the tournament.

“We had to be very patient. They are a great side and we had to work hard in midfield,” said Terry. “Didier gave a tireless performance up front on his own. He works like a Trojan.”

“It was almost perfect. It’s a great result for us,” said the manager.

“When you play Barcelona you have to do a lot of defending and they have all the possession, you have to limit their threat and be clinical when you get your chances.”

Favourites
Barcelona coach Pep Guardiola meanwhile said the defeat had left Chelsea as favourites to advance to next month’s final in Munich.

“They are favourites,” Guardiola said. “They have a good result but at least we have the challenge to play 90 minutes more. And in that time we have the opportunity to create chances. But 1-0 is a very good result for them.”

Chelsea had taken the lead in first-half injury-time after an opening 45 minutes in which they had been comprehensively outplayed.

Frank Lampard released Ramires down the left flank with a superb cross-field pass and the Brazilian threaded his pass across the area to Drogba, who swept a low shot past scrambling Barca goalkeeper Victor Valdes.

Until then, Chelsea had been clinging on as Barcelona dominated for long periods with their customary slick passing game.

The Catalans might have taken the lead after only nine minutes when Andres Iniesta picked out Alexis Sanchez with a delightful chipped pass, only for the Chilean international’s lob over Petr Cech to hit the bar.

Relentless
Chelsea, who had opted for the muscular presence of Drogba in attack ahead of Fernando Torres, signalled their intentions early on, pumping a series of long balls forward for the Ivorian.

But genuine chances for Chelsea were few and far between while at the other end Cech was working overtime in the face of a relentless Barca.

Cech had to be alert on 18 minutes after Lionel Messi darted into the box and cut back for Iniesta, whose fierce low shot was well saved by the Chelsea custodian before Cesc Fabregas scuffed his follow-up wide.

Cech was pressed into action two minutes later, saving after Messi met a Sanchez cross with a downward header.

A goal seemed a certainty two minutes from the half-time when Messi won the ball in midfield and raced forwards menacingly.

The Argentinian threaded his pass through to Fabregas, who dinked his shot over the advancing Cech. The former Arsenal star’s effort just appeared to be spinning in but Ashley Cole was on hand to hook the ball clear.

Final twist
That appeared to be the final twist of the half until Drogba’s dramatic strike shot Chelsea into the lead two minutes into time added on.

Unsurprisingly, Chelsea’s goal was the cue for a sustained Barca onslaught after the break, yet the home side once again were able to frustrate the visitors despite their near-monopoly of possession.

Adriano was the first to test Chelsea again on 51 minutes, skipping over a challenge from Branislav Ivanovic and unleashing a venomous shot that Cech, diving at full stretch, parried to safety.

Moments later it was Messi’s turn, advancing forwards only for his shot to be well blocked by Terry.

On 57 minutes Barcelona threatened again when Fabregas lofted a sublime pass into the area for Sanchez, but a desperate covering tackle from Cole was enough to unbalance the Chilean, who shot wide.

Barcelona continued to dominate but with Chelsea defending deep and in numbers, they were unable to find a breakthrough.

They came close to an equaliser on 87 minutes but once again Cech came to the rescue. Messi whipped in a low free-kick and Carles Puyol stooped to glance a header goalwards, only for Cech to dive and turn behind for a corner.

In stoppage time Pedro struck the woodwork and then Sergio Busquets blazed over as Chelsea hung on for a famous win. — AFP