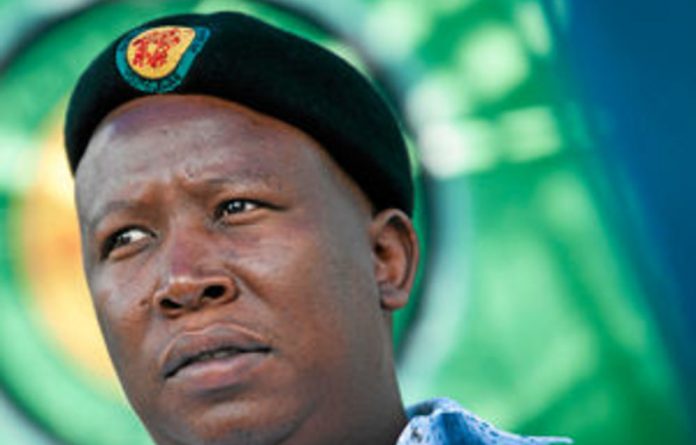 Embattled ANC Youth League president Julius Malema may be facing an uncertain political future at home, but youth bodies in other African states have rallied behind him in his bid to be elected as vice-president of the International Union of Socialist Youth in its conference.

Malema, who has been fighting for his political life following his expulsion from the youth league, has been nominated for the post by youth organisations, among others, Zimbabwe, Angola, Mozambique, Namibia and Zambia. Other countries that support him include Germany, Cuba, Russia, Sweden, Brazil and Venezuela.

Malema’s supporters believe it would afford him the platform to articulate his political views and lobby for youth development and job creation. They also believe Malema is the right man to “radicalise” the international body and “fight imperialism” globally.

The union is the biggest political youth organisation in the world and has about 150 member organisations in 100 countries. The position could give Malema a new media platform after the ANC barred him from speaking at any of its forums. Former youth league president Fikile Mbalula is one of its past presidents.

The Mail & Guardian has established that a high-level delegation of youth league national executive committee members, led by deputy president Ronald Lamola, has left for Paraguay where the three-day conference is taking place. It starts on Friday and voting is on Saturday. Malema will not be attending the conference because of commitments at home.

Although many of the African countries affiliated to the union want Malema to take over as president, his aides prefer the less taxing job of vice-president, which is currently occupied by former youth league secretary general Vuyiswa Tulelo. If the parties agree that Malema should take the vice-president position, he will be elected unopposed. The youth league has convinced Mozambique to shelve its ambition of nominating its own candidate as Africa’s preferred choice.

We are in solidarity with him and we respect the internal processes of the ANC. He is pushing a pro-poor agenda and let him push it right across the world, being guided by the manifesto [decided at the conference],” said Ncube.

Some want Malema to be based full time at the union headquarters in Vienna, Austria, for his own safety and to avoid political conflict at home. Despite this, his political allies believe he should continue to challenge the ANC’s decision to expel him, regardless of where he is based. Although the ANC’s national disciplinary committee of appeal, chaired by Cyril Ramaphosa, is likely to uphold the judgment by the national disciplinary committee, Malema can still petition the ANC’s national executive committee to review the verdict or the party’s all-powerful national conference to reverse the decision to expel him.

Ramaphosa this week rejected Malema’s appeal to have his temporary suspension overturned, stating that the decision was meant to prevent Malema from continuing his public attacks on the ANC leadership.

The appeals committee is expected to announce its decision in the next week or two.

Deputy president Ronald Lamola
Ronald Lamola is the obvious choice to replace Malema, should he be forced to step down.

The soft-spoken Lamola grew up in Bushbuckridge in Mpumalanga and never thought of politics as a career. The only connection he had with the outside world was a tiny Omega radio, which belonged to his father, a farmworker.

Although he was not particularly interested in listening to the news, his father would issue an instruction to family members to keep quiet during bulletins. This would later influence his interest in politics. “What dominated the news back then was the release of Nelson Mandela from jail and the Codesa negotiations. This became interesting to me,” Lamola said.

Lamola joined the youth league in 1996 at the age of 14. At Venda University he was elected president of the students’ representative council. Between 2004 and 2005 he became the provincial chair of the South African Students’ Congress.

He served as regional secretary of the Young Communist League’s Gert Sibanda region in Mpumalanga between 2008 and 2009, before he was elected a member of the league’s provincial executive committee.

Lamola was admitted as an attorney of the high court in 2007 and also served as spokesperson for Mpumalanga Premier David Mabuza.

He resigned as Mabuza’s spokesperson after he defied his instructions to support Gauteng youth league chairperson Lebogang Maile in his bid to replace Malema as president last year.

He holds radical views, but is widely respected among his peers for his consensus-seeking leadership style and level-headedness.

Treasurer general Pule Mabe
Given his seniority in the ANC Youth League, treasurer Pule Mabe is regarded by some as the best candidate to replace Julius Malema as the league’s president.

Mabe — a former Mail & Guardian journalist — is regarded as one of the league’s key strategists.

However, some youth league leaders close to Malema do not trust Mabe, considering him too ambitious after he was linked to a group that wanted the fiery leader ousted.

Mabe is credited with raising a record figure of more than R37-million for the league’s national conference at Gallagher Estate last year. He has also managed to build a successful media business. At the age of 31, he owns a company called KG media, which publishes Kwela Express, a monthly newspaper for the transport industry.

Two years ago, he established the Kedibone Mabe Trust, which funds students from his home town, Phalaborwa, to study journalism, marketing and engineering.

Abner Mosaase
Abner Mosaase is regarded as a neutral, independent thinker. He has kept a low profile in the league’s internal ructions and has not associated himself publicly with Malema or other factions.

Although not personally a Malema ally, he testified in his support during Malema’s appeal hearings early this year. He also gave an interview to the M&G in which he defended Malema’s remarks on Botswana in his capacity as head of the league’s international relations department, and released a controversial statement defending North Korean dictator Kim Jong-il after his death in December 2011.

Mosaase cut his political teeth in Soweto in the early 1990s when he joined the Congress of South African Students and the ANC’s youth wing following its relaunch in 1991. He was elected president of the student representative council for all campuses of the then Vista University. He also served as a Gauteng youth commissioner before being elected to the youth league’s national executive committee in 2008. In 2011, he was re-elected to the league’s NEC. — Michelle Pietersen & Matuma Letsoalo