Nzimande’s priority to be skills training 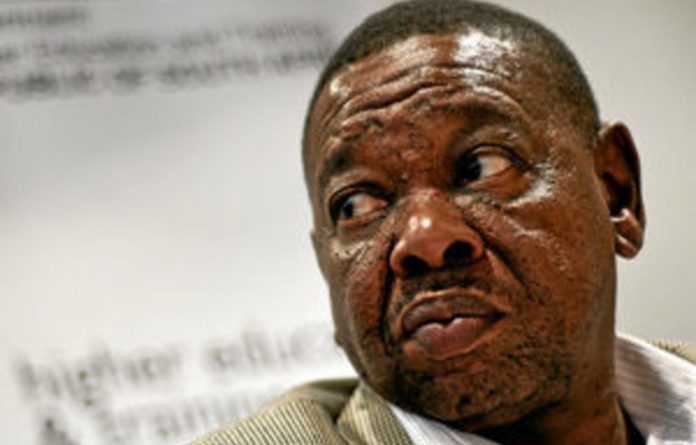 What can we expect when Higher Education and Training Minister Blade Nzimande delivers his budget vote in Parliament on Tuesday April 24?

Confidently enough, we can anticipate that he will stress skills, skills and more skills, because that was Finance Minister Pravin Gordhan’s overriding education and training priority when he delivered the national budget in February.

Gordhan was repeating, though much more briefly, what he told Parliament the preceding February and the flesh on those substantial skills bones has entailed huge amounts of financial and other attention to the 50 further education and training public colleges and the 21 skills education training authorities (Setas).

These are not the only reasons we know what Nzimande will stress on Tuesday. Most recently — this week — his department told the media what to expect.

Skills and financial help
In summary, seven bullet points the department provided broke down as four devoted to skills, colleges and Setas and three to universities, the latter being about assistance to students, mainly financial.

These are among the “key interventions [Nzimande] has successfully led [in] … the post-school education and training sector”, the department said. And of all these, the crowning “key” (it said) is the green paper the minister released in January that subsumes all seven bullet points.

But the crown subsumes, affects and influences much more than those seven bullets. We know, therefore, what Nzimande will stress, but not what he might choose to underplay or even omit altogether.

Reminding ourselves that there are nearly two weeks to go before the period for public comment on the green paper closes (on April 30), we might ponder the legitimate scope that anyone still has to contribute.

Human potential going to waste
The permitted boundaries are surely sketched here: “Approximately three million young people between the ages of 18 and 24 are not accommodated in either the education and training system or the labour market. This is an appalling waste of human potential and a potential source of serious social instability.”

These are the words and the scope of the green paper’s 100-odd pages. The document offers an unflinchingly steady thoroughness in identifying the multiple ways in which, as it admits, “post-school education and training is inadequate in quantity, diversity and … quality”.

An admirable thoroughness was one view this newspaper offered three months ago when Nzimande released the green paper, essentially a draft plan for the entire post-school terrain from now until 2030 (“Blade’s green paper cuts to the education core”, Mail & Guardian, January 13).

Other views have been expressed, some in the M&G, some published elsewhere and others we know nothing about yet.

Rightly so: they are still sitting with Nzimande, who invited them, and it is only after April 30 that he would need to start telling us what he thinks of them.

But would it be unreasonable to expect Nzimande to give us some better clues on Tuesday than his department’s seven bullet points provide? The question arises partly because the views we have seen published in various non-official vehicles since January 13 suggest that some are being silently pushed to the margins of the sayable.

Following Gordhan’s lead
As with many, the minister operates under the condition of being able to choose, but not always within conditions of his own making — one being his Cabinet colleague Gordhan’s financial dictates.

In particular, Nzimande also shares the life fact that to choose (to do or say) one thing tends to exclude doing, or at least prioritising, another.

All those most affected will have their own wish lists, or set of iron certainties (as each might see it), about what they want Nzimande to favour.

Many at universities, for instance, have a lot more to say about what they want from the green paper and about the state’s financial commitments already made and to come than they have yet made known beyond whispers to ivory walls (or to media).

For one timely grabbing of the opportunity to both listen and be heard, with universities particularly in focus, see “Green light for transformation”. The time remains, still, for all these and other voices to be heard.

Green light for transformation
With a special focus on universities, the special adviser to Minister of Higher Education and Training Blade Nzimande will speak about the green paper on post-school education and training on Monday April 23, the University of Johannesburg announced recently.

“Implications and Possibilities for Universities” is the theme of the event at the university, which adviser John Pampallis will address.

“The green paper provides a succinct analysis of the main pillars of the post-school system: higher education, further education and training, skills development and adult education,” the university said when it announced the event.

“The green paper proposes the creation of a policy framework [to] bring about greater coherence, articulation and integration of the sub-sectors of post-schooling with emphasis placed on … (a) addressing inequalities and the poor quality of education; (b) expanding access to education; (c) responding to high unemployment; and (d) addressing development and transformational goals.

“The green paper defines universities as crucial to knowledge production through research that enhances the economic, social and cultural life of all citizens.”

The event is 2pm to 5pm on April 23 at the school of tourism and hospitality, Bunting Road campus, Auckland Park, Johannesburg. For more details, contact Petro van Rooyen at [email protected]. — David Macfarlane

Morocco’s occupation of Western Sahara is about the presence of resources, especially phosphates that make up 72% of the world’s reserves. Phosphate is used in fertiliser, a key element in agriculture, giving Morocco a tight grip over world food production.
Advertising