The fracking intrusion of a sacred space 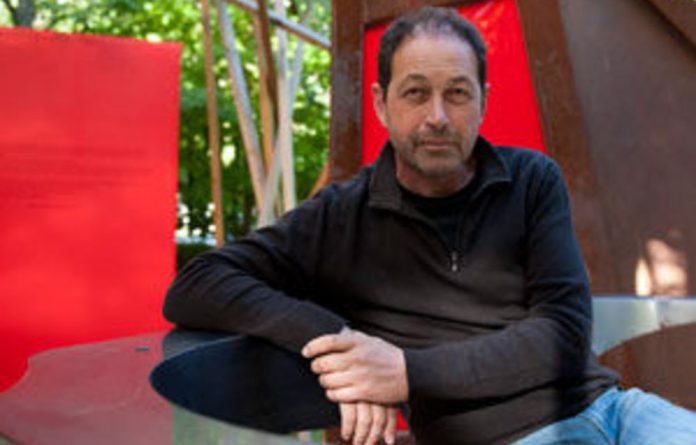 Internationally acclaimed land artist Strijdom van der Merwe’s favourite place on Earth has made an imprint on his gentle face. He spends a lot of time alone in the Karoo with its bright light, wind, dust and desolation. He loves that vast part of South Africa, which he often uses as a canvas for his unique land art — and when Van der Merwe talks about the Karoo it makes him smile, showing laugh lines that look like the furrows he makes by dragging his heel on its sandy surfaces.

“For me, the Karoo is sacred. Because it is dead quiet, you become relaxed, destressed in its laid-back tempo, and you have to live with that,” he says during a meal at Casparus Restaurant in his home town of Stellenbosch. He designed the restaurant for renowned chef Etienne Bonthuys.

Like other land artists, Van der Merwe’s gallery is the environment and, as Annali Cabano-Dempsey wrote in the prologue of his beautiful book, Sculpting the Earth, he has an “immense capability” to “capture profound moments in time and space and then to let it go — the only memory of its existence captured by the lens of a camera”.

As a full-time land artist for the past 16 years who has exhibited around the world, the thoughtful Van der Merwe’s “canvas” of choice remains the Karoo. “I enjoy it tremendously to work in the Karoo, but it is also much more difficult and that is why it is so enjoyable —

“It is like having a white canvas, but you’re allowed to only draw one line and where you draw that line and how you draw it will determine if it is a success or not. But, say, in the Knysna woods, there are so many other things that your one line will disappear in the 110 000 other trees and ferns.”

Subtle protest
Van der Merwe’s art has always been largely understated, even though it often draws attention to environmental issues such as global warming. That was until the threat of fracking in his beloved Karoo, where powerful energy multinational Shell wants to mine for shale gas in this unscathed part of South Africa.

Van der Merwe (50), who grew up on a Highveld farm, says he has never thought of himself “as an artist with a protest voice. I try and do things in a subtle way; somewhere deep down a message filters through. I guess it has to do with my personality — the fewer things I have the happier I am, the less I bother others, the better I feel, the smaller my footprint on Earth, the gladder I am. I am not a guy who wants to trumpet things.

“[The prospect of fracking] was a shock to me, because I enjoy the Karoo landscape so much … to think that this mining process can start to poison the earth and the underground water.”

A large installation in Van der Merwe’s current solo exhibition at Circa in Johannesburg, Imagine the Unthinkable, is immensely angry without him waving placards or shouting at the top of his voice.

“The documentaries I have seen about fracking in America, for example, show that not a lot seems to happen on the surface, but there has to be a drilling process. What I tried to show with the installation is that there will be this station that will be so non-Karoo, which will all of a sudden appear, and that there will be this motion, these sounds, which are not Karoo, not indigenous, and that the sound is so alien that I wanted it to be irritating.”

The installation occupies an entire floor and is scattered with 20 small mousetrap-like contraptions, each 30cm long, 12cm wide and 12cm high, with what look like small drumsticks that keep banging irregularly from different parts of the large floor space. Each of these little machines is placed on maps of the area in the Karoo where the fracking could happen.

“I wondered whether it had to be ping-pong xylophone sounds or rather that cold sound — so I decided that it rather had to be the cold sound.

“So I created something of you standing there thinking, ‘it is this machine that has to knock, but it is actually one over there’, so you try and think ‘where next?’ and you don’t know. So you lose yourself in this landscape of alien things.

“What worked for me is that it is so flat in the gallery, with the big sky above like the Karoo, and you walk through the landscape. So what I think I achieved well — to flatter myself — was to illustrate the vastness of the Karoo in this space.”

Van der Merwe says the Circa exhibition has put him back about R30 000, “but I had such a need to do it that it isn’t an issue for me”.

He thinks a bit when asked what he wants to achieve with his land art. Then that Karoo smile with a chuckle: “Self-indulgence.” Seriously, though? “In the first place I don’t make it to impress anyone else — I guess it is a bit self-indulgent. You make it, first, because it is fantastically enjoyable, but then there are people who get joy out of it. Then there are issues when you have the opportunity to contribute and make your voice heard, like this fracking in the Karoo.

“Years ago I did something about District Six [from where black people were forcibly removed]. I put up a range of post boxes saying ‘D6 poste restante’, with the idea that we can still send letters to you who lived there — it is still your address and basis even though you’ve been forcibly removed.”

He says there is also that sense of creativity that one feels within, “so if you are a good artist you create something that didn’t exist before”.

Art for art’s sake
For a land artist, an exhibition is not necessarily a way to make money.

“Nothing has been sold on the exhibition yet. An exhibition like the one at Circa has always been an advertisement for people who then commission me for more stuff.

“After the opening, I got a call from architects who have to transform a large piece of land into a heritage park. They want the ground works to be formed into land-art shapes. It’s a massive job — they’re talking about 500 statues that represent the apartheid era — but the money isn’t there yet; it is a concept at the moment.”

The Smithsonian Africa Museum wants Van der Merwe to do an installation for Earth Day on April 22 next year. “The piece of land that they gave me to work with is 100m long and three metres wide — it is a long strip of lawn. I looked at the lawn and I thought to myself that the grass is actually artificial because it is a planted piece of lawn, but underneath the grass is the real earth. So I thought: ‘Isn’t this like Africa — on top the colonialist, but underneath the old Africa, the old cultures?’

“So, in my imagination the Europeans took the maps and stuck pins with red heads on the maps, so I am going to take 5m tall ‘pins’ every few metres, pushing back the grass like a crumpled-up serviette, making the grass look like waves and, underneath the grass, exposing the real Africa.”

Making money for this former art lecturer, now full-time artist, is a small part of his art. “I’ve always subscribed to the Japanese aesthetic of wabi-sabi — you collect knowledge in your head and carry that with you rather than earthly belongings, because they eventually become a burden. I’ve become a person who has attached much more value to the moment.”

Some people may say that land art cannot be too difficult. “They won’t say it but they may well think it …”

“So afterwards I told the local artists it isn’t like you put 10 rocks in a line, or put yellow leaves in a stack, but where you pack it or how you pack has to do with your knowledge of colour, how you use textures and perspective.

Strijdom van der Merwe’s Imagine the Unthinkable is on at the Circa Gallery in Rosebank, Johannesburg until May 12