Protesters and police clash ahead of F1 Grand Prix 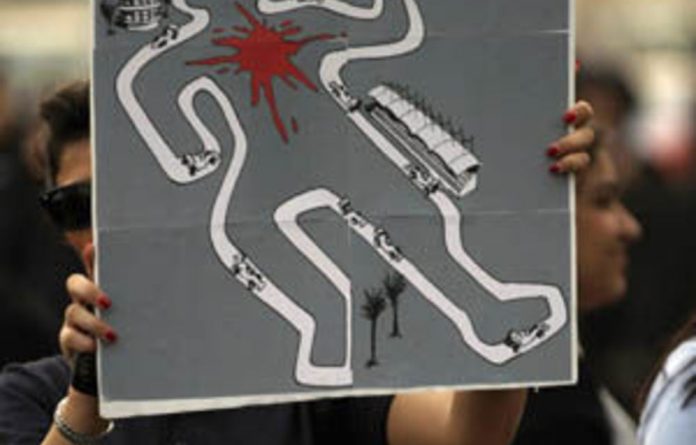 Dozens of protesters clashed with police across Shiite villages close to the circuit where Bahrain’s controversial Formula One Grand Prix takes place this weekend, witnesses said on Saturday.

Dozens of people took to the streets late Friday and set alight tyres near the villages of Damistan, Karzakkan, Malkiya and Sadad, all less than 4km from the Sakhir circuit.

“Down with Hamad,” they chanted, referring to Bahrain’s king, along with other slogans in support of jailed Shiite activist Abdulhadi al-Khawaja, who has been on a hunger strike for two months.

Some of the protesters, who included women, wore face masks and several were dressed in white shrouds bearing the message: “I am the next martyr.”

Security forces fired tear gas and sound bombs to disperse the demonstrators, some of whom responded by hurling petrol bombs and stones, witnesses said, adding that the clashes were “violent.”

“Three days of rage”
No casualties were reported, however.

The clashes followed a massive afternoon demonstration in the Shiite suburb of Budaya, west of Manama.

Shiite-led protests have intensified in Bahrain, site of a month-long uprising that was crushed last year, since its Sunni rulers insisted on going ahead with this weekend’s Formula One Grand Prix race despite pressure to call it off.

The February 14 Youth Movement has called on social networking sites for “three days of rage” to coincide with the race.

Bahrain’s main opposition group, Al-Wefaq, had called for a week of daily protests during the Grand Prix to focus media attention on their long-standing demands for reforms.

No cancelling
But on Friday, when F1 teams took to the track for the first free practice sessions, Crown Prince Salman bin Hamad Al-Khalifa ruled out cancelling the event.

“I think cancelling just empowers extremists,”said during a media briefing at the Sakhir circuit.

“I think for those of us who are trying to navigate a way out of this political problem, having the race allows us to build bridges across communities, and get people working together.”

The Bahrain event was cancelled last year in the wake of and uprising and the government crackdown that followed in which a government commission said 35 people were killed.

Following Friday’s free practice sessions, the Bahrain GP gets underway on Saturday with qualifying for grid positions followed by the actual race on Sunday. — Sapa-AFP