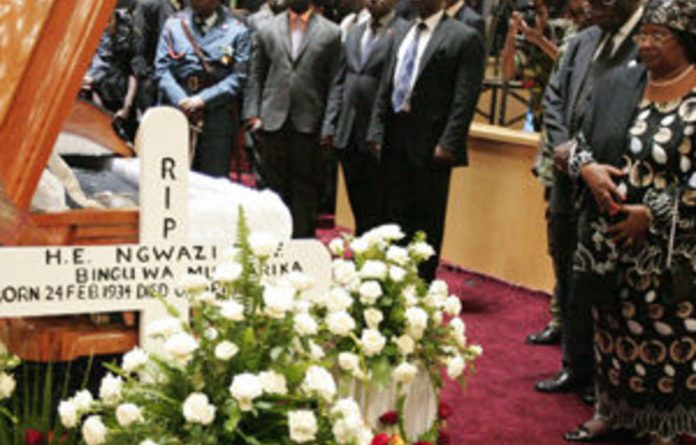 “He was not an angel, he made mistakes, so let us not remember the bad things, let us remember about the positive things about Bingu,” she said, to murmurs of approval from the mourners.

Several African heads of state and thousands of locals attended the burial for Mutharika, born Ryson Thom in 1934, on his farm in southern Thyolo where his casket was draped in the Malawian flag.

A 21 gun salute boomed as his body was carried into the family mausoleum after travelling on a two-gun artillery, with motorcycle outriders, from his farm mansion to the white marble edifice where a funeral mass was held.

African leaders attending the burial praised Malawi for its smooth transition of power, after a two-day delay in announcing his April 5 fatal heart attack prompted fears that Banda would be denied office.

“We congratulate you for the orderly and smooth transition which helped to entrench and cement the rule of law,” Mozambican President Armando Guebeza told mourners who also included presidents from Namibia, Kenya, Tanzania and Zimbabwe.

The Mozambican praised the late leader as one of the “greatest sons of Africa who had a distinguished career as a fully-fledged international economist” working for the World Bank, the United Nations and regional bloc Common Market for Eastern and Southern Africa (Comesa).

In a reconciatory tone, Banda told Malawians “to remember the good things about the late president”, despite being sacked from his ruling party two years ago and becoming one of his fiercest critics.

Mutharika’s brother Peter, who has already been named by his party as their presidential candidate for polls in 2014, praised his sibling as an “extremely wonderful human being and great man”.

“Although he made mistakes of judgement, he made them not out of evil,” he told the crowd which included supporters wearing slogans such as “100% Bingu” and “Bingu … rest in peace”.

Mutharika had come in for heavy criticism in the weeks before his death, accused of pursuing policies that have resulted in an economic meltdown and suspension of aid by donors. — AFP