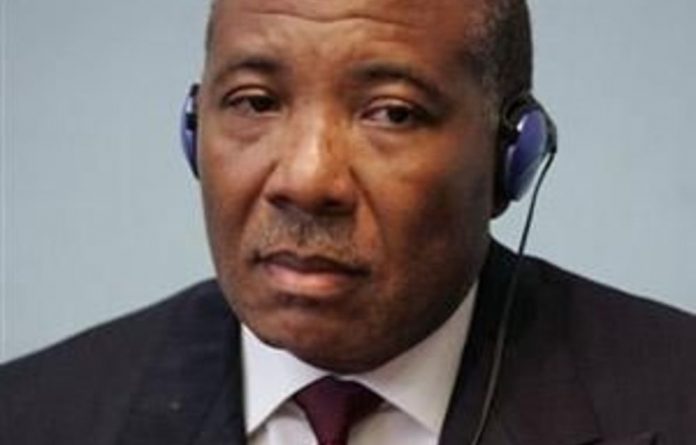 Liberian former leader Charles Taylor awaits a verdict on Thursday on charges of arming Sierra Leone’s rebels in return for “blood diamonds” in the 1990s.

A three-judge bench will read the historic decision — the first verdict against a former head of state by an international court — at 11am at the special court for Sierra Leone in Leidschendam outside The Hague.

Taylor (64) is accused of helping Sierra Leone’s Revolutionary United Front (RUF) rebels wage a terror campaign during a civil war that claimed 120 000 lives between 1991 and 2001.

The trial, which saw model Naomi Campbell testify she had received diamonds from the flamboyant Taylor, wrapped up in March 2011.

“He [Taylor] was really key in people’s minds as to who was accountable for what happened,” Elise Keppler, who monitored the trial for Human Rights Watch, told AFP this week.

She added: “He is a former head of state, the first to hear a judgment against himself: it is unprecedented, it is a historic moment.”

During the trial, prosecutor Brenda Hollis told the court: “Charles Taylor created, armed, supported and controlled the RUF in a 10-year campaign of terror against the civil population of Sierra Leone.”

As president of neighbouring Liberia, he acted as “chief, father and godfather to his proxy rebel forces in Sierra Leone,” prosecutors added, saying the RUF was a “terrorist army created, supported and directed by Taylor”.

The former warlord has pleaded not guilty, dismissing the allegations as “lies” and claiming to be the victim of a plot by “powerful countries.

The rebels, often high on drugs, murdered, raped and maimed their victims, notably amputating hands and arms with machetes.

SCSL spokesperson Solomon Moriba told AFP that if Taylor is convicted his sentencing will take place four to six weeks later, but Moriba declined to say how many years behind bars he might face, saying only that the judges would decide “based on the severity of the crimes”.

The court, set up jointly by the Sierra Leone government and the United Nations, has already convicted eight Sierra Leoneans of war crimes and jailed them for between 15 and 52 years after trials in the west African country’s capital Freetown, Moriba noted.

During Taylor’s three-and-a-half-year trial here, some 94 witnesses took the stand for the prosecution and 21 for the defence. Taylor himself testified for 81 hours.

British supermodel Naomi Campbell and actress Mia Farrow gave headline-grabbing evidence in August 2010 about a gift of “dirty” diamonds Taylor gave to Campbell at a charity dinner hosted by then South African president Nelson Mandela in 1997.

Judges heard gruesome testimony from victims of the Sierra Leone conflict, including a witness who said he pleaded with RUF rebels to cut off his remaining hand so they would spare his toddler son.

Others said Taylor’s fighters strung human intestines across roads, removed foetuses from women’s wombs and practised cannibalism, while children younger than 15 were enlisted to fight.

One witness said he was present when the Liberian leader ate human liver.

During his own testimony, which began in July 2009, Taylor called the trial a “sham” and denied allegations he ever ate human flesh.

He did however say he saw no problem with the fact that human skulls were being displayed at military checkpoints in Sierra Leone.

Nigerian authorities arrested Taylor in March 2006 when he tried to flee from exile in Nigeria after stepping down as Liberian president three years earlier in a negotiated end to a civil war in his own country.

He was transferred to the SCSL in Freetown, but in June 2006 a UN Security Council resolution cleared the way for him to be transferred to The Hague, saying his presence in west Africa was an “impediment to stability and a threat to the peace”. — AFP