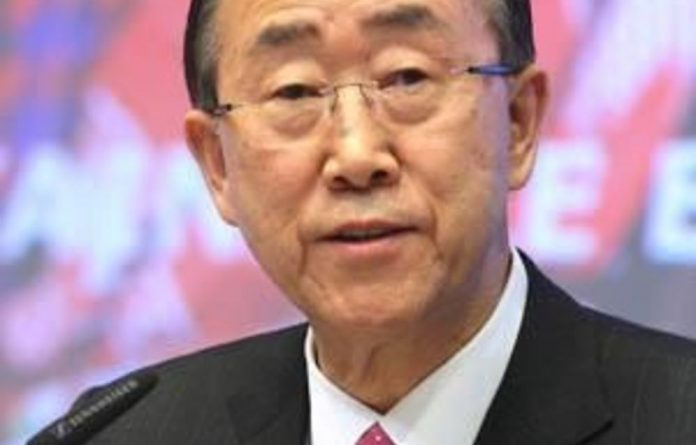 UN secretary general Ban Ki-moon said on Monday that the deployment of 300 ceasefire monitors to Syria could begin next week despite the belief that the crisis had hit a “pivotal” moment.

Ban insisted that President Bashar al-Assad’s regime protect the unarmed observers and allow them to travel freely throughout the country.

“It is absolutely important that the Syrian government should provide full protection of our monitors and ensure their freedom of access, freedom of movement,” Ban told reporters.

He said Assad must ensure “cooperation from the Syrian government, including air assets mobility,” such as airplanes and helicopter, adding he had conveyed that message to Syria’s UN envoy Bashar Jaafari last week.

Ban added that he hoped Damascus would “fully cooperate” with UN and Arab League envoy Kofi Annan, who devised a six-point peace plan aimed at ending the violence in Syria, where thousands have been killed in the past year.

“But it is our hope that the deployment of observers will help to stop the killing and consolidate the calm,” UN under-secretary General Lynn Pascoe said.

“We are at a pivotal moment in Syria.”

A UN Security Council resolution passed on Saturday gave Ban the duty to make an “assessment” on whether it was safe for the full team of unarmed monitors to go.

“The decision has been taken” and the monitors will arrive in “phases” starting next week, deputy UN spokesperson Eduardo del Buey said.

Record of deception
The deployment of an advance party of 30 observers “is expected to be completed by the end of April and the expeditious deployment of the rest of the military observers is a priority,” he added.

The UN supervision mission in Syria will go for an initial 90 days but the US has already warned that it may not allow extension of the mandate.

The Security Council decided to approve the full UN Staff Mutual Insurance Society (UNSMIS) force even though Assad has not withdrawn troops and heavy weapons from Syrian cities in line with the peace plan agreed with Annan.

“The regime’s long track record is one of dependable deceit and deception, thus this Syrian mission is unusually risky and dangerous,” US Ambassador Susan Rice told the Security Council.

The US, Britain and France have all said they will call for sanctions against Assad if the observer mission fails.

“Conditions are risky but we believe the presence of UN observers will change the political dynamics on the ground,” Annan spokesperson Ahmad Fawzi said of the decision to start sending the monitors.

Annan has made repeated calls for the Syrian government to pull back troops and heavy weapons in line with the peace plan so that political talks can start.

But Pascoe told the Security Council that Syria’s action on other points were also lacking.

“Measures taken by the Syrian authorities to date, including on the release of arbitrarily detained persons and the respect of the right to demonstrate peacefully, are clearly insufficient.”

Annan is due to brief the Security Council for the third time at 7pm on Tuesday on his efforts to mediate in the Syrian crisis. He will speak to the closed meeting by video conference, diplomats said.

The UN Security Council voted on a resolution on April 14 to let the first 30 monitors go to Syria, where the UN says more than 9 000 people have been killed since an uprising against Assad started in March last year. A second resolution passed on Saturday increased the number of unarmed monitors to 300. — Sapa-AFP