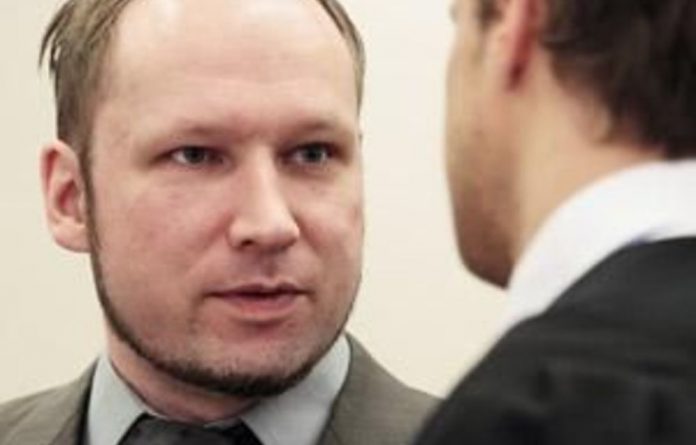 After testifying for five days, Anders Behring Breivik listened silently as others described the mayhem caused by his bombing of Oslo’s government district, a scene one witness described as a “war zone”.

Forensic experts explained the massive injuries to four of the eight victims killed by the 950kg fertiliser bomb on July 22. Breivik admitted to the bombing and a subsequent shooting massacre at a Labour Party youth camp that left 69 people dead, most of them teenagers.

“More than 100 body parts were found in the government district,” said Ole Morten Stoerseth, a police official tasked with identifying the blast victims.

Relatives of those killed sobbed and embraced during the autopsy presentations. Pictures of the victims’ injuries were not shown in court but distributed to the judges, prosecutors and defence lawyers as well as the psychiatrists who are examining Breivik during the trial.

Breivik claims the attacks were “necessary” and that the victims had betrayed Norway by embracing immigration.

As he has for most of the trial, the far-right fanatic remained mostly expressionless during the hearing on Tuesday. But he smiled when a security guard, who was inside the government high-rise when the bomb exploded, called Breivik’s motive for the attacks “totally absurd”.

‘Shooting in Utoya’
Describing the confusion that followed the blast, police operations leader Thor Langli said the initial reports he received suggested there were two suspects and two other bombs about to explode.

Langli recalled standing next to the head of an anti-terror squad in Oslo when he received a call about the second attack at the Labour Party’s youth camp on Utoya Island, some 40km from the Norwegian capital.

“I saw on his face that it was something serious,” Langli said. “And while I was watching him he said out of the corner of his mouth, ‘Shooting on Utoya’.”

The self-described militant nationalist testified last week that he had expected to be shot by police after the bombing. But no one stopped him as he walked to a getaway car parked near the bomb site, and he drove to Utoya.

“I estimated the chances of survival as less than 5%,” Breivik said last Thursday.

Langli said he first got a report of a suspect with a “non-Nordic” appearance leaving the scene of the bombing. He then got another report of a Nordic-looking suspect, which made him believe there were two suspects.

Same person
When he heard about the Utoya shooting, he started thinking the bomb and the massacre were the actions of the same person.

“I thought there was a connection. But I didn’t have any evidence for that,” Langli said. Turning to Breivik, he added: “I could not imagine there being two people with so many crazy ideas.”

Two examinations conducted before the trial reached opposite conclusions on whether Breivik is psychotic, the key issue to be resolved during the trial.

A security guard who was in the basement of the Norwegian government high-rise struck by the car bomb testified Tuesday that he and a colleague used security cameras to get a closer look at the white van that Breivik had parked in front of the building.

“The moment we had zoomed in on the plate the car exploded,” said Tor Inge Kristoffersen, who was not hurt in the bombing. He described the scene in downtown Oslo as a “war zone”.

Svein Olav Christensen, an explosives expert working for a defence agency, showed pictures of the bomb site to the court. The 950kg fertiliser and diesel bomb had ripped holes in the concrete platform underneath the vehicle, and also in the subterranean floor below.

Breivik has said he was disappointed when he found out that the 17-story building had not collapsed. Christensen said the bomb would have had to be “much larger” to bring down the structure.

The trial is scheduled to go on for nine more weeks. — Sapa-AP