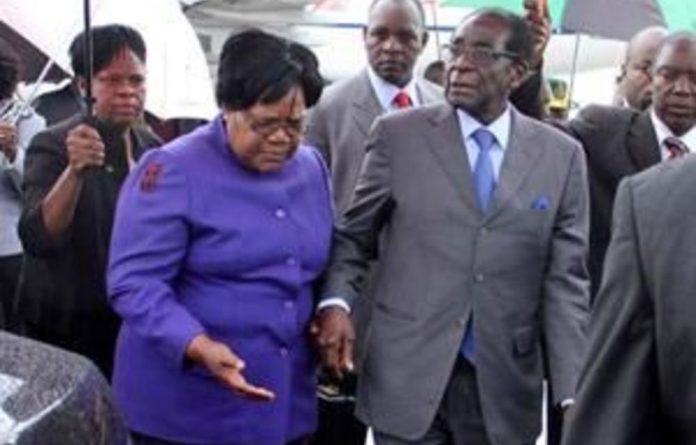 If anyone wanted a lesson in how Robert Mugabe continues to wield power over his party, it is how he handled the aftermath of the latest bout of speculation over his health.

Over the past week, the two pretenders to his throne have been pressured into taking the unusual step of denying their ambitions and publicly worshipping at Mugabe’s feet.

Vice-President Joice Mujuru declared that Mugabe was “a gift to the nation” and her rumoured rival, Defence Minister Emmerson Mnangagwa, said those who claimed he had made a secret deal to replace Mugabe were “mentally deranged”.

It is classic Mugabe: force ambitious lieutenants to declare their allegiance publicly and whip all other ambitions back into line behind him.

The rival faction leaders appear to have come under pressure from hardliner Mugabe loyalists who are angered by reports that the two factions are making new moves to nudge Mugabe off the stage.
Mnangagwa, who seldom speaks about his rumoured ambitions, used a public lecture at a university to deny he had reached a “pact” with Mugabe to take over power.

“There is no such thing and these are the efforts of detractors bent on causing alarm and chaos among the authorities, both in Zanu-PF and the government,” he said. “There is really nothing to it. It’s just wishful thinking from our enemies. The fortunate thing is that we are too mature to be distracted by such mentally deranged people.”

Once Mnangagwa had issued his denials, Mujuru had to follow suit. At the weekend, she described Mugabe as “a gift to the nation” and said that talking about his replacement would be a betrayal of a leader she had known for 37 years. “I will never seek to occupy his seat as long as he remains in office. We would never betray the leadership. We were groomed well by the party,” she said.
Speculation about the factional fighting between the two groups said to be vying for power has been a feature of newspaper columns for years.

But the talk has increased over recent weeks and is beginning to eat away at Mugabe’s traditionally strong grassroots support.

Jonathan Moyo, a politburo member and avid Mugabe loyalist, said factionalism in the party had reached “shocking levels”. What made it worse, he said, was that the “factionalism which has taken root within our nationalist movement is content-free in ideological and policy terms”.

Zanu-PF officials say a serious worry for the party is the growing signs that the question of Mugabe’s succession is tearing apart its grassroots structures, which loyalists have been mobilising to rustle up support for a new election.

Zanu-PF spokesperson Rugare Gumbo said infighting had disrupted district elections in three provinces. Mugabe has blamed divisions on Zanu-PF’s 2008 electoral loss, but Gumbo insisted the party would pull together in time to face the opposition once elections were called.

Mugabe, in a speech to mark independence, spoke against violence caused by “sitting members of Parliament and potential candidates” but said this was not only happening in his own party.

Mujuru had been the only one to ask Mugabe when he intended to retire, Ndlovu was quoted as telling a former US ambassador. He reportedly said that Mujuru had become “independently wealthy, which [gave] him a freedom for manoeuvre that those whose livelihoods depend on ruling party beneficence do not have”.