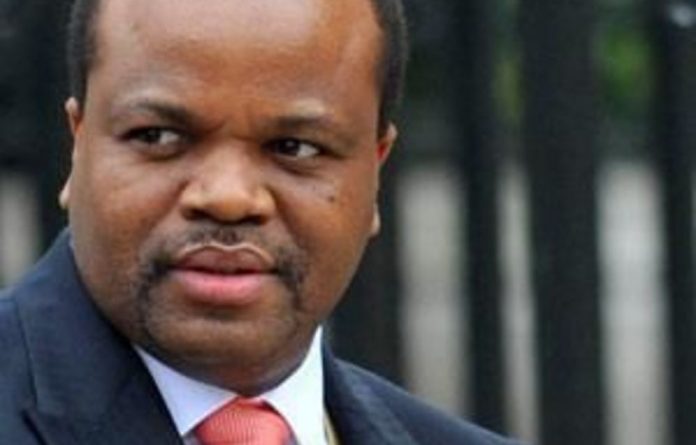 Democracy activists have reacted angrily to the Swaziland government’s announcement that unnamed “development partners” have given King Mswati III a private jet for his 44th birthday, asking how the donation of an aircraft could assist development in the poverty-stricken ­kingdom.

Announcing the gift of the DC-9 aircraft at a press conference in the capital, Mbabane, on Tuesday, Swaziland Prime Minister Barnabas Dlamini said the “development partners have asked to remain anonymous”.

According to one set of rumours, the “partners” are the Indian-based company Salgaocar Engineers, which is engaged in a massive exercise to export iron ore from Swaziland’s Ngwenya mine.

Salgaocar’s chief executive, Sivarama Petla, is close to Mswati and receives a police escort when he visits the kingdom.

However, others believe the donation claim is a smokescreen and that the government purchased the aircraft.

Wednesday was a public holiday in Swaziland and neither the government nor Salgaocar Swaziland could be contacted.

Attempts to obtain comment from Salgaocar’s headquarters in Goa, India, were unsuccessful.

A spokesperson for pro-democracy organisation Swazi Diaspora, Ntombenhle Khathwane, labelled the announcement “a blatant lie”, saying it would be ridiculous for a development partner to make a donation and then hide its identity.

“It would be good for the donor’s image if it is making a meaningful contribution,” said Khathwane.

“But in any case, why would anyone make a donation of a plane as part of a development agenda?”

Khathwane said Swazi Diaspora had heard that the government had started recruiting pilots for the aircraft about three months ago.

To wait until the king’s birthday and present it as a gift was intended to deceive Swazis, she said.

The deputy president of the Trade Union Congress of Swaziland, Sibongile Mazibuko, said Swazis had to be informed about the source of the “gift”.

“In our culture the king is king because of his people. So this plane belongs to us and we deserve to know,” she said.

The DC-9 is a full-fledged airliner, seating between 90 and 135 passengers.

Aviation expert Linden Birns, managing director of the consultancy Plane Talking, said production of the aircraft had ceased in the early 1980s and a standard DC-9 was now unlikely to cost more than $2-million.

But Birns added that, because it used old technology, it was expensive to fly.

Maintenance was also more costly than for modern aircraft.

Dlamini said the aircraft was for the private use of Mswati and the queen mother when they travelled around the world “seeking help for the Swazi people”.

However, Mazibuko said the king’s international travel did not benefit the country and that its socio­economic plight was worsening.

“Most of our children are not getting scholarships, there is an inadequate supply of drugs at public hospitals and ever-increasing unemployment,” she said.

Earlier attempts by Mswati to buy a private jet were reversed by Parliament in 2002 after the government had already paid a deposit of R28-million on an aircraft to Canada’s Bombardier Aerospace.