Zuma: Our people are better off today than in 1994 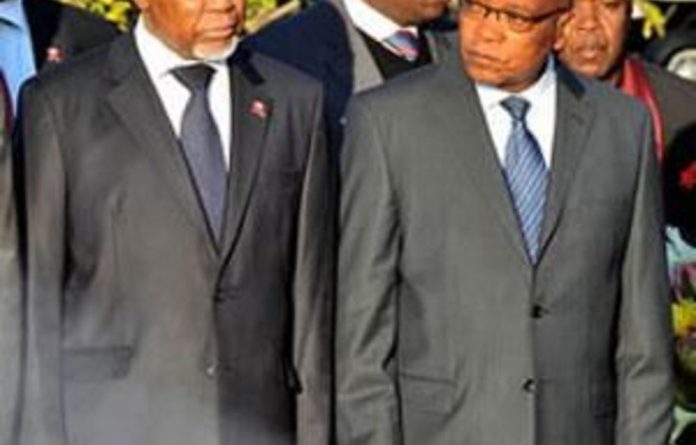 South Africa has made significant strides since democracy in improving access to basic services, President Jacob Zuma said at a Freedom Day celebration in Pretoria on Friday.

“In this regard we are leading the struggle to eradicate unemployment, inequality and poverty through promoting inclusive economic growth,” he said.

“A lot has been achieved in the extension of basic services since 1994, in turning South Africa around but much more still needs to be done.”

He said the country’s fourth democratic administration’s main challenge was to ensure that more people would benefit from economic growth while building on the strength of the same economy.

“In 1994, we knew that our toughest task was to transform the economy to [make it] reflect the change to democratic governance,” he said.

‘Still recovering’
“The international economic downturn in 2008 was a major setback especially on the employment [creation] front. We are still recovering from that downturn.”

He said government still had a lot to do regarding land restitution and re-distribution.

Zuma also announced that his administration would grant a special remission of sentence to specific categories of sentenced offenders, probationers and parolees.

Remission of sentences
The programme would exclude inmates sentenced for aggressive sexual, firearm and drug-related offences. The remission would also not apply to inmates who had been declared dangerous criminals.

Previous remission of sentences had been granted in the past to coincide with key national days.

Thousands of people gathered at the Union Building since early on Friday to mark the country’s 18 years of democracy.

Malawi’s new president Joyce Banda arrived at the venue to join Zuma for the celebration.

Accompanied by her husband and other delegates, Banda is on her first official visit to South Africa following her recent inauguration this month.

She rose to the highest office in Malawi after the death of President Bingu wa Mutharika, who was buried last week.

During her visit, Zuma and Banda were expected to exchange views on issues of mutual interest and common concern, the International Relations department said.