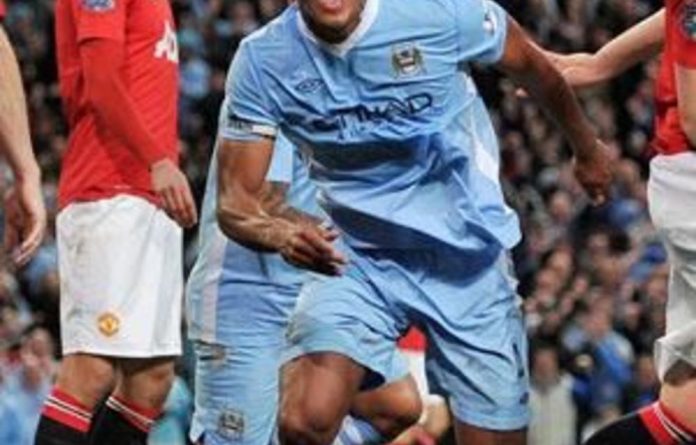 Manchester City seized control of the Premier League title on Monday after Vincent Kompany’s first-half header powered them to a 1-0 win over bitter rivals Manchester United.

Kompany headed home from a corner on the stroke of half-time to settle a highly charged title duel at Eastlands which saw City go top of the table by virtue of their superior goal difference.

The victory means that wins over Newcastle and Queens Park Rangers in their remaining games will almost certainly see City claim their first league crown in 44 years while United would finish the season without a trophy.

Kompany’s winner settled an at times ill-tempered duel which was beamed to a worldwide audience estimated in the hundreds of millions but mostly failed to live up to its pre-match hype.

The pressure-cooker nature of the occasion was reflected by an ugly touchline bust-up involving United manager Sir Alex Ferguson and his City counterpart Roberto Mancini on 76 minutes.

A visibly enraged Ferguson had to be restrained from confronting Mancini after the Italian had marched into the technical area to complain after Nigel De Jong was booked for a cynical challenge on Danny Welbeck.

Mancini later brushed off the spat and insisted United remained in pole position because of their “easy” remaining games against Swansea and Sunderland.

“United have easy games, they play against Swansea and Sunderland,” Mancini said. “We have Newcastle and QPR — one plays for Champions League, one plays for relegation. For United it will be easy but we have two strong teams.”

‘Badgering’
Meanwhile Ferguson accused Mancini of “badgering” match officials throughout the game but admitted his side could have few complaints after a toothless display that saw them fail to muster a clear shot on goal for the first time in three years.

“Mancini was badgering the ref and the fourth official all game. He was complaining about refs all week, but he can’t complain about this one,” Ferguson told the BBC.

“I can’t complain about the result, they were more of a threat from counter-attacks. It was a damaging result, they are in the driving seat and we are up against it. They only need to win two more games and they win the league, simple as that.”

City captain Kompany celebrated a famous win after a goal that saw the blue half of Manchester seal a home-and-away season double over United.

“It’s far from over and we know that, but to give our fans two wins over United this season … we have to finish it off and we have to do it over the next two games,” Kompany said.

A scrappy first half saw City dominate possession and territory but struggle to create clear chances against a United side who had flooded midfield with five men, leaving Wayne Rooney as the lone striker.

Samir Nasri brought the Eastlands crowd to their feet with a jinking run on 16 minutes which took him beyond the United defence before the France international played in Carlos Tevez, whose cutback was cleared by Phil Jones.

Possession
The fractious mood of the evening was reflected at Ferguson’s angry reaction after Kompany was booked for a clumsy challenge that pole-axed Rooney.

On 25 minutes Sergio Aguero nearly gave his watching father-in-law Diego Maradona something to cheer about only for his volley from Joleon Lescott’s flick-on to sail over the crossbar.

The diminutive Argentinian attacker was off-target 10 minutes later, miscuing his shot wide after good work down the right once more from Nasri as City ramped up the pressure.

The moments before half-time marked City’s best spell of the match, with David De Gea needing to be alert to intercept a menacing cross from Gael Clichy before Tevez produced one surging run from inside his own half that had United scrambling back to cover.

Yet just when it looked as if United had survived the late onslaught, City went ahead. David Silva curled in a corner from the right and Kompany leapt above Chris Smalling to power an unstoppable header past De Gea.

The second half saw City again control possession, and they went close to scoring with late chances from Clichy, Nasri and Aguero.

United, meanwhile, struggled to create any chances of note, their attempts to get back in the game foundering on a superb defensive effort from City, with Kompany and Lescott unyielding throughout. — AFP