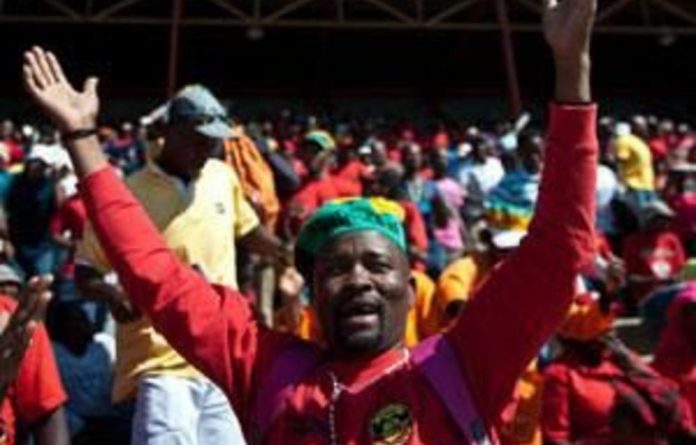 The fight against tolling was the hot topic on Workers’ Day on Tuesday as the Congress of South African Trade Unions (Cosatu) and the South African Communist Party (SACP) promised to step up their campaign against the government’s plan to implement an e-tolling system in Gauteng.

Cosatu said it would continue its fight against the e-tolling project until the tolls had “finally been scrapped”.

Spokesperson Patrick Craven said in the federation’s Workers’ Day statement that the postponement of the R20-billion e-toll project was “a direct product of the workers’ power and sacrifices”.

“We call upon government rather to prioritise the roll-out of efficient, reliable, affordable and safe public transport for all the people of South Africa,” Craven said.

“Our campaign goes on until these tolls have been finally scrapped.”

Craven said the federation would also take up issues about the existing toll gates “whose prices are forever on the rise”.

People around Zeerust were paying R71 for driving through the Swartruggens toll gate and R40 for only travelling 80km in the Middleburg area.

“Consumers face massive price increases as a result of the extra cost of transporting goods to the shops being passed on to the shoppers,” Craven said.

Power and sacrifices
He said Gauteng’s toll road project, which was postponed on Saturday after the North Gauteng High Court in Pretoria granted an interdict against the South African National Roads Agency Limited (Sanral) — after an application by the Opposition to Urban Tolling Alliance group was put on hold when Cosatu held discussions with the ANC.

“We are happy to announce that in our discussions with the ANC we agreed that we must postpone the implementation of the e-tolls in Gauteng for a month while we work on alternative funding methods,” Craven said.

“This is a direct product of the workers’ power and sacrifices.”

The federation also took aim at labour brokers comparing them to “human traffickers” who were making huge profits.

“Cosatu demands that labour brokers must be completely banned.

“They are nothing more than human traffickers, making huge profits by hiring out workers to their client companies as if we are no more than commodities like office furniture or stationery,” Craven said.

The SACP urged the tripartite alliance to unite in the fight against toll highways to avoid abandoning the issue to “essentially right-wing, middle class interest groups”.

Hijacking the issue
The party said in a May Day statement on Tuesday that there was a risk that the e-tolling issues could be hijacked by DA, AfriForum and the Automobile Association.

“The delay gives us some more space as the tripartite alliance to find a united way forward,” the party said.

“It is absolutely essential that we do now unite ourselves — otherwise we will abandon this issue to the DA, AfriForum, the Automobile Association and other essentially right-wing, middle class interest groups.”

At a rally at Botshabelo stadium in the Free State, President Jacob Zuma called for unity within the alliance.

He told a modest crowd that the alliance had a huge task of creating unity within its individual partners.

“We have a huge task of the alliance. There are those against us working hard so that we do not achieve success,” he said.

Zuma also urged the different leaders of the alliance to be clear on contentious issues so there was no uncertainty among their members.

In its Workers’ Day statement the ANC saluted workers for their role in developing and sustaining the economy and for their part in South Africa’s liberation.

“Their progressive and revolutionary outlook has been key in defining the parameters and content of our struggle.”

Democratic Alliance (DA) leader Helen Zille accused Cosatu of working against the interests of the unemployed and stalling the effort to bring jobs.

In a speech prepared for delivery at a Workers’ Day event in Midvaal, Gauteng she said the trade union federation was stuck in a 1950s British model of “hostile central bargaining”.

It was the only organisation in South Africa that was refusing to take part in programmes to end unemployment.

“Cosatu, which played such a pivotal role in creating South Africa’s democracy, runs the risk of being left behind if it remains stuck in the 1950s British model of hostile central bargaining between ‘bosses and workers’,” Zille said.

“Tragically, Cosatu [alone among the trade union federations] is working against the interests of the unemployed, keeping them permanently locked out, and stalling the effort to bring jobs, redress and reconciliation to our society.”

Countries with growing economies and growing employment had outgrown the ‘zero-sum’ model where one side’s gain was the other side’s loss, she said.

Investing in jobs
“To create more jobs we need more people who will invest capital and skills, who will take investment risks to open factories and to start businesses, thus creating more jobs,” she said.

Trade union Solidarity said workers should become part of a culture of life-long learning to improve their skills and increase their income.

“This year employees should not only ask for double-figure increases; they should aspire to doubling their salaries through improved skills,” Solidarity said in a Workers’ Day statement.

“We believe that trade unions’ new strategic role in South Africa should be to make members more employable by improving their skills.

“This is the best route to job security in South Africa,” Buys said.

Sanral has remained silent over the high court ruling and has not responded to the ruling to indicate whether it would appeal or dispute the decision.

Attorney acting on behalf of Outa, Pieter Conradie, said government would have to consider whether it would apply for leave to appeal the matter.

“I am of the view that another court will not arrive at a different decision as that of Judge Prinsloo and that the government will have difficulty in persuading Judge Prinsloo to grant them leave to appeal,” said Conradie.

Public outcry
He said considering the public outcry and opposition towards the tolls, it would also be insensitive of government to apply for leave to appeal.

He said as the ruling stood, people had no obligation to purchase e-tags and those who had done so already could be refunded.

“The public purchased the e-tags with the understanding that e-tolling will be implemented on April 30. This did not happen and may not happen for many months or may never happen.”

Conradie said it could not be determined how low e-tolling would be put on hold for as it would also depend on what decisions government decided to make.

The process for the alliance to acquire all court documents from government could take up to two to three months, he said.

Next step
Since the interdict was granted, Outa would wait for government to submit to it all the records of the documents which were considered by all government ministers who were involved in determining how e-tolling would proceed.

“The record will entail, for example, correspondence, reports, memoranda, documents, evidence, transcripts of recorded proceedings and other information which were before the respondents.

“The review process entails that, we now wait for the record and when we are satisfied that we are in possession of a full record, the applicants are entitled to file supplementary affidavits,” said Conradie.

“With regard to the contract between Sanral and the e-tolling consortium, a copy will be requested as part of the record as surely the minister of transport should have considered any agreement between Sanral and foreign contractors, as such agreement must have an effect on the price for using the roads to be paid by the public,” he said.

Conradie said only when all affidavits had been filed that an application would be made to court for a court date for the review application to be heard.

After the ruling was made the department of transport said it would study it.

“We respect the decision … We will study the ruling thoroughly and decide on the next course of action,” the department said. — Sapa