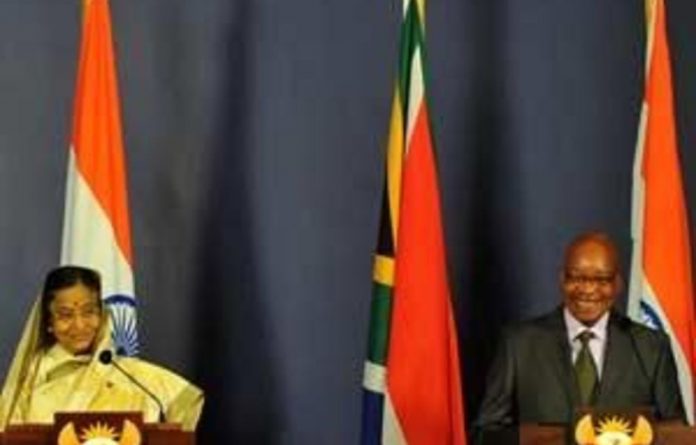 “President Jacob Zuma and I will be participating in the business forum tomorrow [Thursday] to listen to the views of captains of industries from both sides, and encourage them to contribute to the economic exchanges,” Patil told reporters in Pretoria.

President Jacob Zuma received Patil and her delegation at the Union Buildings earlier on Wednesday. It was part of a state visit which would see them visit Gauteng, Durban and Cape Town.

“Indian companies are investing in capacity building by creating jobs and playing an important role in the development and economic growth of South Africa,” said Patil.

The Indian president, on her last state visit before her term ends, said the two countries would monitor the implementation of previous agreements. These include agreements on health, science and technology, renewable energy, tourism, and infrastructure development.

She said the two states would work together to ensure their trade was not harmed by piracy in the Indian Ocean. “We are deeply committed to working with the government of South Africa and its people to ensure that our trade routes are not affected and we are able to bring a sense of safety and security,” Patil said.

Zuma said the visit would see the two countries strengthening their social, economic and cultural ties. He said it was especially important for South Africa to enhance its cooperation with India in infrastructure development and trade relations.

“We have once again extended an invitation to Indian business to invest in our infrastructure development programme, in which we are to invest more than R800-billion until 2014,” he said. This would translate into R300-billion in the energy sector and R262-billion in transport and logistics, said Zuma.

He said the presidential infrastructure co-ordinating commission had identified and developed 43 projects from state-owned enterprises, as well as national, provincial and local government departments.

Zuma said South Africa would seek help from India in acquiring skills in engineering, information and communication technology, finance, economics, and accounting to boost the infrastructure programmes. He said both countries had to work harder to reach higher trade figures.