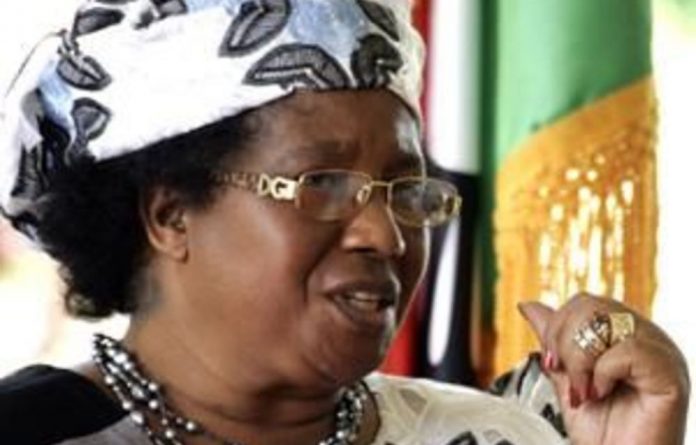 For 48 turbulent hours, she was the victim of a conspiracy that left the future of Malawi hanging in the balance. Then Joyce Banda made a critical phone call to the head of the army, asking whether she could rely on his support. He said yes. And at that moment, her place in history was assured.

“You ask how I feel to be the first female president in Southern Africa?” she said in an interview. “If I fail, I will have failed all the women of the region. But for me to succeed, they must all rally around.” Banda’s dramatic rise came when president Bingu wa Mutharika’s increasingly autocratic rule was cut short by a fatal heart attack earlier last month. As vice-president, it was her constitutional right to replace him. After overcoming resistance from Mutharika’s powerful allies, she has now set about rebuilding the country’s shattered economy and pursuing a cause close to her heart: women’s rights.

The 61-year-old first rose to prominence as a champion of female empowerment, founding organisations such as a microfinancing network for thousands of women in rural areas. She said her own experience of marriage had driven her crusade. “I got married at 22 and remained in an abusive marriage for 10 years,” she said during a visit to Pretoria. “I made the brave step of walking out in a society when you did not walk out of an abusive marriage.” Referring to Ellen Johnson Sirleaf of Liberia, Africa’s first elected female head of state, Banda said: “Africa is changing in that regard and we are doing better than most countries. America is still struggling to put a woman in the White House, but we have two, so we’re doing fine.”

Compared with her straitlaced ­predecessor, Banda dresses colourfully. Her spectacles have sparkly designer frames. She has wasted no time in appointing a new Cabinet, sacking the central bank governor and police chief and reversing her predecessor’s most unpopular decisions. She has pledged to follow International Monetary Fund advice by devaluing the national currency by 40%.

“We brought this upon ourselves because of our carelessness and arrogance,” she said. This included falling out with a leading donor, the United Kingdom, whose high commissioner was expelled by Mutharika. “We have assured the UK that will not happen again,” Banda said. —