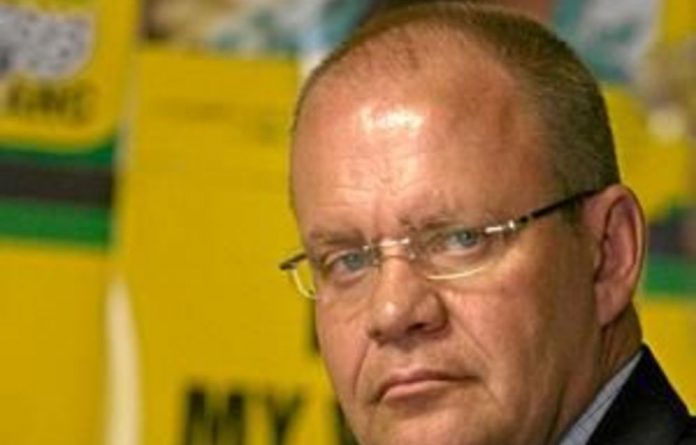 There are two questions around former ANC spin doctor Carl Niehaus’s potential return to political life. This follows his first interview since his public meltdown around allegations of debt, fraud and lies three years ago on the pages of the Mail & Guardian.

The first is: Will he get a job with the ANC again as he alluded to in a wide-ranging interview on Talk Radio 702; and, second, has he paid off all his debt?

Straight after his tearful interview in February 2009 with the M&G, Niehaus’s world imploded and he resigned as ANC spokesperson in the wake of an avalanche of accusations including of unpaid debt, falsification of his qualifications and forgery of senior politicians’ signatures.

Niehaus admitted in the M&G interview that he:

When Niehaus was chief executive of the Gauteng Economic Development Agency and could not rescue himself from mounting debt, it was alleged that he forged signatures in a letter of several Gauteng government officials, including the province’s former finance minister, Paul Mashatile.

The letter was intended to secure a loan for Niehaus from a businessman who hoped to use it to ensure favourable treatment from the Gauteng government on property deals. Apart from confessing this transgression to the M&G, he also confessed to Mashatile, who told him to quit or face a disciplinary inquiry, the M&G reported at the time.

After three years in the political wilderness, Niehaus appeared to be relaunching himself in the Wednesday morning radio interview with 702 anchor John Robbie, when he spoke about “a formal position” being found for him in the ruling party.

Niehaus said: “I am often in Luthuli House. Soon there will be a formal position, but let the ANC talk about that, not me. My involvement in the ANC is increasing by the day.”

By Wednesday afternoon, Niehaus seemed to sing a slightly different tune. Although he had not been offered a job in the ANC, he told the M&G, if the opportunity arose, he had a contribution to make.

Although some in the media had already interpreted his remarks to mean that he believed he was up for a top position in the party, he said this was not true as there had only been “loose discussions”.

His love for the ANC was still as strong as ever, he said, and his comrades had given him a lot of support after his fall from grace.

ANC spokesperson Keith Khoza said the party knew nothing about Niehaus’s appointment to any position.

“I will speak for [ANC] communications to say that we have not been briefed about such,” said Khoza. “So we are unaware what he is talking about. If he has spoken to anybody, that person has not spoken to us.”

A senior government official and veteran ANC member said the comments by Niehaus showed that he was probably still struggling financially.

“His situation has probably not improved. If this were true that he was offered a position, why would he go public? It has never happened before that someone says the ANC will announce a position for me.”

In the radio interview Robbie asked him pertinently: “Have you paid all your debts?”

The amount that Niehaus was said to have owed was R4-million. When asked this week by the M&G to clarify, he said: “I don’t want to go into detail about my debt. I know some newspapers have said it is more than R4-million but I will say it is considerably less than that. I have settled a fair amount of it, through a combination of settling the debt and arranging payment to get the debt down. Some debt has also expired, as I am no longer legally obliged to pay it.

“It has been written in the press that I borrowed money from ANC heavyweights Cyril Ramaphosa, Pallo Jordan and Tokyo Sexwale. I don’t owe any ANC figures any money. You can ask them all.”

Reliable sources this week said that he has not repaid the Sexwale or Jordan debts. ANC stalwart and deputy minister of science and technology Derek Hanekom tweeted that Niehaus had not repaid his debts

“I recall a few years ago he [Hanekom] once helped me out and gave me some money,” Niehaus told the M&G this week. “But he said to me I should consider it a gift. I don’t know what is going on. Maybe he thinks I should have repaid it. But he never said I should.”

In 2009 Cheryl Clur, the owner of a travel agency in East London, revealed that Niehaus had fiddled her out of R80 000.

“He used an honourable person to phone us on his behalf, which made us believe he would pay,” she recalled this week.

Given the situation, she said she took the unusual step of booking a last-minute holiday for his family to Mauritius, taking on the risk without any payment upfront. He only paid R20000 and she has now written the debt off.

“We tried everything, but it got to a point where it was too difficult to get the money back. He kept changing jobs and we couldn’t find him,” said Clur. “He knew upfront that he would never pay for that holiday and nobody in our office got bonuses that year. He stole from us.”

Rhema Church is on record as saying he does not owe them anything.

Niehaus said he had sought the help he needed to manage his debt and his situation after his embarrassing resignation from his job.

“I saw a psychologist for quite some time. I am not going to go into details about the debt I might have had,” he said. “I have paid quite a bit off and made arrangements.”

Niehaus is certain he can now put his past behind him. Happy to admit he supports President Jacob Zuma for another term of office and will openly campaign for him, Niehaus said he will not stop contributing to building a future for the country.

“I never left the ANC, I continued to be a member. I have helped with queries from the communications department from time to time.”

Although it had not been easy for him in the intervening years, Niehaus said he had never resigned from the party, just from his job.

Tweet little lies
Twitter was a-flutter this week with comments about Carl Niehaus supposedly paying back his debts and making a return to ANC public life, following these claims on 702 on Wednesday. Most tweets were, to say the least, quite sceptical. Sipho Kings McDermott put together a sample:

“Is the ANC on the verge of yet another Carl Niehaus recycle?”
Lucky Mbele

“My fraud charge against Niehaus is still being investigated, ANC should be wary employing him.”
Jack Bloom

“An ordinary cat has nine lives but Carl Niehaus has 90.”
Nikiwe Bikitsha

“The first part’s not quite true.” (“Carl Niehaus tells us that he’s repaid all his debts and he lost lots of friends when he was down and out.”)
Chris Vick

“He has not made any attempt to repay loans he obtained.”
Derek Hanekom