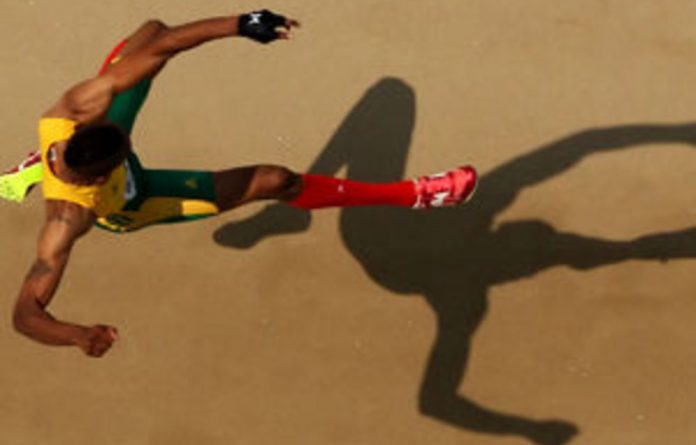 If you fancy trotting off to OR Tambo International Airport to welcome home South Africa’s Olympic team every four years, heed this warning: if you are expecting to see 12 athletes walk through the doors at international arrivals in mid-August with medals hanging around their necks, you may be disappointed.

That is because a medal haul of 12 from the London Summer Games would represent an absolute best-case scenario, if you read between the lines of what the president of the South African Sports Confederation and Olympic Committee has been saying.

Gideon Sam is the face of the committee and the local media have justifiably made much of his assertion that the South African team will return from the United Kingdom with 12 medals. That is because long jumper Khotso Mokoena’s silver was the only medal to return from Beijing four years ago and the sceptics have been having a field day with what appears to be the ultimate in wishful thinking.

When initially pressed on the subject, Sam is unmoved. “I’ve always been of the opinion that we have the athletes. Maybe it’s been a case of us not giving them enough support, but in terms of talent I don’t believe that a country with close to 50-million people can’t come up with 12 medals,” he said.

The obvious follow-up to that is “Well, where are those medals going to come from?” — even though one acknowledges that the South African team does indeed have its share of world-class Olympic athletes.

Pinning hopes on swimmers
Sam is hoping for three medals from the swimming team, taking into account that both Cameron van der Burgh (100m breaststroke) and Chad le Clos (200m butterfly) are the only South African swimmers ranked in the top three of their respective disciplines in the world.

Then there is athletics. Sam has his hopes pinned on world-class performances from 400m hurdler Louis Jacob van Zyl, 800m runner Caster Semenya and long-jump star Khotso Mokoena “on his day, if his head is right”.

Sam has omitted Van Zyl’s fellow 400m hurdler, Cornel Fredericks, who clocked the fifth-fastest time in the world this year and could be an outside bet for a medal. Then there is the men’s world championship silver medal-winning 4x400m relay team and Commonwealth Games javelin champion Sunette Viljoen, although her best throw of the year ranks her only 19th in the world.

Nonetheless, Sam is confident of three medals from athletics, bringing his subtotal to six.

Mountain biking
Thereafter, he has high hopes for Burry Stander in mountain biking. Stander is a genuine medal prospect with his pedigree as a proven world championship contender. Less is expected of Sifiso Nhlapo in the BMX cycling event, but only because injury has delayed his preparations in the past year. However, after being regarded as a medal contender in Beijing only to fall off his bicycle, he may well be hungry enough to go the extra mile and pull out the stops in London.

So, we are standing at seven. But when I push Sam for the remaining medal contenders, the best he can do is suggest that the likes of boxing, rowing and marathon running may chip in with something.

The reality is that Sam would love for the team to return with 12 medals, as would all supporters of South African sport, but it is unlikely. A haul of seven or eight medals would represent a significant achievement, assuming the athletes excelled in their respective events. And that would be something worth celebrating, taking into account the debacle that was Beijing four years ago.

Sam agrees, saying: “Two hundred and-sixty-five athletes going to Beijing and coming back with one medal? We cannot go on like that.”

What is different this time around and why was the performance in Beijing so poor?

Sam cites consolidation of all the major South African sporting bodies into the Sports Confederation and Olympic Committee as one of the reasons why the preparation for the Beijing Games was somewhat under par and underfunded.

The official formation of the committee took place towards the end of 2004, but it clearly took a few years for the body to form a real identity.

“Nobody knew what this animal was all about, even in terms of the logo,” says Sam. “They recognised the Olympic rings and the Protea and they said: ‘What is this?’ Nobody came to the party in terms of sponsorship. Even in May of 2008 my predecessor Moss Mashishi was still trying to secure funding for a team that was supposed to perform in August.”

To his credit, Sam admits that he can understand why corporate South Africa has been reluctant to nail its colours to the mast of the national Olympic team.

“Let’s be fair to the corporates,” he says. “If you run a big company and you look at the Beijing performance with a team of more than 200 athletes coming back with just one medal, I am not so sure you would want to associate yourself with such a show.

“As sports people we must be honest. We cannot just milk the corporates when we are not delivering, or are fighting among ourselves as a result of poor governance. We have to put on a good show and those sponsors will come.”

Nothing will make them come quicker than an outstanding London performance from the team and this is exactly what Sam is saying. But, come on, just how many medals is a realistic expectation?

“I am saying six or seven medals won’t be a failure for South Africa, because it’s a new beginning and a way of thinking.

“If we fall down, we will just have to pick up the pieces and head to Rio de Janeiro in 2016 as a country believing that we can do it.”