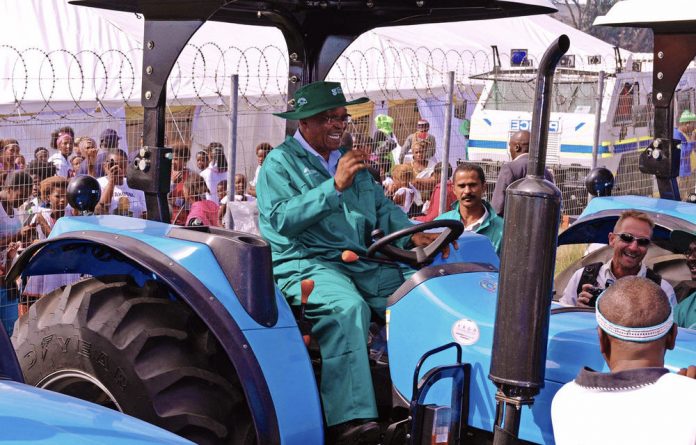 President Jacob Zuma’s campaign for a second term got under way this week as Cosatu president Sdumo Dlamini and Free State Premier Ace Magashule publicly backed him for another term and he handed out benefits from the state to potential supporters in the Eastern Cape and KwaZulu-Natal in a charm offensive.

At the weekend Zuma crisscrossed the Eastern Cape, the second-biggest ANC constituency after KwaZulu- Natal, and presented 14 tractors worth R4-million and Nguni cattle to traditional leaders and black emerging farmers in Peddie (in the former Ciskei) and Butterworth (in the former Transkei). The donation comes two weeks after he handed over keys to four new homeowners in Nkandla — his base where he has built himself a R64-million mansion.

Zuma’s multimillion-rand hand-outs have triggered complaints from some ANC members, who accused him of launching a premature campaign for his re-election using access to state resources. Zuma donated the 14 tractors through the controversial Masibambisane rural development initiative — a project he chairs and co-founded with his relative, businessperson Deebo Mzobe.

Agriculture spokesperson Selby Bokaba told the Mail & Guardian this week that the tractors were paid for by the department of agriculture, forestry and fisheries, but denied paying for the Nguni cattle. “[The department] has only paid for the tractors, which were procured for the whole Eastern Cape,” Bokaba said. “The tractors form part of the department’s mechanisation project, which is rolled out to the whole country.”

Since its launch last year, Zuma’s rural project has drawn fire for allegedly bullying government departments to make donations. The M&G understands the initiative has angered a number of directors general in Zuma’s administration after it was presented in November 2010 as the Zero Hunger campaign to fight poverty and provide food security.

Langa Zitha, director general for agriculture, defended the adoption of Zuma’s project, saying it was brought on board because it coincided with the Zero Hunger programme.

A senior ANC leader told the M&G this week that there was mounting concern in the upper echelons of the ANC over Zuma’s apparent campaigning and said this would be raised in the party’s next national executive committee meeting this month.

Another senior ANC leader from Gauteng complained about Zuma’s birthday bash at the International Convention Centre in Durban last month, where he used the event as a platform to campaign for his re-election.

“People are coming to us to say they are being invited to behind-the-scenes meetings by the pro-Zuma grouping to discuss his re-election campaign,” the Gauteng leader said. “In KwaZulu-Natal [succession] debates are all over. This thing of Zuma throwing a party was part of lobbying. People are angry. Why didn’t he do it with his children? Why call a birthday party at … such a big forum?”

Youth League taking notice
ANC Youth League deputy president Ronald Lamola said the league would discuss in its upcoming national executive council meeting, among other issues, concerns about Zuma’s apparent use of public platforms to campaign for his re-election.

Although Zuma enjoys solid and unconditional support from his home province of KwaZulu-Natal as well as in Mpumalanga, he is desperate to win support in the large Eastern Cape area to consolidate his grip on power.

Zuma no longer appears to enjoy as large a following in the Eastern Cape, which his key backers say will be crucial to him to retain the ANC presidency at the party’s elective conference in Mangaung in December.

The number of provincial delegations will be crucial to any candidate seeking to be elected at the conference. So far, Zuma supporters have lost support in three key Eastern Cape regions, including Nelson Mandela Bay, Buffalo City and Alfred Nzo. The anti-Zuma forces in the province are also confident about winning the upcoming regional conferences in Amathole and OR Tambo, which are some of the biggest ANC regions in the Eastern Cape. So far the Chris Hani region and members of the provincial executive committee are behind his re-election.

An ANC leader in the Eastern Cape said: “The areas where Zuma handed out tractors in Peddie and Butterworth have nominated our [anti-Zuma] candidates for the Amathole regional conference. The Eastern Cape’s position for leadership change is solid. No visit by any national leader will alter our approach and I know that Zuma’s core group is worried because they realise it. Zuma’s downfall in this province stems from his lack of vision, incompetence, indecisiveness, ‘Zulu-fication’ of the ANC and corrupt tendencies, such as the abuse of state resources for Nkandla and the intelligence and his security apparatus.”

The Free State is also a highly contested province and Zuma ally Magashule faces challenges to his leadership at the upcoming provincial conference. His political rivals want him to step down from the top position he has held for more than 12 years. Magashule will be competing against ANC provincial treasurer Mxolisi Dukwana, whom he recently sacked from his position as MEC for economic development.

While Zuma, Dlamini, Magashule and SACP general secretary Blade Nzimande addressed a small crowd at the main Workers’ Day rally in Botshabelo in Bloemfontein this week, dozens of ANC members marched outside the ANC’s provincial headquarters in Mangaung, demanding the removal of Magashule as ANC chairperson.

The SACP’s support for Zuma is solid, but Cosatu is divided: Dlamini supports his re-election, but its general secretary, Zwelinzima Vavi, is leading calls for leadership change in the ANC.

In what appeared to be a violation of Cosatu’s central executive committee resolution not to comment on the succession debate in the ANC, Dlamini nailed his colours to the mast at the rally and said the federation would support Zuma as ANC president beyond Mangaung. Magashule also endorsed Zuma for re-election, saying he was one of the greatest leaders the ANC has ever produced.

Speaking to the M&G this week, Numsa general secretary Irvin Jim, who is also a member of Cosatu’s executive committee, distanced the federation from Dlamini’s statement.

“That is not our position,” said Jim. “We agreed that we will support the current ANC leadership until 2012. Beyond Mangaung, we have no position on that.”

Zuma is counting on KwaZulu-Natal, which is standing solidly behind his re-election. The province, which is the ANC’s biggest with 240 000 members, is expected to bring 25% of voting delegates to the ANC’s national conference. The ANC in the province is expected to emerge unanimously with a resolution to support Zuma’s re-election after its provincial conference in Newcastle next week.

The province has taken a decision to retain the current leadership under Premier Zweli Mkhize in bid to avoid divisions and vote as a united bloc in Mangaung.

Duarte claps back at Ace in court

Duarte: Magashule’s court challenge to his suspension is premature