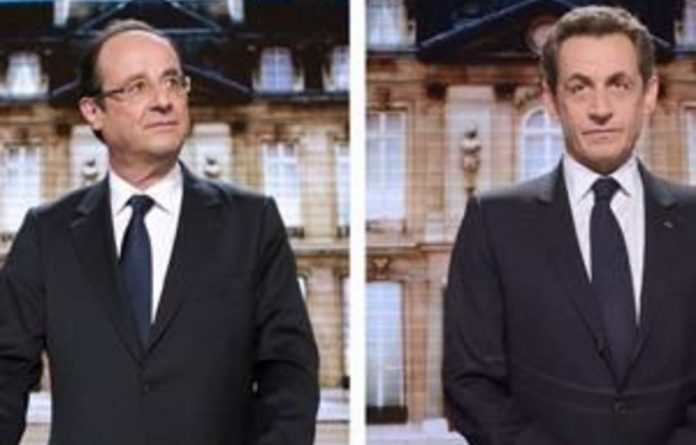 Sunday’s election, which coincides with parliamentary polls in Greece, may prove decisive for the direction of Europe as Hollande has promised he will try to temper a German-led austerity drive across Europe and reorientate the recession-struck euro zone towards growth.

Sarkozy, who became the first sitting president of modern times to finish second in a presidential first round vote, must overcome high disapproval rates because of his abrasive style.

If he did win, it would be a political sensation after a whirlwind campaign by the man many voters blame for stubbornly high unemployment, running at a 12-year high of nearly 10%, and France’s stagnant economy.

Sarkozy was due to spend Saturday at home in Paris with his wife, former supermodel Carla Bruni, while Hollande visited a market in Tulle, the town in central France where he was mayor for seven years.

“I am nervous, anxious for victory,” Hollande told a Reuters television reporter, as he shook hands with stall holders and kissed female well-wishers. “The inhabitants of Tulle won’t miss me … They will be reassured to have me as president.”

Sarkozy made an impassioned final plea to France’s 46-million voters on Friday, saying the election’s outcome was balanced on a “razor’s edge”. He warned that a Socialist victory could send the euro zone’s second largest economy spiralling into rising deficits and debt, like Greece.

Final polls before a mandatory media blackout on campaigning from midnight on Friday showed the 57-year-old conservative leader, an aggressive campaigner, cutting Hollande’s lead to just four points from around 10 a few weeks ago.

Far right the wrong way?
“On Sunday, anything is possible” wrote left-leaning Liberation on its front page, noting that while Hollande remained the clear favourite, Sarkozy was catching up fast.

The election campaign was knocked sideways by a shock performance by National Front candidate Marine Le Pen, who came third in the April 22 first round with 18% of votes, prompting Sarkozy to shift his campaign rhetoric to the right.

The president received a double setback this week when Le Pen refused to endorse him, saying she preferred to cast a blank vote, and centrist candidate Francois Bayrou, who came fifth in the first round with 9%, said he would vote for Hollande.

In a scathing personal attack, Bayrou accused Sarkozy of betraying the principles of the Republic by courting the far right with anti-European and anti-immigrant rhetoric.

On the quiet streets of Paris, passersby on Saturday said the vote was likely to be much closer than many had expected.

“Unfortunately, Sarkozy still has a chance of winning,” said Amandine, a young woman shopping in central Paris. “There are a lot of people who are still undecided. They haven’t made up their minds, so it could be him.”

Not a beauty contest
Right-wing Le Figaro newspaper contrasted Sarkozy’s steady reduction of France’s deficit in recent years with what it said were Hollande’s plans to raise taxes and spending.

“The election of the president of the Republic is not a beauty contest to find the nicest candidate,” it said in an editorial. “You choose a president for his ability to wield power, not his conviviality.”

Hollande silenced many critics — who had questioned his character and lack of ministerial experience — with a strong performance in the only presidential debate on Wednesday. While most commentators had expected the aggressive Sarkozy to win, several polls showed viewers found Hollande more convincing.

Campaigning in the heartlands of the National Front, in Moselle in northeast France, Hollande criticised what he said were Sarkozy’s divisive tactics and warned his supporters against complacency.

“I want a large victory,” he told RTL radio on Friday. “The French must give the winner the means to act. Do not leave a hobbled victor who will have problems from the day after the vote.”

Voting began on Saturday in the north Atlantic islands of Saint Pierre and Miquelon, just off the coast of Canada, and was due to begin later in the day in several other French overseas territories.

Polls in mainland France were due to open on Sunday morning, with voting stations in big cities remaining open two hours longer.

The first official results will be released after the last voting booths close at 8pm.

A new Franco-German consensus
The prospect of a victory for Hollande — who would be the first Socialist head of state since Francois Mitterrand left office in 1995 — had initially alarmed some investors. He has pledged to raise taxes on big companies and the rich and to temper a German-inspired drive for austerity in Europe.

Yet French 10-year bond yields slipped below 2.9% on Friday — their lowest level since October — suggesting there is no panic about Hollande. He has recently stressed he would quickly pass laws to balance the budget by 2017 if elected.

Angela Merkel’s German government has appeared increasingly relaxed at the prospect of a Hollande victory since he made it plain he would not seek to change the essence of a German-backed budget discipline pact signed by 25 EU leaders last month.

“We will work closely together with France no matter what happens in the election,” German Finance Minister Wolfgang Schaeuble said on Friday.

If elected, Hollande would seek to lay the foundations of a new Franco-German consensus on growth and smooth bilateral relations on his first trip to Berlin, his campaign manager Pierre Moscovici has said. — Reuters.