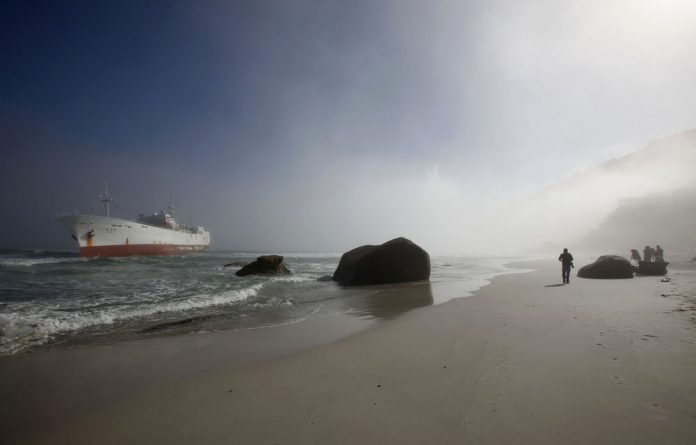 Attempts to salvage a 50m-long fishing trawler off First Beach, Clifton, have been hampered largely by low tides, the South African Maritime Safety Authority (Samsa) was reported as saying on Wednesday.

“Our biggest problem is a lack of water, silly as that may sound, because of neap tides. As we moved towards spring tides there will be more water coming in,” regional manager Dave Colly told radio station 567CapeTalk.

A neap tide is a low high tide. Tides change every seven days according to the position of the earth, moon and sun.

“The other big thing we have had to do is to weld on a much stronger towing point [on Wednesday]. It’s not a nice, young ship and [the old towing point] is starting to crumble,” Colly said.

The team would also be decanting fuel into a rubber bladder on the beach as a precaution against any oil spills.

Ward councillor for the area Beverley Schäfer told the radio station that time was of the essence as the boat had already moved 25 metres towards the beach since it ran aground.

According to Colly, the national transport department was footing the bill for the salvage operation. It had a contract with Smit Amandla Marine.

Samsa was hoping to get payment from the ship’s owner, although he had not yet been found. It was unclear whether he had insurance or not.

The Eihatsu Maru long line fishing vessel, a Japanese ship, ran aground at 5.15am on Saturday in thick fog. It was carrying 90 tonnes of diesel and 50 tonnes of fish.

The salvage attempts would not affect Fourth Beach’s Blue Flag status, the city assured residents. A blue flag is an international award given to beaches that meet excellence in areas of safety, amenities, cleanliness and environmental standards.

Of the 28 Taiwanese crew members on board, 19 were evacuated. The remaining crew and the captain were required to stay on the ship under international maritime law. – Sapa