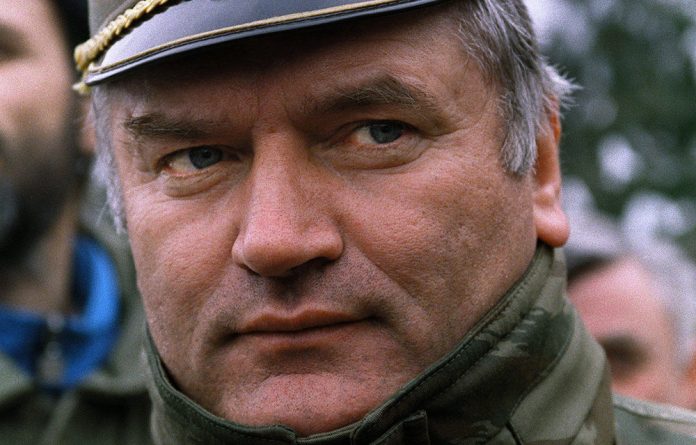 On Thursday they said the former Bosnian Serb army chief Ratko Mladic had played a commanding role in the Srebrenica massacre.

“Mladic himself was on the ground and personally involved,” prosecuting counsel Peter McCloskey told the court in The Hague on the second day of the former general’s trial for war crimes, crimes against humanity and genocide.

Almost 8 000 Muslim men and boys were allegedly slaughtered by Mladic’s forces in Srebrenica in July 1995 as part of what prosecutors say was a brutal campaign of ethnic cleansing in the 1992-95 Bosnian war.

“We give this town to the Serbs as a gift,” Mladic said in footage taken shortly after the seizure of Srebrenica, then a UN-protected enclave, that was shown to the International Criminal Tribunal for the former Yugoslavia.

McCloskey said most orders were given orally, but that certain “crucial” military documents had survived and that former Mladic subordinates were willing to testify against him.

Now 70, Mladic, dubbed the “butcher of Bosnia”, has been indicted on 11 counts of genocide, war crimes and crimes against humanity for his role in the Balkan country’s war that killed 100 000 people and left 2.2-million people homeless.

“Ratko Mladic assumed the mantle of the criminal goal of ethnically cleansing Bosnia,” prosecutor Dermot Groome told the court on the opening day of the trial on Wednesday.

“The prosecution will present evidence that will show without reasonable doubt the hand of Mr Mladic in each of these crimes,” Groome said, as relatives of the Srebrenica victims watched the proceedings on a live broadcast in Sarajevo.

The former Bosnian Serb commander had pleaded not guilty to the charges at an earlier court hearing last June. He faces life imprisonment if convicted.

In his opening address, the prosecutor displayed population maps showing the ethnic distribution in Bosnia before and after the war, explaining how mixed or predominantly Muslim municipalities became exclusively Serbian after a campaign of ethnic cleansing he said was one of Mladic’s “strategic objectives”.

Prosecutors also hold Mladic responsible for the 44-month siege of Sarajevo where his forces waged a “terror campaign” of sniping and shelling that left an estimated 10 000 people dead, the vast majority of them civilians.

“Sarajevo was a model of diversity, a cosmopolitan city,” said Groome.

“They [Bosnian Serb leaders] sought to destroy it, to sever the city in half, with the Serbs living in one part and the non-Serbs in another part.”

It was in pursuit of a “Greater Serbia” that Mladic allegedly also ordered his troops to “cleanse” other Bosnian towns, driving out Croats, Muslims and other non-Serbs.

After the war, Mladic continued his military career but went into hiding in 2000 after the fall of his ally in Serbia, Slobodan Milosevic.

Indicted for war crimes, he was on the run until May 2011 when he was arrested at a relative’s house in Lazarevo, northeastern Serbia and flown to a prison in The Hague several days later.

Defence lawyer Branko Lukic said Mladic suffered three strokes in 1996, 2008 and 2011 and was partly paralysed on his right side.

Mladic however appeared in better shape than at his first appearance last June when he told the court he was a “sick man”. – AFP

Only 1.4% of cars made are electric