At least six dead in Italy after strongest quake in years 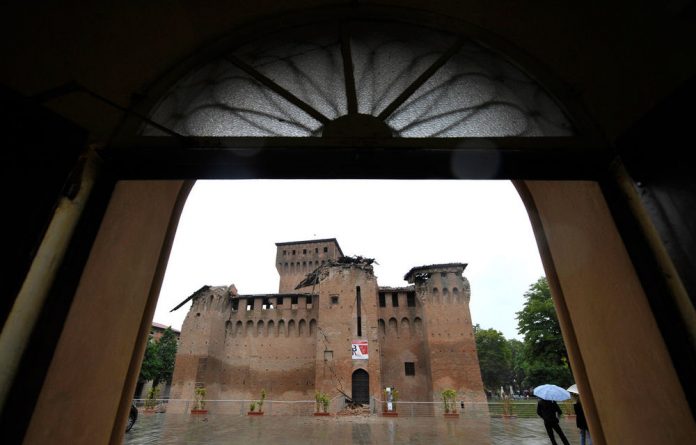 Facebook
Twitter
WhatsApp
Linkedin
ReddIt
Email
Print
0
The quake, which happened early on Sunday, awoke terrified citizens and sent thousands running into the streets.
The US Geological Survey recorded the tremor’s magnitude at 6.0. It struck at 4.04am (2.04am GMT) and was followed by a series of jolting aftershocks. At least two of them reached magnitude 5.1, sowing fresh panic, further damaging already weakened buildings and causing more structures to collapse.
“I am 83 and I have never felt anything like this,” said Lina Gardenghi in the town of Bondeno, near Ferrara.
The epicentre of Italy’s strongest quake in three years was near Modena in the Emilia-Romagna region of the Po valley. The tremors were more deadly than any since 2009 – when the central city of L’Aquila was devastated – and were felt as far away as regions bordering France in the west and Slovenia to the east.
Among the dead was a woman of 106, killed in her bed by a falling roof beam at her house in the countryside.
Losses
The tremors seriously damaged many historic churches and other buildings, adding up to the greatest loss to Italy’s artistic heritage since an earthquake in 1997 ravaged the Basilica of St Francis in Assisi, where the ceiling collapsed.
On Sunday, the imposing 14th-century Estense Castle, symbol of the town of San Felice Sul Panaro and its most important building, was severely damaged.
The tops of several of its smaller towers collapsed and there were fears that the main tower, weakened by cracks, could tumble. Three of the town’s churches were severely hit, damaging centuries-old frescoes and other works of art.
“We have practically lost all our artistic patrimony,” said Alberto Silvestri, mayor of San Felice. “Churches and towers collapsed. The theatre is still standing but has cracks.”
The quake left a gaping hole and gashes in the side of the Renaissance style town hall in Sant’Agostino, which officials said was in danger of total collapse. The town’s streets were strewn with rubble and the stench of gas filled the town and raised fears of explosions.
Prime Minister Mario Monti cut short his trip to the United States and said his Cabinet would declare a state of emergency, freeing up funds for quake relief.
Night shift deaths
Emergency service chief Franco Gabrielli said the death toll included five people killed directly by the quake and another who suffered a heart attack because of it. Officials said up to 3 000 people would not be able to return to their homes for the time being.
In Bondeno, a Moroccan man working a night shift in a polystyrene factory died when he was hit by falling debris.
A 57-year-old Italian was killed when part of an ironworks in Sant’ Agostino collapsed, and two men were killed in the same town when part of a ceramics factory collapsed.
“He wasn’t supposed to be there,” the mother of one of the victims said. “He changed shifts with a friend who wanted to go to the beach.”
A series of strong aftershocks hit the area, two having a magnitude of 5.1. Mayors ordered residents to stay outdoors pending checks by structural engineers and began preparations to house those who could not return to their homes.
The quake was centred 35km north-west of Bologna at a relatively shallow depth of 10km, the US Geological Survey said.
The last major earthquake to hit Italy was the 6.3 magnitude shock which killed nearly 300 people in L’Aquila in April 2009. – Reuters
Facebook
Twitter
WhatsApp
Linkedin
ReddIt
Email
Print