South African women’s gripes with ‘too many rights’ 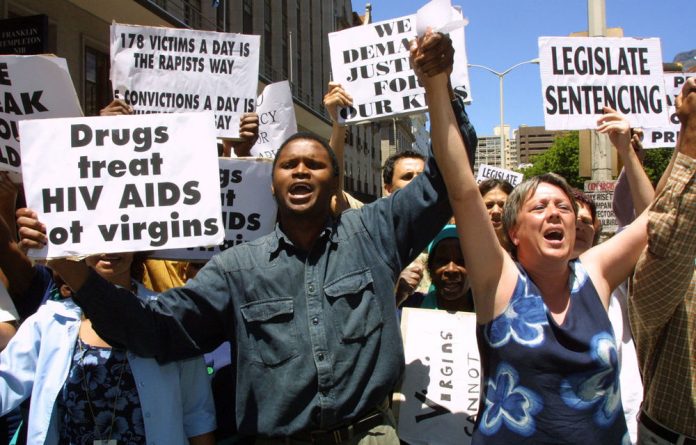 Facebook
Twitter
WhatsApp
Linkedin
Email
Telegram
0
National women’s campaign Amazwi Abesifazane (voices of women), which aims to give marginalised and rural women the opportunity to voice their opinion on service delivery in nationwide workshops, on Sunday launched a report in Braamfontein showing these viewpoints.
This report was the third and final report to be produced by the group and focused on the workshops held in Gauteng, KwaZulu-Natal and Free State in 2009.
Women throughout the country were asked to tell their stories around the theme “What democracy means to me”. The stories were analysed and submissions for various parliamentary and legislature portfolio committees were outlined in the report.
Rights concerning education, reproduction, and rights granted to children were particularly contested by the women who participated.
“What pains me as a woman is the Termination of Pregnancy Act. I ask that it be demolished [repealed],” said Makhosazana Virgina Dube, of Uthekela in KwaZulu-Natal.
Discipline
Mimi Sauli, from Ethekwini, agreed, saying: “Another thing that is not right is the fact that children are given permission to have abortions, which is against the will of God. And with regard to the abolition of corporal punishment in schools, parents were not consulted.”
Other women were said pregnant schoolgirls should be excluded from education.
“Children who fall pregnant while they are at school will never realise that falling pregnant is wrong,” said Zanele Princess Majola, from Ilembe in KwaZulu-Natal. “A pregnant child must stay at home until she gives birth because her presence at school is disturbing both the teachers and learners.”
Constance Nani, from Sedibeng in Gauteng, said she felt children enjoyed too much protection.
“Children have too many rights now, so it is difficult to teach them now,” she said.
The report recommended the portfolio committee on justice should hold national public hearings on abortion legislation.
Communities should be made aware that education was a right for all children and measures taken in schools to prevent teenage pregnancy should be reviewed, the report added.
Development
Service delivery, healthcare and housing were key concerns for many.
“Here in the rural areas, there is no development; we do not have services such as water, electricity and roads. We travel a long distrance to town from where we live,” said Monica Mbongwa, from Zululand. From the same district, Samkelisiwe Buthelezi complained about water and fuel.
“Life is tough when it comes to basic water. I drink contaminated water with the pigs. We share one tap in the vicinity … I find myself having to walk a long distance to the bushes to collect some wood because there is nothing I can use to make fire.”
Ntombifuthi Makhaya, from Mgungunglovu in the same province, added simply: “I am struggling; I have no electricity and no toilet.”
Joalane Hilda Tjakata from Ventersburg in Free State asked for an increase in the number of ambulances, while Catherine Mehale from Tshwane complained about the lack of services for deaf women.
“Democracy should give deaf women RDP houses,” she said.
‘Envy’
Jane Rasebopela from Metsweding in Gauteng said democracy was working for some but not for others.
“We would ask the people who are in power to try and visit places like Ekangala near Bronkhorstpruit because we still lack many things. We still don’t know what is happening about the houses that were registered,” she said.
“We don’t have information on when we are going to get them. When we watch TV we can see that other places are improving because of democracy and we envy them. We can see how beautiful their houses, schools, and other buildings are that the government built.”
In response, the report recommended that efforts to supply adequate housing be stepped up, and that public hearings be held on the issue. A health needs analysis should be commissioned for each district.
Unemployment and crime also featured prominently in the women’s stories.
“Jobs are scarce and consequently our sons are involved in crime because they need money,” said Mavix Phali from Sisonke in KwaZulu-Natal.
No jobs
Noloyiso Portia Mavikela from Ekurhuleni said she had never been employed.
“I never got a job after completing school and I kept myself busy with community work; that is the only thing that keeps me going,” she said.
To address these concerns, the portfolio committee of labour was advised to hold hearings on women unemployment in Gauteng, which should encourage the labour department to develop a comprehensive strategy to upskill and reskill unemployed people.
In addition, the labour department was recommended to investigate ways to create rural jobs by way of learnerships, internships, and graduate training programmes, assisted by the private sector. The department could also provide incentives to businesses to hire and train inexperienced young graduates, the report recommended.
Many women spoke about the effect of crime on their communities.
Nokuthula Dlamini, from Amajuba in KwaZulu-Natal, blamed the abolition of the death penalty for an increase in crime.
“Criminals go to jail today and tomorrow they are free. The police service has lost its dignity because we cannot trust them like before; they also do crime,” she said.
“Women are still sexually and verbally abused … Domestic violence is still rampant … crime, the abuse of women and the elderly, and the rape of children by men must stop,” said Nomvo Mkizwana from Sisonke in the same province.
‘No future leaders’
Free State resident Kenosi Marjorie Mosoge, noted that crime impacted future development.
“If people continue to rape, kill and destroy buildings, there will be no future leaders,” she said.
To address these concerns, community programmes should focus on where women should lay complaints.
Communities should be informed of appropriate action to take when police failed to respond to them, and how to lay complaints about crime.
The campaign was initiated by Parliament and carried out in partnership with non-governmental organisation Create Africa South, as well as provincial legislatures around the country. – Sapa