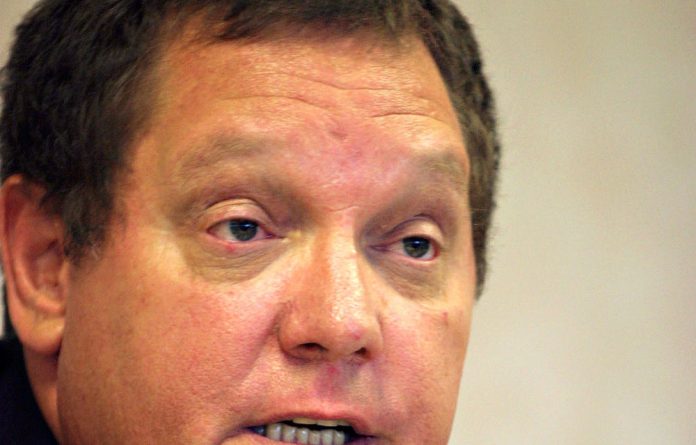 Facebook
Twitter
WhatsApp
Linkedin
ReddIt
Email
Print
0
“DRDGold CEO Niel Pretorius has responded to reports about advocate Johnny de Lange’s comments during a parliamentary committee briefing [Monday] on the acid mine drainage [AMD] issue,” the gold producer said in a statement on Tuesday.
Pretorius had been invited to make a written submission after he had contacted De Lange’s office, and had now done so, it said.
On Monday, De Lange’s committee received a briefing from senior water affairs and Trans-Caledon Tunnel Authority (TCTA) officials on the management of AMD in the Witwatersrand mining region.
The officials told MPs they were experiencing some problems involving access to land in the region’s Central Basin, and that reaching a “cooperative arrangement” with DRDGold was a challenge.
Water affairs chief operations officer Trevor Balzer told the briefing that what DRDGold was “trying to do at the moment, in giving us access to their land, is saying, ‘well, indemnify us from any claim'”.
‘Blackmail’
An angry De Lange took strong exception to this, calling it “blackmail”.
“How can people blackmail you, to tell you we’ll give you access to the land … but by doing that we want to be indemnified from any other obligations? How can we even negotiate with people like this? We should just give them directives … and tell them to do it! And if they don’t, we should donder [beat] them!” he said.
He also instructed water affairs to write a letter to DRDGold stating that, as a committee, “we absolutely abhor what they’re doing, and from our side we will be opposed to any kind of threat … and coercion.
“We absolutely will not [accept] that the law will not be applicable to a mine because they’ve threatened us, [by not allowing] us to do certain things on their property.”
He further vowed to have the gold producer appear before the committee. “I will find something that will get them to this committee … I want them to come before the public and say what they said. We’re going to do that.
We’re not going to take nonsense like that… that is absolutely unacceptable,” De Lange said. In its statement on Tuesday, DRDGold said that after its written submission, it expected to hear from De Lange soon.
“When he does, and if it is appropriate, DRDGold will issue a statement,” the company said. &ndash Sapa
Facebook
Twitter
WhatsApp
Linkedin
ReddIt
Email
Print