The top brass of the Umkhonto weSizwe Military Veterans’ Association (MKMVA) turned investment holdings into their personal piggy bank, using funds to pay for jewellery, spa treatments and school drama lessons, and to withdraw large sums of cash before Christmas, a forensic report has alleged. The association is an influential substructure of the ANC, often used to fight factional battles. It has long been plagued by suspicions of financial malfeasance, while rank-and-file veterans live in poverty. The draft investigation report, by auditing firm SizweNtsalubaGobodo, directly fingers former association treasurer Dumisani Khoza, former chairperson Deacon Mathe, current treasurer Johannes “Sparks” Motseki and current chairperson Kebby Maphatsoe. It alleges that they helped themselves to R5.4-million, almost half of all the money coming into two accounts that the auditors scrutinised. It also says they “maintained other interest[s] as a result of their involvement with MKMVA” (See graphic). The veterans behind the report have laid criminal charges against Khoza, Mathe, Maphatsoe, Motseki and the deputy public service minister and current secretary of the association, Ayanda Dlodlo, who received a R40 000 cash payout from the association in December 2008. Deputy President Kgalema Motlanthe and the speaker of Parliament, Max Sisulu, have also been drawn into the fray — they have been cited as respondents in an urgent court application to freeze all investment accounts and trusts held by the association pending a full forensic audit. Both the report and the court action are the initiative of a group of former soldiers from exile known as the “commissariat”, which the ANC national general council revived and endorsed in 2010 as a political resource for the party. The report makes no mention of Motlanthe or Sisulu. However, the wider aim of the court action could embarrass them and other senior ANC figures who have been involved in the veterans’ financial affairs as custodians, benefactors or beneficiaries.   ‘Tip of the iceberg’ The Mail & Guardian has seen the forensic report, which analyses the cash flows of two bank accounts — Mabutho Investment Holdings’ FNB account and MKMVA Investment Holdings’ Standard Bank account — between October 2005 and June 2011. A total of R12-million flowed into both accounts. Commissariat spokesperson Alex Mashinini insisted, however, that “[the] Gobodo [report] is just the tip of the iceberg”. A vast and opaque web of investments is believed to have been created in the name of the veterans. 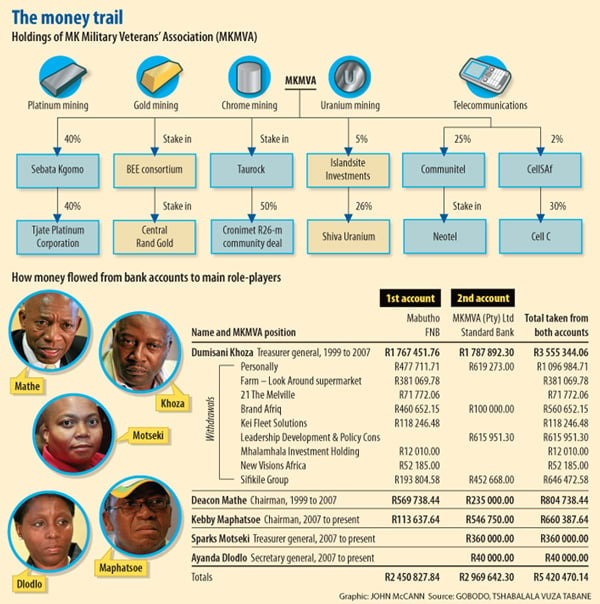 But the investigators are careful to point out that they conducted a cash-flow analysis based solely on bank statements, and that “it does not suggest that these individuals were not entitled to some of the funds” or “that some of the funds might have been paid back”. “It merely gives an indication of the flow of funds and the possible extent of any [personal] benefit.” But several indications of abuse of the accounts by veterans’ association executives stand out:

The report recommends a “thorough exercise … to trace and identify all possible investment[s]/interest[s] of the MKMVA. This would include any investment obtained by individuals [through MKMVA] for their own personal benefit.” A legal representative for the commissariat told the M&G that they were “closing an investigation and meeting with the authorities on Friday to hand over everything”.   MKMVA responds Maphatsoe, whose family trust received R128 250 from one of the association’s accounts, said that he and the executive members of the association, past and present, had taken “a group decision” not to answer questions about the forensic report or the court action. “Ask them [the commissariat] how many meetings we had with them to resolve this matter. Disciplined cadres do not go to the courts and to the media,” Maphatsoe said. The M&G’s attempts to contact Mathe and Motseki independently of Maphatsoe were unsuccessful. But Dlodlo said the commissariat had been “malicious” in commissioning an audit because it had “defied a resolution that the ANC treasurer general [Mathews Phosa] would conduct a full forensic investigation”. “We tried to do an investigation ourselves about two years ago, and asked a law firm to do it on contingency, but ultimately we did not have the money,” she said. Of the R40 000 she received from the account, Dlodlo said she had spent “a lot” of her own money at that time on an MK anniversary celebration. Khoza defended the cash and cheque withdrawals and said: “The organisation does not receive funds from the ANC, nor from any donor. Funds received are purely the initiatives of those tasked to run the organisation. There are no remunerations or salaries for office bearers. The business structures are created to bring participation by members directly into the businesses, individually or in groups.” He claimed that one of the accounts “was created to generate operational income to support office-bearers” and divulged its shareholding structure to the M&G. However, he did not explain why he and other office-bearers had personally received nearly R3‑million from the other account. A commissariat member, who asked to remain anonymous because the application is before court, said: “We tried through ANC procedures to address the issue, but after more than a year we concluded that this was not working. It was our last resort to go to court; we never wanted to. It is very unfortunate.” Motlanthe and Sisulu respond Thabo Masebe, speaking on behalf of Motlanthe and Sisulu, said that the two had “never served on any structures of the MKMVA”. Masebe said the commissariat had erred in citing them as trustees of the “MKMVA Trust” in court papers, but added that both Motlanthe and Sisulu had been trustees of the MKMV Trust, set up by Nelson Mandela in the 1990s. “The MKMV Trust had no link with the MKMVA,” Masebe said. “They should have taken care to establish where is this MKMVA Trust, who established it, and for what purpose. My information is that it was set up by Deacon Mathe … and the trustees were the office bearers of the MKMVA at the time,” he said. Responding to the comments, Mashinini said: “They mustn’t hide behind technicalities. The question posed to them is: Have they ever been trustees of any trust associated with the affairs of MK?” The commissariat failed in its bid last week to have a judge grant an urgent interdict in its favour. The application will be heard later this month.

Commissariat spokesperson Alex Mashinini believes one of its members, Vusi Pikoli, has paid the price for his association with the group. Pikoli was head of forensic services at Gobodo Inc when it merged with SizweNtsaluba in June last year. He told the Mail & Guardian last month that he had left because of pressure “from ANC people”. The M&G understands that Pikoli recused himself when the commissariat’s legal team raised his potential conflict of interest with SizweNtsalubaGobodo. Pikoli could not be reached for comment. A SizweNtsalubaGobodo spokesperson said that Pikoli’s departure was “a business decision” relating to the merger. – Lionel Faull and Pearlie Joubert

A distrust born of rivalry

The open war that has broken out between the Umkhonto weSizwe Military Veterans Association executive and the commissariat is seen as having its roots in struggle-era rivalries between two generations of soldier-exiles. A source said the enmity intensified as the returnees found themselves scrambling for the thin pickings available to them in government and in business. Association chair Kebby Maphatsoe, a “Young Lion” from the late-1980s generation sent to Uganda to train in the event that constitutional talks broke down, said that the commissariat “did not have a good history”. “Some were locked up, some mutinied, some abandoned the ANC,” he said, referring to the 1984 mutiny of MK units in Angola. He suggested that the Commissariat’s latest actions are further evidence that “they are not comrades, they are renegades”. The commissariat see things rather differently, however. They draw their numbers from the exiles who fled Soweto and other townships in 1976 to seek military training in neighbouring African countries. A senior commander who served in Angola, and was incarcerated in the ANC’s infamous Quatro prison camp, said the Soviet-style command structure of MK in exile created a corps of ideologically astute soldiers. “What we are trying to do is clean up our own act as veterans,” said the commander. — Lionel Faull * Got a tip-off for us about this story? Email [email protected]

The M&G Centre for Investigative Journalism, supported by M&G Media and the Open Society Foundation for South Africa, produced this story. All views are ours. See our funding sources here: www.amabhungane.co.za/page/sponsors.

Nelly Shamase
Nelly is a regular contributor to the Mail & Guardian.

Controversial SIU official back at work