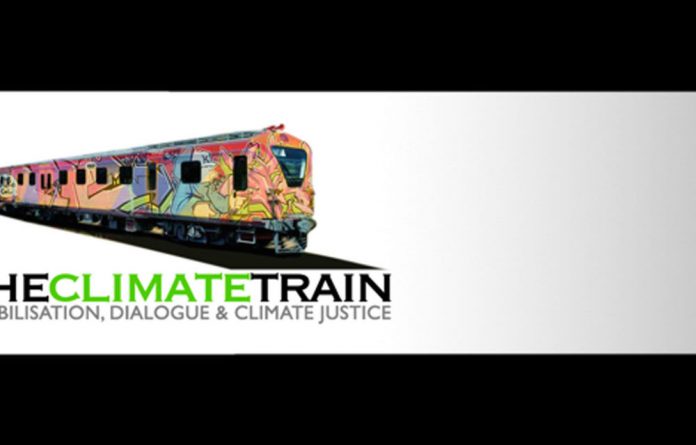 All in the lead-up to COP17’s climate change conference last year.

An initiative of Indalo Yethu, an implementation agency of the department of environmental affairs, the train stopped in more than 16 towns on its month-long journey. Its final destination was Durban where it remained accessible to the public for the duration of the conference

“The train was a vehicle and platform to facilitate a national conversation within towns and villages on the impact of climate change on communities and to give them an opportunity to tell their climate story,” said Hlobsile Manana, communications manager at Indalo Yethu.

The train hosted a number of experts in the environmental sector, including educators and artists, women’s, cultural and youth groups, learners and officials in far-flung towns. Activities on board included a wide range of discussions on climate change, art sessions, tree planting and theatre shows.

Each train carriage was transformed into an educational piece about an aspect of climate change. A number of art and literature projects encouraged kids to get involved and really think about climate change.

The train was part of Indalo Yethu’s ongoing programme to raise awareness and shift mindsets “to create an eco conscious society and a green economy”, Manana said.

The Greening judges praised the Climate Train project for reaching people whose lives might otherwise not have been touched by COP17. “The vision was good and many of the discussions succeeded in giving accessible, concrete form to the many technical issues involved in climate change,” they said.

Yasiin Bey, formerly known as Mos Def, says he came to live in Cape Town to spend some time to sort out his life and because SA is "crazy".
Read more
Advertising