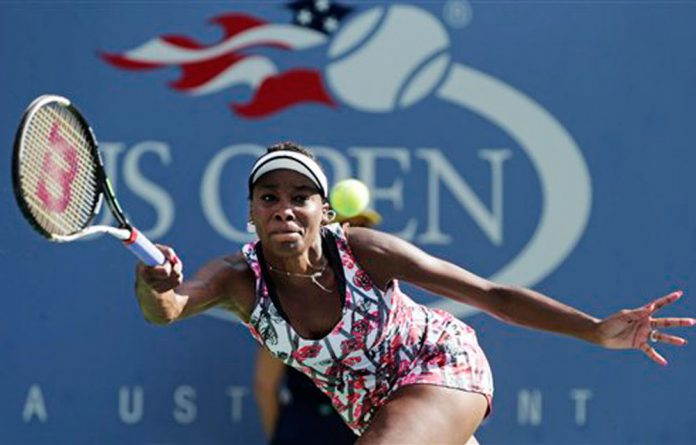 That Roddick's last match as a twentysomething would not be his last match at the 2012 US Open was hardly in doubt Tuesday, especially whenever he was launching that intimidating, tough-to-handle serve of his.

Now that he more frequently faces opponents who grew up cheering for him, Roddick knows more than ever he needs to rely on the best thing he's got, and 20 aces helped this time.

Heading into his Grand Slam debut, the 283rd-ranked Williams had one primary concern: "I was just hoping he wasn't going to go at me with a serve."

Title drought
That was the last Grand Slam singles title for an American man, the longest drought in history for a country that produced the likes of Pete Sampras, Andre Agassi, John McEnroe and Jimmy Connor, not to mention Bill Tilden or Don Budge.

Roddick found himself in an era dominated by Roger Federer and Rafael Nadal – and, more recently and to a lesser extent, Novak Djokovic, who began defence of his US Open title by overwhelming 69th-ranked Paolo Lorenzi of Italy 6-1, 6-0, 6-1 on Tuesday – and while he never added a second major championship to his resume, he kept adapting his game to try to do just that.

Venus returns to US Open
Following Roddick into Arthur Ashe Stadium was 32-year-old Venus Williams, playing her first US Open match since she pulled out before the second round in 2011 and revealed she'd been diagnosed with an autoimmune disease.

"Honestly, I didn't even understand what I was going through at that time last year. I feel like just this summer I've come to acceptance. Like it takes a long time to come to acceptance, especially when you're an athlete. You see yourself as this healthy person that nothing can defeat you," Venus Williams said. "So it takes a while before you can kind of see yourself as someone with flaws and chips in the armour. Now that I have come to accept it, it helps me a lot in how I need to prepare for my matches, the mindset I need to come into it."

After a shaky start, dropping the first two games – and even seven points in a row in one stretch – Venus Williams used her own powerful serve to right herself and beat Bethanie Mattek-Sands of the United States 6-3, 6-1. One serve at 200 kph jammed Mattek-Sands's left index finger, shoving it into a racket string so hard she needed attention from a trainer.

"She was crushing her serves," Mattek-Sands said. "I don't think anyone's returning those, so I'm not going to beat myself up too much."

Venus Williams won the 2000 and 2001 US Opens, two of her seven career Grand Slam titles. That's half as many as her younger sister, Serena, who began her bid for No. 15 in Tuesday's last match in Ashe, yet another all-American affair, against CoCo Vandeweghe.

Upsets
Three of the day's most notable upsets were turned in by young, up-and-coming Americans. In singles, 19-year-old Sloane Stephens, who is ranked 44th, eliminated 2010 French Open champion Francesca Schiavone 6-3, 6-4. And in doubles, 19-year-old Jack Sock and 22-year-old Steve Johnson knocked out the top-seeded team of Max Mirnyi of Belarus and Daniel Nestor of Canada 1-6, 7-6 (4), 6-2, while brothers Ryan and Christian Harrison defeated last year's runners-up, Mariusz Fyrstenberg and Marcin Matkowski of Poland 7-6 (3), 2-6, 7-6 (7).

Appearing in his 13th consecutive US Open – and wearing all-American sneakers for the occasion, replete with red and white stripes, and white stars on a blue background – Roddick sounded a willing to alter the expectations this time around. His own, and those of others.

Asked in an on-court interview what sort of present he would like in a couple of days, Roddick smiled and responded: "I just want to be around for next week. That's all I want for my birthday."After a pause, he added: "And then we'll renegotiate."

Next up for Roddick is a second-round match against 19-year-old Bernard Tomic of Australia, who at last year's Wimbledon became the tournament's youngest quarterfinalist since Boris Becker.

Roddick, a former No. 1 who is seeded 20th at Flushing Meadows, is coy when it comes to questions about how much longer he can compete at the top of the game.

Like Ryan Harrison, the 24-year-old Querrey is one of several younger Americans who have benefited from Roddick's advice and offers to train together in Austin, Texas.

Roddick extended that opportunity to Rhyne Williams after beating him Tuesday.

"He's kind of been the leader of American tennis amongst the guys for the last 10 years. He's been great. I mean, when I was 18, 19 – still to this day – he was always one of the first guys to invite me to Austin to practice," Querrey said. "He's always there for motivation. He's always there to tell you if you had a good win or to tell you, 'Hey, step it up', if you had a bad loss. He's really been a great mentor to everyone." – Sapa-AP

‘My goal is to win Wimbledon,’ says teen Gauff after Venus shock

Serena: ‘I am not a cheat’, accuses tennis of ‘sexism’