The latest storm in the social media tea cup has a small but vocal group of white South Africans foaming at the mouth over claims that Woolworths won't hire white staff.

Thankfully the episode had one saving grace: the humorous responses that emerged from the storm of righteous and sometimes comical outrage.

Self-described internet entrepreneur Justin Harrison drove the outcry from Friday using his blog and Twitter account to call on South Africans to boycott the retail chain over ads on its career site which stipulate its jobs are open to African, Coloured and Indian candidates only.

The ads now read: "In accordance with Woolworths' Employment Equity approach, preference will be given to candidates from designated groups."

Woolworths issued a factual if boring statement pointing out the obvious: that their staff included people of all races, and "like all South African companies, Woolworths has a role to play in transformation. For this reason, SOME positions [where there is under-representation] are designated for EE groups."

Unsurprisingly, the company's notoriously weak PR around the situation did little to dampen the indignation that boiled over on to Twitter and Facebook, with the attendant sound and fury that accompanies such outcries.

Someone even started a NoWorths page on Facebook, complete with mock ad banners carrying slogans like "Back from 1998. Does discrimination have a price?"

The sarcasm was returned by those amused at the outcry. We've rounded up the best of the lot for your viewing pleasure.

And our prize for the best Woolworths tweet this week goes to:

And if you didn't get that, you clearly don't know the Y U No guy. That's okay. We illustrated it, just for you. 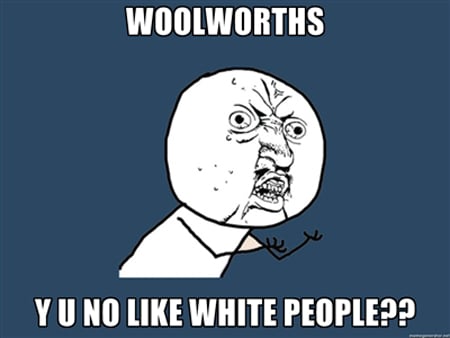 That's all for now folks … until the next social media outcry.