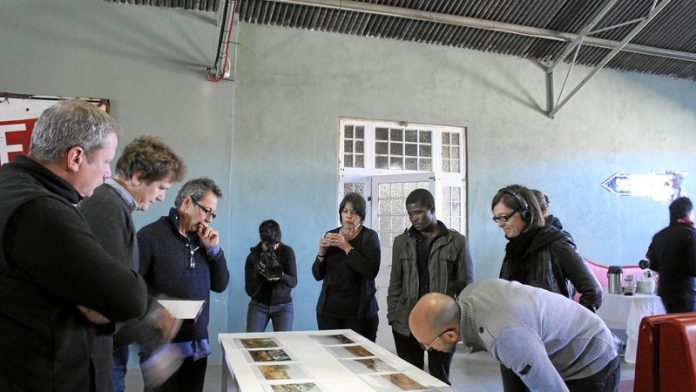 The project entails the coming together of South African and French photographers to look at areas in South Africa that have been the subject of historical, economic and social disturbances.

A meeting of minds between the 12 photographers involved in the project was held recently in a little place called Verkykerskop, just outside Harrismith in the Free State.

Not all the photographers have had landscape as a primary focus of their work. Muholi is well known for her portraits and her clear position as an activist for gay and lesbian rights. This project is an encouraging challenge to her oeuvre in that she will have to relay her work for it in the landscape genre.

Hugo, with his Hyena and Other Men series and his book Permanent Error, which contains images of a waste dumping ground in Ghana, has concentrated more on people within problematic landscapes than on the landscapes themselves.

His collaboration with Raphael Dallaporta, however, documenting the mine dumps outside Jo’burg promises to be an interesting partnership given their different styles; Dallaporta uses a drone to take aerial photographs while Hugo covers the dumps at ground level.

The result should be and was, from the initial presentation given at the Verkykerskop event, a revealing take on an integral part of the urban landscape.

The Magopa area in North West, just outside Marikana — a name that has been etched into the memory of many South Africans in recent weeks — is the area of focus for Thabiso Sekgala and Philippe Chancel. For this duo, the idea of home and what remains appears to be the preliminary subjects of inquiry. Chancel is an established photographer, whereas Sekgala is the youngest in the group. Apart from sharing a platform with some of South Africa’s greats for this project, Sekgala is included in the recently opened exhibition, Rise and Fall of Apartheid, curated by Okwui Enwezor, at the International Center for Photography in New York.

Ractliffe, like Mofokeng and Nunn, is a photographer at home with the demands of this project. Ractliffe’s unforgettable Life and Death in Angola series, about the scars that war etched on to that country’s landscape, comes to mind. Ractliffe believes that photography is like a form of activism, and that the social and political spaces of society must be documented.

Despite the noble intentions of the Social Landscape project, however, there were questions about representation at Verkykerskop: Were there enough women and weren’t there too many white men?

Apart from this, a consistent feature of the discussion was how the photographers grappled with the idea of what photography is and could be, in a social sense. The association between activism and documentary photography was often mentioned.

Photography for the most part is able to do what the more traditional art practices cannot, and that is to be immediate and responsive. The Social Landscape project mirrors this perfectly and arguably entails the importance of capturing the present reality as a source of archival reference for the future.

The work of all 12 photographers is scheduled to be curated and exhibited during November 2012 in Johannesburg as well as at the worldwide photography festival, Les Rencontres d’Arles, in the south of France in July-September 2013

"Black womxn professionals are at the bottom of this food chain. For me, my position has really helped me to take myself seriously in a world in which few people do."
Read more
Advertising
Continue to the category
Politics