Punching a hole in positivity 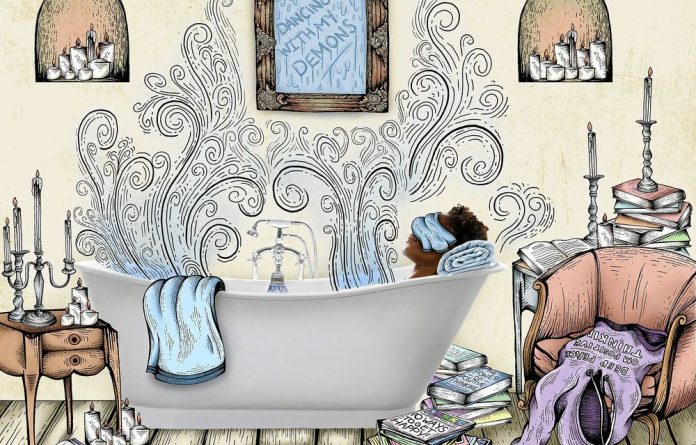 I know how to dance with my demons. Before I let them in, I set the mood right with Nina Simone and candlelight, sink into a hot bath and spend the next hour or two sunk neck-deep into sweet melancholia, sweat and tears mixed into one. I told this to a friend recently when she probed my passion for Miss Nina, as I prefer to call her. “She makes me want to slit my wrists,” she shot back, alarmed by my admission, and warned me against “getting comfortable with depression”.

I have never been depressed, not in a clinical sense, but like everyone I am often overtaken by bouts of insecurity that circle in my head and get comfortable enough in my heart to ensnare me in their icy grip.

In that moment I loathe nothing more than being told to “think positive”. Although I am myself a user, I have been a closet hater of this phrase for some time. It can be a callous, dismissive statement veiled as empathy, a prime example of the modern man and woman’s impatience at experiencing or being witness to emotional discomfort — our inability to engage with our personal truths.

So it was wickedly gratifying to come across an article that emboldened my suspicions on a larger scale, something that touches you and me and, more closely, the originators and chief marketers of the positive- thinking concept — those damn “have-a-good-day” Americans.

The Weakness of Positive Thinking, by David Collinson from the Lancaster University Management School in the United Kingdom, quotes a study that says too much positive leadership is a bad thing. And here is the clincher: it blames positive thinking as being at the centre of the “many miscalculations that drove the Great Recession”.

The study coins the term “Prozac leadership” and describes how “it promotes artificial happiness and discourages critical reflection, leaving companies ill-equipped to deal with setbacks”. The paper draws its conclusions from an analysis of nearly 200 studies. There is a bit of comforting news. The paper does agree that optimism is an important and effective skill for communication, but it guards against “excessive optimism”, “irrational exuberance” and, in the most deliciously apt phrasing, the “tyranny of positive thinking”. It is what I describe as thought that quietens down dissenting feedback. Collinson quotes several more studies in his article that highlight the price we pay in business and our personal lives for indulging in “delusional optimism”.

The optimism drug
When you read about Bernie Madoff, who pulled off the largest fraudulent financial scheme in history — at $65-billion — in the world’s financial capital with the recklessness of a two-bit street hustler, duping family, close friends and respected professionals, you wonder what kind of bubble people were living in for Madoff to get away with such a monumental crime. Whistle-blower Harry Markopolos, the man who spent eight-and-a-half years investigating Madoff, said his reports were ignored five times by the United States Securities and Exchange Commission. After the scandal broke, Markopolos penned the book No One Would Listen in trying to explain how so many were fooled for so long.

In the same way, we have come to silence ourselves in our personal lives. In our defence, it has been hard to do or think differently. As Collinson says: “… optimism tends to resemble a well-intended but addictive drug” and, having cottoned on to its financial might, newspapers and magazines are feeding it to us every day with a stream of headlines such as “10 ways to happy” or “Five things you can do right now to get happy” as a one-size-fits-all cure for every problem. It is a remedy administered in the US that we South Africans and others around the world are swallowing whole.

Type “positive thinking” in to Amazon and you get back more than 27 000 results, including books, CDs and T-shirts. Top of that list is the book that started it all — the bestselling The Power of Positive Thinking was released in 1952 by Norman Vincent Peale, who taught us to “… practice happy thinking every day. Cultivate the merry heart, develop the happiness habit and life will become a continual feast.” You can also pick up a $45 “deep peace om positive thinking” hooded sweatshirt inscribed with an Irish blessing, a “positive thinking subliminal” CD or “inspiration soft-padded toilet seat” with quotes on love, peace, joy and faith.

Positive thinking is a useful facet of motivational work, says the president of the Professional Speakers Association of Southern Africa, Adolph Kaestner, a personal development and business leadership expert based in Johannesburg.

“The dangers are in people relying on the motivational rah-rah speakers. The people who say jump up and down, hug your neighbour and then walk away. They leave people thinking if they do these one or two things they will feel ­better,” he says.

Positive thinking seems to thrive on shows of unbounded enthusiasm and I will admit to feeling guilty when I do not partake. No one wants to be the downer in the boardroom for pointing out the holes in an argument delivered with zeal. So, instead of tackling problems, we have chosen to anoint every spirited motivational speaker as an enlightenment guru and modern-day philosopher: from Tony Robbins and Deepak Chopra, who give the self-help field credibility, to Louise Hay, author of You Can Heal Your Life, loved by many and judged by others for claiming to have cured her cancer through positive thinking.

Kaestner, who has been in the business for 29 years, says he has great respect for Robbins. “I paid a lot of money to spend four days in Robbins’s workshops in London.” He thoroughly enjoyed them. “He is a bloody fantastic speaker. He teaches his audience well and gives them tools, which, if they practise, can help them overcome adversity.” But, Kaestner adds, he did not buy into Robbins’s neurolinguistic programming, which seeks to train the mind to block out negativity.

When The Secret by Rhonda Byrne was released in 2006, the positive-psychology message became too simplified and glamourised. The book and DVD — whose featured speakers lean heavily on how they got wealthy — reverberated globally, ­bolstered by celebrities such as Will Smith and Jim Carrey, and have made piles of money.

The Secret distills our whole life’s joys and sorrows into one “truth” — the law of attraction. We learn that those who send out bad thoughts get back grief. But you cannot just sit and hope for the best, says Kaestner. “I believe you need to identify the issue, find its source, work out how to fix it and then action those steps. Yes, you need to be positive, but mainly practical.”

What Kaestner and other experts believe is that a diet of positive affirmations will not suffice in the face of sorrow — no amount of positivity will haul you out of fresh grief, or your friend through the corrosive darkness of cancer treatment. And neither should it, ancient philosophy will tell you.

Personal demons
When, at the beginning of this year while living in the US, I found myself in a funk that I just could not shake, I dug a little bit deeper. For the first time I attended a day-long meditation retreat, which was led by US psychologist and Buddhist expert Tara Brach. I did not know it then, but that Saturday was a week before I was to board an aeroplane back to South Africa after learning of my sick father’s death the evening before. At that retreat I learned a lesson that both frightened and freed me. Brach talked about the concept of “inviting Mara (meaning “delusion” in Sanskrit) to tea”.

Even once Buddha had reached enlightenment and had become a revered figure, Mara, “the fearsome demon who symbolises the shadow side of human nature”, kept on making unexpected visits, Brach told us, as she sat erect the entire day, with her measured, unhurried voice our centre. Instead of chasing him away, she said, Buddha would offer Mara a cushion to sit on and “serve him as an honoured guest” tea.

More writers and thinkers are spreading this message. Oliver Burkeman’s The Antidote: Happiness For People Who Can’t Stand Positive Thinking, which explores “the upside of negativity”, will be out in November. Burkeman, a columnist for the Guardian, not only challenges the theory of the power of positive thinking, but also speaks to psychologists, philosophers and self-help types who advocate for a life that takes “a negative path to happiness”. This means “learning to enjoy uncertainty, embracing insecurity, stopping trying to think positively, becoming familiar with failure, even learning to value death … in short … we might actually need to be willing to experience more negative emotions — or at the very least, to learn to stop running quite so hard from them”.

If you are a die-hard positive thinker with a bookshelf groaning with covers of smiley faces and titles that promise to solve every ill — from your premenstrual syndrome to the Palestinian and Israeli crisis — through affirmations, this news might bring on a dark cloud. I am no guru, but I have a bit of what I think is good advice: get out your best cups and saucers and put a pot of tea on. That might be Mara knocking.