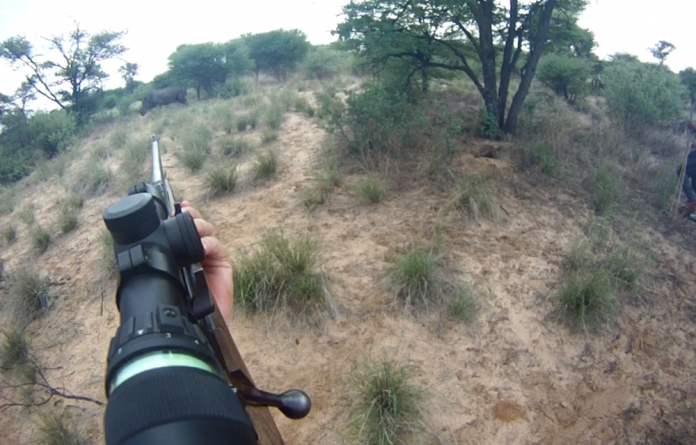 Captain Paul Ramoloka said the Hawks in partnership with the task force received information about the alleged poachers who were spotted near the Sabi Sand private game reserve in Skukuza at around 2pm.

"When our team confronted the four men, they opened fire on the police who returned fire. One of the poachers was killed, another is in hospital while the other two were arrested," he said.

Ramoloka said the three men would be charged with attempted murder and being in possession of dangerous weapons.

"We are still trying to link the suspects with some of the rhino poaching which have taken place in the KNP (Kruger National Park) over the past week."

According to SA National Parks (SANParks) the country had lost 528 rhinos since the beginning of 2012 and 320 of them were killed in the KNP.

Law enforcement agencies dealt a blow to a global smuggling ring on Friday, when a Thai national was sentenced to 40 years for smuggling rhino horn.

It was expected that Chumlong Lemtongthai would receive no more than 10 years in jail. But, days after Environmental Affairs Minister Edna Molewa had called for a strict sentence to be imposed against him, Lemgtongthai was sentenced to 40 years in prison.

His fellow accused did not share his fate though. Professional hunter Harry Claassens turned state's witness and charges were withdrawn against five other men involved in the poaching operation, including a farmer, two farm workers, and two other Thai men.

Last week, Lemtongthai pleaded guilty to smuggling rhino horn and admitted to using Thai prostitutes to pose as hunters in order to secure hunting. His group is believed to have facilitated the illegal export of 26 rhino horns from the country.

Phindi Louw, South Gauteng regional spokesperson for the NPA, said the NPA felt the sentence was appropriate and would send a strong message that South Africa "will do everything in its power to preserve our heritage".

Louw said that the charges against the five co-accused were withdrawn because of insufficient evidence. "As the NPA, we have a duty to prove a case beyond reasonable doubt in a court of law," she said.

"Going forward we will have to find ways, as the NPA and the justice cluster, to ensure that we have water tight cases whereby we are able to ensure successful prosecutions."

Lemtongthai is a key figure in the so-called Xaysavang syndicate, an international wildlife outfit headquartered in Laos. He was arrested in 2012 by customs officials and the Hawks, a day before he was set to leave the country.

"It sets a very strong legal precedent for possible future prosecutions of this nature and also indicates the seriousness with which the courts interpret and implement legislation … to protect our natural resoruces, in particular rhinos," he said.

Lackey said that financial investigations into one of the accused is ongoing from Sars, and may later form the basis for further litigation.

The investigation had required the Hawks, Sars customs officials, the department of environmental affairs, Sanparks and the NPA to work together closely to find and present credible evidence before the courts, he said, paving the way for future collaborations.

Investigative journalist Julian Rademeyer, who recently authored the book Killing for Profit: Exposing the illegal rhino horn trade, said the sentencing was significant as it would disrupt the activity of the syndicate that Lemtongthai is part of. Lemtongthai is the most senior figure in rhino horn trading ever convicted and sentenced in South African.

"This is a syndicate with tentacles that reach Thailand, Laos and Vietnam," he said. "It will certainly have a disruptive effect."

However, he added, it was only a matter of time before the syndicate finds other ways of getting their hands on rhino horn.

The WWF applauded the work of law enforcement officials in security the arrest and conviction but said it was concerned that the charges against Lemtongthai's co-accused had been withdrawn without explanation.

"Sadly, this does not send a similarly strong message regarding South Africa's attitude to the ongoing involvement of its own citizens in rhino crimes," it said in a statement.

Dr Jo Shaw, rhino coordinator for WWF-SA, said the organisation hoped that the charges against the other men would be reinstated.

Chumlong Lemtongthai was released from the Kgosi Mamparu 11 facility on Tuesday, after serving just under six years of his jail sentence
Read more
Africa