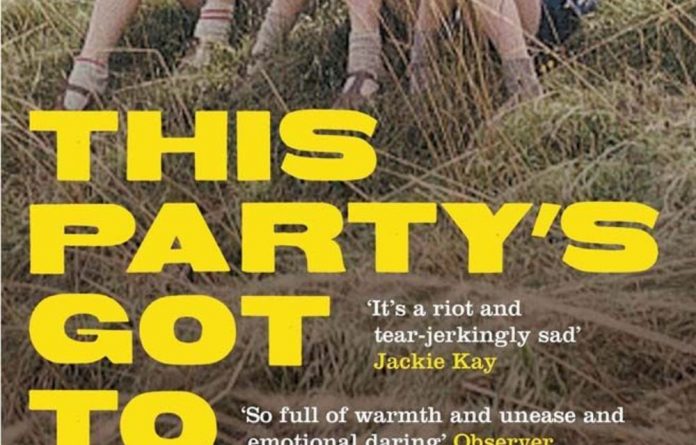 THIS PARTY'S GOT TO STOP by Rupert Thomson (Granta)

There are people, apparently, who read — and complete — whole books in book stores. At every opportunity they get they go into a bookshop and, under the guise of browsing, choose a quiet corner and read chapter after chapter until the last page of the book.

One day, some time in 2010, finding the office suffocating, I walked to a branch of Exclusive Books in the Rosebank Mall in Johannesburg. I wandered to the shelf where they stock literary magazines and related books.

On the shelf was an issue of Granta (107) that featured writers and poets of whose work I am aware: Rana Dasgupta, Will Self, Mahmoud Darwish, Terrence Holt and Javier Marias. There was someone else, Rupert Thomson, a Briton, whom I did not know. His piece, titled Call Me By My Proper Name, had been excerpted from his forthcoming memoir, This Party's Got To Stop.

Instead of reading the piece by the Spanish master Marias, whose short story collection When I Was Mortal I had just bought for R30 at a second-hand bookshop, it was the work of the stranger in which I was soon engrossed.

Thomson's moving excerpt began: "My mother's brother was christened Cedric, but people always called him Joe. As a child, I don't remember seeing Uncle Joe, not even once."

It touched something in me. Could it be because Cedric reminded me of one of my uncles, Edward, an enigmatic, eccentric and yet loving character whose life — and death — no one in the family, not even his siblings, could quite work out?

"In his early twenties, [Cedric] was offered a job by the London Bank of South America. He flew to Colombia. Within a few months of landing in Bogota, he moved out of the approved lodgings for single employees and registered in a hotel under an assumed identity. He had sex with local women. He grew a beard. The bank transferred him to a less prestigious branch in Ecuador."

"When Joe landed in Colombia [from Britain] to take up his job with the London Bank of South America, he had felt, he said [in a letter], 'like someone who'd been away for a long time and had finally come back'."

Astonished by what he was reading, Thomson put the letter down to contemplate his own life. "I had felt exactly the same way when I arrived in Italy in 1982. I had given up everything — my job, my flat — and I was going to write." [In a conversation with his father, he told him he had left his job in advertising because "I was making too much money"].

"After driving through France, I spent the night in a small white hotel on a rocky promontory a few miles west of Cannes — a miracle that it was open; everywhere else had closed for winter — and when I had crossed the border at Ventimiglia the next morning, my heart seemed to expand.

"I hadn't expected such a rush of happiness. The empty autostrada, the glitter of the Mediterranean off to the right and far below. My first Italian service station, where I stood at a zinc counter and drank cappuccino. It felt like a homecoming. Home isn't the place you grow up in, or the place where your parents live. Home is a place you come across by chance, if you're lucky."

Because I have rather elastic notions about home and homelands, I paused to read that last sentence again. In a while I had read the whole piece, 20 or so pages, and then went back to the office.

Over the next few months I would go to the bookshop to read the piece several times, always in that shop, furtively and conspiratorially in some corner, until I bought a used copy many months later at a branch of Bookdealers in Bedfordview. Bookdealers is a small chain of stores that specialises in remaindered and second-hand books.

I have sometimes wondered why I never bothered to look up Thomson or order the book itself. Normally when I encounter writers whose work I am not aware of, I look them up on the internet. I am usually interested in the lives of the writers whose works I have read and love.

In all those months that I meditatively read his Granta piece I did not try to find out who Thomson was. I guess ignorance about this author with whom I was obviously fascinated and the incomplete narrative about his life and his tragically riven family, which so resembled my mother's, had a certain allure.

The sheen must have worn off at some point, because in August or perhaps September this year I googled him and was directed to yet another excerpt, this time in the Guardian.

I read it and made a mental note to order the book from an online shop.

And then one day last month I happened to be in IH Pentz's ­Booksellers, a second-hand bookshop in Braamfontein, where I was perusing a huge pile of new stock. I think I must have seen Thomson's book because, abruptly and for no discernible reason, I was thinking about Thomson and his uncle Cedric. (What was happening, one could say, is a strange form of what I want to call biblio-premonition. This happens in other ways: sometimes I find myself, a few minutes before I meet someone, suddenly thinking of them and then, voilà! there they are).

But, finding nothing of interest in the stack, I went to another section of the bookshop and browsed for 30 or so minutes before returning to the pile of new books.

The name "Rupert Thomson" was on my mind and a book, This Party's Got to Stop, written by one Rupert Thomson, was placidly sitting there. Surprised and ecstatic, I extricated it from its heavy load and went to the counter. "One hundred rand," the shop assistant said.

By the time I went to bed I had read most of This Party's Got To Stop. It is at once a bizarre and engaging, meditative and redemptive tale about the author's dysfunctional family. I am tempted to use words such as dystopia and apocalypse, but perhaps dysfunctional will do.

It is written in the way one would pen a novel and begins on a ghostly tip: "My mother spoke to me once after she was dead. Nine years old, I was standing outside our house, in the shadow of a yew tree, when I heard her call my name."

The book's sombre atmosphere wafts into the second chapter, titled "Sorry if I Look Strange", in which the writer's father, an invalid, dies. Thomson's "sense of isolation is so immediate and profound that it registers as a drop in temperature [and he begins] to shake with cold". Thomson was his father's eldest son. Being an eldest child is an accident of birth that comes with honour and responsibility. When his father was in hospital, he had not called him. "I could have told him I loved him. But now, all of a sudden, it's too late."

The third instalment in the book is, yes, the chapter on his uncle Cedric, titled "Call Me by My Proper Name". You would think that I would skip it and rush to what I had not read. But, no, I read it again, for the umpteenth time.

A fascinating chapter in the memoir is when the three brothers — Rupert, Ralph and Robin — go to the lawyer entrusted with executing their father's will (they were on speaking terms then, before Ralph cut himself off from his older brothers for close to 20 years).

"These are my wishes regarding certain of my effects and possessions in the event of my death. I desire that Rupert, Robin and Ralph together shall deal with my property with no others present, no parasites, no hangers-on or layabouts," read the letter from the dead.

A few weeks ago, while killing time as I waited for a friend, I wandered into a branch of Exclusive Books in Mandela Square. I found myself in a section of the bookshop I had never been to. To my delight, I saw a few of Thomson's novels. I think there were Dreams of Leaving, Air and Fire and The Five Gates of Hell. The Christmas partying has to stop; I intend to read Rupert ­Thomson over the holidays.