Champion tree at Wits is over 100 years old 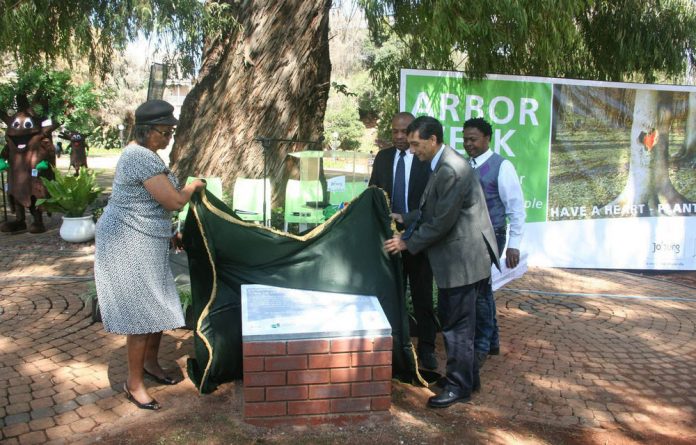 Johannesburg's reputation as the biggest man-made forest in the world precedes it; with over 10 million trees throughout the city, it comes as no surprise that it holds this title.

As a way of ushering in Arbor Week, which ran from September 1 to 7, City Parks celebrated the presence of the eucalyptus tree on the lawns of the University of the Witwatersrand West Campus.

This eucalyptus has gained acclaim, as it was named a champion tree by the department of agriculture, forestry and fisheries in March 2010.

The academic deputy vice-chancellor of Wits, Professor Yunus Ballim, said: "This is a very special tree. It is believed to be the oldest in Joburg, at over 100 years old. It is 44 metres tall with a canopy 38,7 metres wide."

"This tree watched over historical events, such as the miners' strike in 1922. It has patiently watched over human folly, so it is fitting to mark Arbor Week under a tree that has seen all of that."

Johannesburg was well-known for being the most densely treed, man-made forest on the planet, but this statistic favoured the more affluent northern suburbs of the city.

Arbor Week was a green call to action to schools, communities, business, government and the media to get involved in tree-planting activities and to highlight the plight of the street trees in a fast growing urban environment, like Joburg.

The Joburg 2040 vision is to transform dust-riddled sidewalks to canopies of tree-lined streets.

Trees serve as a way of preserving our past and advancing our future. In line with the greening entities mandate of managing the city's parks, cemeteries, open green areas, conserved spaces and street trees to resolve historical environmental imbalances between Joburg's north and south.

The challenge to the gatekeepers of the city's green lungs is to claim our space to cope with the environmental pressures of the 21st century, as a collective.

The three entries submitted to the Liveable Communities Awards for 2012, included the rollout of the Pimville and Claremont Xtreme-Parks, developed in under 24 hours; the Dhlamini Eco-Park that embraces the ecosystem along the Klipriver; and the Community of Parks project that interrogates the heritage, arts, culture, biodiversity, functional requirements and recreational needs of communities benefiting from the Orlando West, Pennyville, Clove, Zakariyya and Vlakfontein parks.

The member of the mayoral committee for community development, Chris Vondo, reinforced that these platforms are crucial in exchanging best practice and sharing practical experiences to resolve environmental challenges.

He said: "The Johannesburg City Parks team must be commended for modernising and driving the revival of outdoor recreation in the City of Joburg to benefit its residents."

Founder and chief executive of LivCom, Alan Smith, said: "There is strong evidence that it is local government and local communities where – despite the world's economic problems – solutions are being found to improve living standards from healthy lifestyles to enhancement of the landscape, a major benchmark of the awards.

"These awards are a unique way of recognising the outstanding efforts being made by individuals committed to finding innovative answers to their communities' problems.

A total of 60 towns and cities submitted entries, including cities in the US, UK, Malaysia, Russia, Canada, China and Portugal.

In addition, 66 sustainable projects and 26 bursary award applications reached the finals after an initial round of judging.