Deputy President Kgalema Motlanthe's decision to challenge President Jacob Zuma has angered the president's backers, who have vowed to persuade the branches to defeat and humiliate him.

The Mangaung conference takes place amid uncertainty about economic policy direction, the looming national elections in 2014 and the need for the party to assess whether its performance has improved since it unceremoniously removed Thabo Mbeki as ANC president in Polokwane five years ago.

Zuma is facing pressure over the building of a R250-million "security upgrade" on his home in Nkandla.

Although Motlanthe has consistently indicated that he would stand if the branches nominated him, Zuma lobbyists had peddled the line that he would eventually be persuaded not to stand and a divisive leadership contest would be avoided.

All manner of carrots have been dangled before him to persuade him to change his mind, but Motlanthe refused to budge, even after ANC provincial general meetings showed that he would lose. 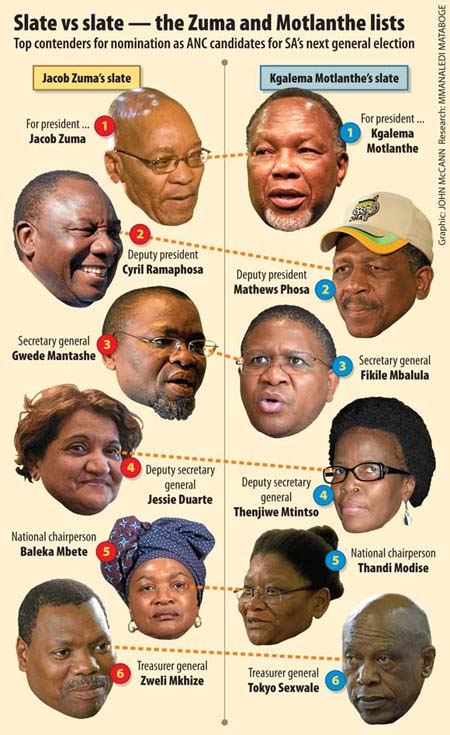 Motlanthe is standing for the positions of president, deputy president and for the party's national executive committee.

Relations between Zuma and Motlanthe have reached the lowest point to date and Zuma is believed to be so incensed with his deputy that he no longer wants to work with him.

Sharp disagreements
Sources in the presidency and the ANC told the Mail & Guardian this week that relations between Zuma and Motlanthe had not been healthy for the past few months.

The pair have had sharp disagreements, particularly on the handling of the ANC Youth League disciplinary case that resulted in the expulsion of its president, Julius Malema, and the suspension of secretary ­general Sindiso Magaqa and spokesperson Floyd Shivambu. The two leaders also clashed publicly over the concept of the "second transition".

Last week, in an interview with the London-based Daily Telegraph, Zuma intimated that he would prefer to work with ANC national executive committee member Cyril Ramaphosa. Asked about the prospect of Ramaphosa becoming his deputy, Zuma reportedly praised the former National Union of Mineworkers (NUM) general secretary-turned-tycoon. "It would not be the first time I worked with Cyril Ramaphosa. When he was the secretary general I was his deputy. So it would not be the first time, if he is elected," Zuma said. At the time of going to press, Ramaphosa had not indicated whether he would accept the nomination.

However, Ramaphosa has confided to allies in the past that he would only stand for the position if Motlanthe, his predecessor at the NUM, declined. Other nominees for the deputy president position include ANC treasurer general Mathews Phosa and Human Settlements Minister Tokyo Sexwale, who have both accepted.

A Cabinet minister said on Thursday that senior party leaders were shocked to learn that Motlanthe had accepted the nomination. These leaders, according to the minister, had expected Motlanthe to decline to challenge Zuma and to agree to a unity plan that would have seen the president re-elected without contest.

"People are shocked and they are asking themselves: Where does he [Motlanthe] get the guts to challenge JZ? They see it more as an attempt to tear the ANC apart. Our initial agreement was let us not divide the movement at the congress. It has disappointed a lot of people.

"The shock has become anger now. The anger and frustration was written all over people's faces at Luthuli House. They are saying: What makes him think he can stand against Zuma and win? Who is behind his decision to challenge Zuma? Is he being sponsored? We don't have answers, but we believe that the branches will show him [who they want as ANC president]," the minister said.

Political observers have described his acceptance of nominations for two positions and a place on the national executive committee as an attempt on his part to repudiate the culture of electing leaders through slates and "arrangements".

A Motlanthe lobbyist described the deputy president's relationship with Zuma as "extremely tense, precarious and pretentious. They avoid each other; it's a real cold war. They occasionally engage pretentiously [sic]. It's that bad."

Tension between the two apparently began when Motlanthe held the state presidency for seven months following Mbeki's sacking. "[They were] relatively close, but [the Zuma-supporting ANC leaders] harassed Mkhuluwa [Motlanthe] when he was acting president due to paranoia," the lobbyist said.

The ANC conference, which starts on Sunday in Bloemfontein, is likely to lay bare the deep divisions in the ruling party as supporters of Zuma and Motlanthe prepare to influence leadership and policy outcomes.

The ANC's process to nominate leaders has been marred by infighting, acts of intimidation and allegations of vote rigging and accreditation of "ghost" delegates as both factions fought to win at all costs.

Three provinces – North West, the Free State and Eastern Cape – have threatened to interdict provincial delegations from attending the conference. Motlanthe's supporters in these provinces have accused provincial leaders sympathetic to Zuma and ANC secretary general Gwede Mantashe of deliberately excluding legitimate delegates who supported the call for leadership change.

Poverty and inequality
The battle for the heart and soul of the ANC will also be fought over key policy issues such as the nationalisation of mines and other key sectors of the economy.

Business, labour and foreign investors will be watching the debates very closely. South Africa has been downgraded by ratings agencies twice this year, owing mainly to uncertainty over economic policies and illegal strikes in the mining and farming industries. Nationalists and left-leaning alliance leaders differ sharply on the policy direction the party needs to follow in the light of rising unemployment, poverty and inequality. This is cited as the reason why the ANC has largely failed to implement the 2007 Polokwane resolutions on economic transformation.

These "were premised on the need to attain all Freedom Charter objectives and further said that the ANC should manage the mineral sector in a manner that benefits all people and not for profit maximisation", an ANC leader said. "Nothing was done in that regard. Generally, the ANC has been directionless."

Although Zuma's administration has been praised for developing the new growth path, the industrial policy action plan and the national development plan, ideological differences and bickering among ministers and senior government officials have derailed the implementation of the policies, which were meant to create millions of jobs in the country.

Nationalisation is expected to top the agenda at the five-day conference. The ANC Youth League and some Cosatu affiliates will be lobbying hard for the adoption of wholesale nationalisation, whereas Zuma and other centrists such as Planning Minister Trevor Manuel are expected to oppose it.

Although outright nationalisation was rejected by the state intervention in the minerals sector (Sims) report commissioned by the ANC, some in the party are determined to force it back on the conference agenda.

With the youth league neutralised after the expulsion of Malema, opponents of nationalisation are likely to get the upper hand in Mangaung. With that, the proposed implementation of sweeping new tax measures to boost state coffers will be central to the debate. Recommendations from the June policy conference rejected wholesale nationalisation, but suggested ways of ensuring the state benefits from the proceeds of mining. Among other things, the Sims report recommended a 50% "supertax" on mining profits.

Meanwhile, senior ANC figures critical of Zuma are warning party colleagues that a win for Zuma will further erode ANC support during the 2014 national elections. However, Zuma's supporters believe that Ramaphosa's election as deputy president could boost the ANC's credibility and increase its majority at the polls. They also believe the ANC will eventually unite around Zuma.