NRA pushes for armed officers in all American schools 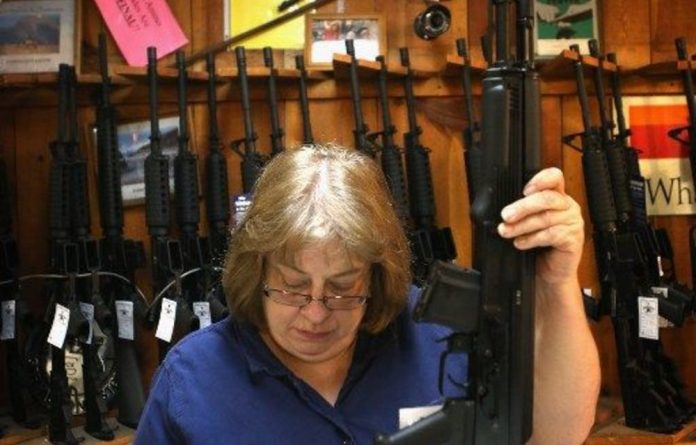 This no-retreat position is intended to stop the next killer "waiting in the wings."

Wayne LaPierre, the group's CEO, took the defiant stance in a speech Friday amid growing calls for gun control after the Connecticut school massacre that claimed the lives of 26 children and school staff.

Some members of Congress who had long scoffed at gun-control proposals have begun to suggest some concessions could be made, and a fierce debate over legislation seems likely next month. President Barack Obama has demanded "real action, right now."

That has left the largest U.S. gun-rights lobby on the defensive. It broke its weeklong silence on the shooting rampage at Sandy Hook Elementary School in a Friday event billed as a news conference, but with no questions.

Twice, it was interrupted by banner-waving protesters, who were removed by security. "The only thing that stops a bad guy with a gun is a good guy with a gun," said Wayne LaPierre, the group's chief executive officer.

Some had predicted that after the slaughter of so many elementary-school children by a man using a semi-automatic rifle, the group might soften its stance, at least slightly. Instead, LaPierre delivered a 25-minute tirade against the notion that another gun law would stop killings in a culture where children are exposed daily to violence in video games, movies and music videos. He argued that guns are the solution, not the problem.

Fighting guns with guns
"Before Congress reconvenes, before we engage in any lengthy debate over legislation, regulation or anything else; as soon as our kids return to school after the holiday break, we need to have every single school in America immediately deploy a protection program proven to work," LaPierre said.

"And by that I mean armed security." New York City Mayor Michael Bloomberg said the NRA is blaming everyone but itself for a national gun crisis and is offering "a paranoid, dystopian vision of a more dangerous and violent America where everyone is armed and no place is safe." LaPierre said Congress should immediately appropriate funds to post an armed police officer in every school.

Meanwhile, he said the NRA would develop a school emergency response program that would include volunteers from the group's 4.3 million members to help guard children. His armed-officers idea was immediately lambasted by gun control advocates, and not even the NRA's point man on the effort seemed willing to go so far.

Former Republican Representative Asa Hutchinson of Arkansas, whom LaPierre named national director of the program, said in an interview that decisions about armed guards in schools should be made by local districts.

"I think everyone recognizes that an armed presence in schools is sometimes appropriate," Hutchinson said. "That is one option. I would never want to have a mandatory requirement for every school district to have that."

He also noted that some states would have to change their laws to allow armed guards at schools. Hutchinson said he'll offer a plan in January that will consider other measures such as biometric entry points, patrols and consideration of school layouts to protect security.

LaPierre argued that guards need to be in place quickly because "the next Adam Lanza," the suspected shooter in Newtown, Connecticut, is already planning an attack on another school.

Gun rights
"How many more copycats are waiting in the wings for their moment of fame from a national media machine that rewards them with wall-to-wall attention and a sense of identity that they crave, while provoking others to try to make their mark?" LaPierre asked.

"A dozen more killers, a hundred more? How can we possibly even guess how many, given our nation's refusal to create an active national database of the mentally ill?"

While there is a federally maintained database of the mentally ill -people so declared by their states – a 1997 Supreme Court ruling that states can't be required to contribute information has left significant gaps. In any case, creation of a mandatory national database probably would have had little impact on the ability of suspected shooters in four mass shootings since 2011 to get and use powerful weapons.

The other people accused either stole the weapons used in the attacks or had not been ruled by courts to be "mentally defective" before the shootings.

Democratic Rep. Jerrold Nadler of New York called the NRA's response "both ludicrous and insulting" and pointed out that armed personnel at Columbine High School in Colorado and the Fort Hood Army post in Texas could not stop mass shootings.

The liberal group CREDO, which organized an anti-NRA protest outside Congress, called LaPierre's speech "bizarre and quite frankly paranoid." "This must be a wake-up call even to the NRA's own members that the NRA's Washington lobbyists need to stand down and let Congress pass sensible gun control laws now," CREDO political director Becky Bond said in a statement.

Outrage
The NRA's proposal would be unworkable given the huge numbers of officers needed, said the president of the International Association of Chiefs of Police, Craig Steckler. He pointed to budget cuts and hiring freezes and noted that in his hometown of Fremont, California, it would take half the city's police force to post one officer at each of the city's 43 schools.

The Department of Education has counted 98,817 public schools in the United States and an additional 33,366 private schools.

There already are an estimated 10,000 school resource officers, most of them armed and employed by local police departments, in U.S. schools, according to Mo Canady, executive director of the National Association of School Resource Officers.

Gun rights advocates on Capitol Hill had no immediate comment. They will have to walk a tough road between pressure from the powerful NRA, backed by an army of passionate supporters, and outrage over the Sandy Hook deaths that has already swayed some in Congress to adjust their public views.

A CNN/ORC poll taken this week found 52%of Americans favor major restrictions on guns or making all guns illegal.

46% of people questioned said government and society can take action to prevent future gun violence, up 13 percentage points from two years ago in the wake of the shooting in Tucson, Arizona, that killed six and wounded then Representative Gabrielle Giffords.

Obama demands action
Since the Connecticut slayings, Obama has demanded action against US gun violence and has called on the NRA to join the effort.

Moving quickly after several congressional gun-rights supporters said they would consider new legislation to control firearms, the president said this week he wants proposals that he can take to Congress next month.

Obama has already asked Congress to reinstate an assault weapons ban that expired in 2004 and to pass legislation that would stop people from purchasing firearms from private sellers without background checks.

Clinton signed such a ban into law in 1994, but it expired after 10 years. Feinstein said she's not opposed to having armed guards at schools, but she called the NRA proposal a distraction from what she said was the real problem: "easy access to these killing machines" that are far "more powerful and lethal" than the guns that were banned under the old law. — Sapa-AP