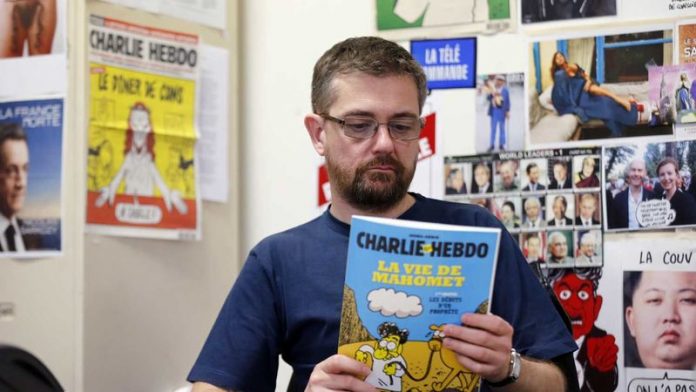 The editor of Charlie Hebdo weekly has insisted that the new book, titled The Life of Muhammad, is a properly researched and educational work prepared by a Franco-Tunisian sociologist.

"It is a biography authorised by Islam since it was edited by Muslims," said Stephane Charbonnier, editor and also the illustrator of the book, whose front page shows the prophet leading a camel through the desert.

"I don't think higher Muslim minds could find anything inappropriate," Charbonnier, whose magazine has repeatedly enraged some Muslims with satirical depictions of the prophet, told AFP last week.

He said the idea for the comic book came to him in 2006 when a newspaper in Denmark published cartoons of Muhammad, later republished by Charlie Hebdo, that sparked angry protests across the Muslim world.

"Before having a laugh about a character, it's better to know him. As much as we know about the life of Jesus, we know nothing about Muhammad," he said.

There was little initial reaction on Wednesday to the new comic book, which retails at €6 .

But on Monday a senior political advisor to Turkish Prime Minister Recep Tayyip Erdogan denounced the work as a deliberate provocation.

"To transform the life of the prophet of Islam into a cartoon is in itself a mistake," Ibrahim Kalin wrote on his Twitter account. "Whatever the people at Charlie Hebdo say, this is a provocation."

Charlie Hebdo has on several occasions published cartoon versions of Islam's prophet in a declared effort to defend free speech, to the fury of many Muslims who believe depicting Muhammad is sacrilegious.

In September it published cartoons of a naked Muhammad as violent protests were taking place in several countries over a low-budget film made in the United States that insults the prophet.

In 2011, Charlie Hebdo's offices were hit by a firebomb and its website pirated after publishing an edition titled Charia Hebdo featuring several Muhammad cartoons.

​UCT’s Max Price was right to disinvite Flemming Rose, but he insulted students

‘I’ve no idea who they are; they’re dead and in the street’

MJC: Freedom of speech should not lead to hate speech