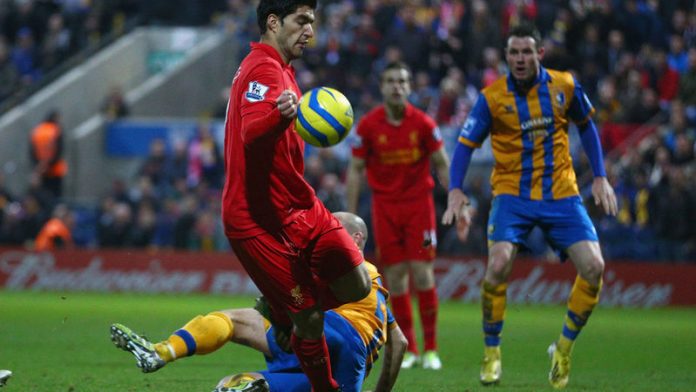 The Uruguayan international – no stranger to controversy since his arrival in England in January 2011 – handled the ball before poking it into the net to give the visitors a 2-0 lead with just over half an hour to go.

The hosts' leading scorer Matt Green ensured an exciting finish with a 79th-minute strike on Sunday.

Daniel Sturridge had opened the scoring seven minutes into his first outing following his £12-million move from European champions Chelsea.

Liverpool were made to work hard for their win despite the 18-time English champions playing a side that was relegated from the Football League in 2008 and still struggling to get back out of the Conference National.

Reds manager Brendan Rodgers made eight changes, with only Stewart Downing, Lucas Leiva and Andre Wisdom keeping their places from the side that beat Sunderland 3-0 at Anfield on Wednesday.

Hole in the roof
Mansfield manager Paul Cox was marking his 41st birthday, having tied the knot with his fiancée two days earlier.

Rodgers took his place on the bench in front of the condemned Bishop Street Stand, the hole in its roof – so cherished by home fans they even sponsor it – covered by a temporary television gantry.

Getting off to a settled start, Liverpool moved up the pitch and soon carved Mansfield open.

Sturridge could not have wished for a simpler chance to start his Liverpool career, the ball played expertly through the Stags' defence by Jonjo Shelvey for the new signing to clip past goalkeeper Alan Marriott.

He could have had another a minute later, but Marriott rushed out to smother the ball.

In the 15th minute, Shelvey played in Sturridge again but with too much time on his hands, he hesitated and Marriott pulled of an excellent save.

First chance
The Stags had their first shot in the 33rd minute when Green cracked a strike from outside the penalty box that Brad Jones did well to keep out.

Mansfield started the second half firing on all cylinders.

Anthony Howell had a close-range shot on the turn that Lucas blocked, before Louis Briscoe had a thumping drive at Jones that the Liverpool goalkeeper could only stop with his fists.

The Stags had a quick succession of corners and Briscoe fired in a thunderous shot that Jones did well to parry. He punched clear again in the goalmouth scramble from the resulting corner.

Nine minutes into the second half, Rodgers brought on the Premier League's second-top scorer Suarez and Jordan Henderson for Sturridge and Suso.

Within five minutes, the Uruguay striker had the ball in the net, though it clearly hit his hand as he bundled in a rebound off Marriott.

Green ensured a roller-coaster finish when Lee Beevers brought down a high ball and centred it for the striker to blast beyond Jones, sending home fans into raptures.

But the Reds survived a frantic final 10 minutes to set up a trip to third-tier strugglers Oldham Athletic in the fourth round on January 26 or 27. – AFP