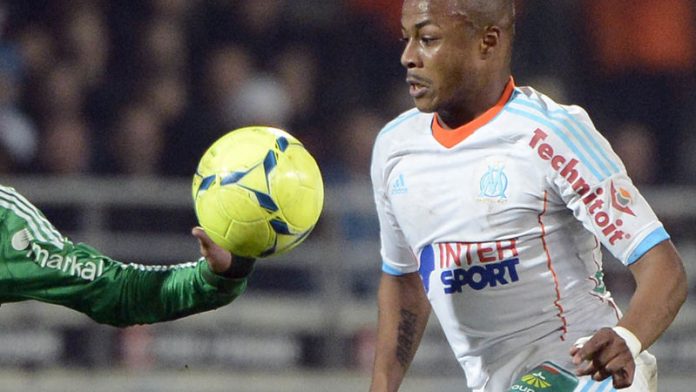 Ghana's coach Kwesi Appiah said in a statement on Monday he had decided "to work only with the players currently in camp" and Ayew wouldn't be considered for the final 23-man squad because of uncertainty over the extent of the hamstring injury he sustained with his French club.

Appiah wanted Ayew – the 23-year-old Marseille winger and one of the country's best players – to report to the pre-tournament camp in United Arab Emirates by Saturday to see Ghana's medical team.

He was then given an extended deadline to arrive by Monday.

Ghana's coach said the player had still not reported to the camp in Abu Dhabi by Monday morning and would now not arrive in time to have his fitness assessed before Wednesday's deadline for African Cup squads to be named for the January 19 to February 10 tournament in South Africa.

"Unfortunately, André failed to report to camp and indicated that owing to the treatment he was receiving from his doctor he would report to camp on Wednesday," Appiah said. "In line with my vision of taking only fit players for the Africa Cup of Nations, I have decided … to work only with the players currently in camp."

Future matches
Appiah said he had "personally explained the rationale behind the decision to André" and "will continue to count on him in future matches if he is fit."

There was no immediate reaction from the player.

Ayew was Ghana's player of the year for 2011 and is the son of Abedi Pele, one of the West African nation's greatest and most respected players.

Appiah said he was told on the weekend that Ayew could not leave France despite being released by his club to meet the Saturday deadline set down by world body Fifa for internationals to join up with their national teams ahead of the Cup of Nations.

"All the players were given the deadline of Saturday to report to camp in Abu Dhabi," Appiah said in his written statement. "Unfortunately André did not turn up despite being released by his club and air tickets provided by the GFA [Ghana Football Association] for him to travel from France."

Ayew's absence will hamper four-time African champion Ghana in its attempt to end a 30-year wait for a continental title.

Ayew has already appeared in three African Cups and scored two goals in last year's tournament in Gabon and Equatorial Guinea before Ghana was beaten narrowly in the semifinals by eventual winner Zambia.

Ghana is grouped with Congo, Mali and Niger at the Cup of Nations in South Africa and opens its tournament against Congo on January 20. – Sapa-AP